by Team NH
in Your_Stage
2

“Seventeen has continued to inspire us, carats from every aspects of their life. Their friendship inspires our own, their passion gives us strength to follow our own dreams. They make us look back and help us grow along with them. Their youth story has encouraged us to make our own and spread love wherever we go.”
At present, India is still a developing country with an alarming rate of population growth. Due to population explosion and other social issues, poverty has existed in India for decades. It is very hard for people to survive under such unfavorable circumstances, especially during this pandemic, as there has been an increase in prices hence resulting to lesser access to essentials. Many homes and helping hand institutions, mostly depend on donations in order to feed the hungry and needy.
Donations play a huge role in the lives of the underprivileged and also help change lives, which is why it gives Namaste Hallyu immense pleasure to bring to you, stories and amazing deeds done by the Indian Hallyu fans. Welcome to our, YOUR STAGE, here we do our best to find out about the various charitable works done by various fandoms and curate their stories to you. This platform isn’t just limited to charity works, we also feature fandom achievements, performances, artworks, and more! 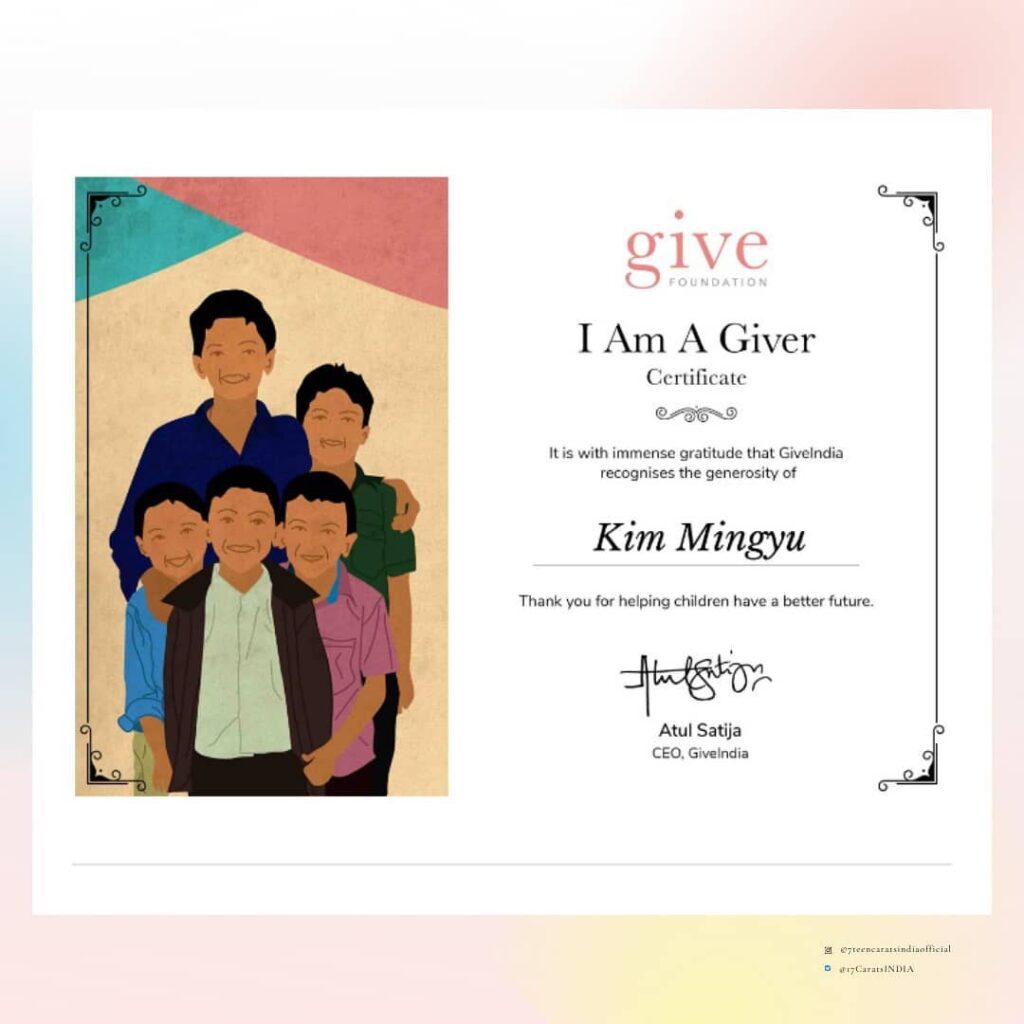 Indian CARATs (@7teencaratsindianofficial), in light of Kim Mingyu’s Birthday, decided to donate to ‘Give India’ to feed the malnourished. One of the most prevailing disease in India is malnourishment. While looking for charity projects, the girls happened to come across Give India’s donation project for malnourished children. CARATs even read up many articles on undernourishment and decided to join the monthly initiative. They said,

“As we all know malnutrition is a pressing issue in India. A lot of kids suffer from malnutrition from the age of 5. We read some articles about malnutrition in India and we came to know about 2 out 3 kids die due to malnutrition.  68% of under-5 deaths in India was due to child maternal malnutrition. It is not just about kids being hungry, its also about kids not getting proper or enough nutrients which they actually need. Especially during Covid times it is much more difficult for the kids to get proper nutrition which is why we decided to join this monthly initiative.” 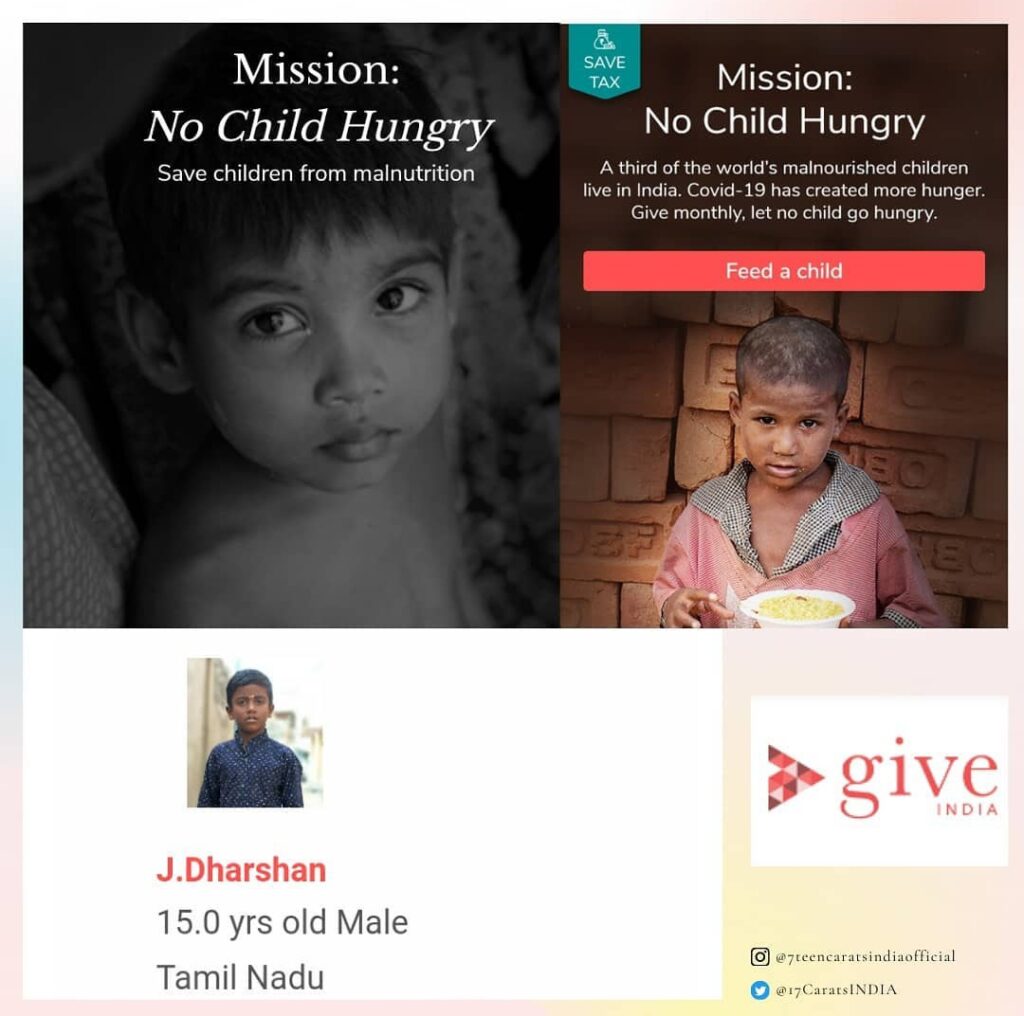 ‘Give India’ sent them details via email, about a 15 year old boy named J. Darshan, hailing in Tamil Nadu, who is now being supported by this fandom. ‘Give India’ believes it is a sensitive matter and hence donors cannot meet their beneficiaries personally, but a monthly report regarding their health will be provided. The fandom has currently planned to support Darshan for as long as their fellow donors wish to donate. An amount of ₹ 1000 per month will be donated and with this contribution, Darshan will be provided with pulses, sprouts, health drinks, fruits, and food items that are rich in protein and iron content.
This also not their first project. They have been CARATs for 4 years now and are continually inspired by their idols, Seventeen,  to give more to the society.  Some notable projects are:
Seungkwan’s Birthday Project
“To celebrate Seungkwan’s 23rd birthday, the admins of 7teencaratsindiaofficial decided to #AdoptATree with WWF India and pledged towards helping conserve nature for a safer and sustainable world.”

Joshua’s Birthday Project
“On the occasion of Joshua Hong’s 25th birthday last year i.e. 30th December 2020, CARATs pledged to stand up for Wildlife as due to lack of protection, care and extreme pollution, its pushing species into brink of extinction. CARATs thus joined in with WWF India to contribute towards Climate Change and endangered species  as the Earth needs us now more than ever. We Stand for the planet with WWF INDIA.”

.
Besides this, they also did fun projects among the fandom. For eg, on the occasion of Woozi’s Birthday, they came up with projects to get the whole fandom involved.
Woozi’s Birthday Project
1. HOME [ SEVENTEEN] X HOSANNA [A.R. Rahman] MASHUP
“Indian carats took part in composing the music and sing ‘Home’ by Seventeen and ‘Hosanna’, a song from the Bollywood movie ‘Ek Deewana Tha’. Indian Carats have put in a lot of efforts in playing their Instrumentals and combining their vocals together.”

2. “Carats also whole heartedly participated in writing the lyrics to SEVENTEEN’s campfire as they wanted to show their love for Woozi and how much he has helped them through his songs. You can listen to the original lyrics to campfire music made by the fans.”

It is so heartwarming to see such great deeds done and see such talented carats. If you are a CARAT or a Hallyu fan who wishes to help them with the funds, you can reach out to them. You can share this with your fellow CARATs and K-POP fans, or anyone that you think might be interested in participating in such a great charitable work.

It gives us so much happiness that Indian fans belonging to different fandoms involve in such charity activities. We will be back with more such stories, until then, check our other ‘Your Stage’ stories, stay tuned to our website and do follow us on Instagram for quick updates and more –@namaste_hallyu @namastehallyustudio