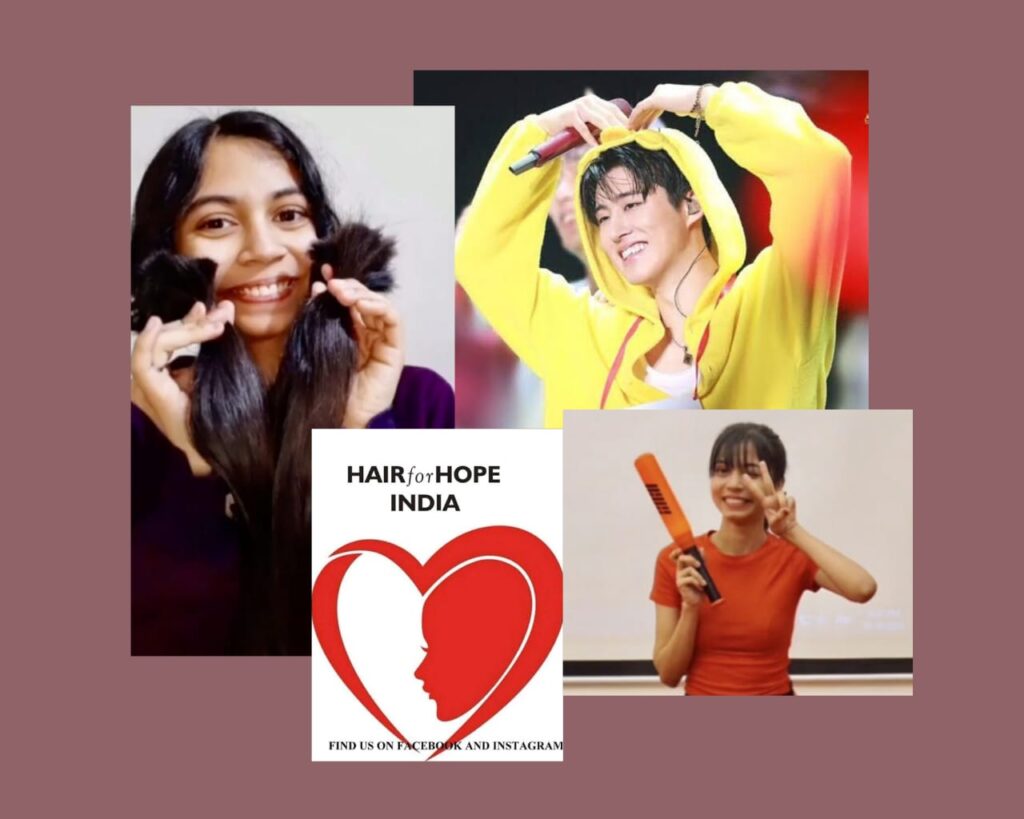 As K-Pop spreads its roots more and more in India, various fandoms have emerged and has kept fans connected and updated about their idols and favorite artists. Like how Korean idols and artists are known for their philanthropic activities, their fans too take after them and help those in need. There have been many instances and many stories about the philanthropic works of fans, some known and many unknown, but now we bring to you one of the many stories, after all this is YOUR STAGE.  Your Stage tells your story, your fandom achievements and showcases your talent.

This story is about a young woman, a Doctor, fresh out of college who shared with us her story. After meeting cancer patients during her internship, she learned the depth of what they go through, which led to her kind hearted hair donation of about 12 inches long. This is Doctor Richa. When asked about how she felt, she said, “Most of them lose all their hair after chemotherapy or radiotherapy and they cover their heads with a chunni/scarf.  I always felt inspired by just talking to them”. She thus decided to donate her hair and she dedicated this donation to iKON’s former leader and member, Kim Han Bin aka B.I.

A post shared by HAIR FOR HOPE INDIA (@hairforhopeindia)

HAIR FOR HOPE INDIA is an NGO that holds many events pan India aim to create awareness about hair donations. It is also a place where men and women can donate hair, which are then made into wigs. They accept 12 inches long hair and it can be sent to them via courier, eliminating the distance challenge.

To celebrate the comeback of her bias – B.I,  Dr. Richa celebrated in a unique way. When we asked her about the inspiration, she talked about how she admires B.I’s tireless efforts ever since he was young and continued to spread love, despite all bottlenecks and controversies that came along his away.

“He is such an inspiring person, almost as the same age as me, but the hard work he puts into every single task is beyond comparison. Not just as an artist, but as a human being. Ever since then I knew he guides all iKONICs well. He never let us down and always encouraged us to do better.”
– Dr. Richa

Dr. Richa is a huge fan of iKON and is impressed by the fact that the boys themselves contribute in their tracks’ activities like lyrics, arrangement, composition, choreography, and production. But the more and more she learnt about them, especially B.I, she continued to be impressed and he is now her ultimate bias and so, she wants to “follow his path too.” This is also not the first time she donated her hair. She has earlier donated it in 2019. 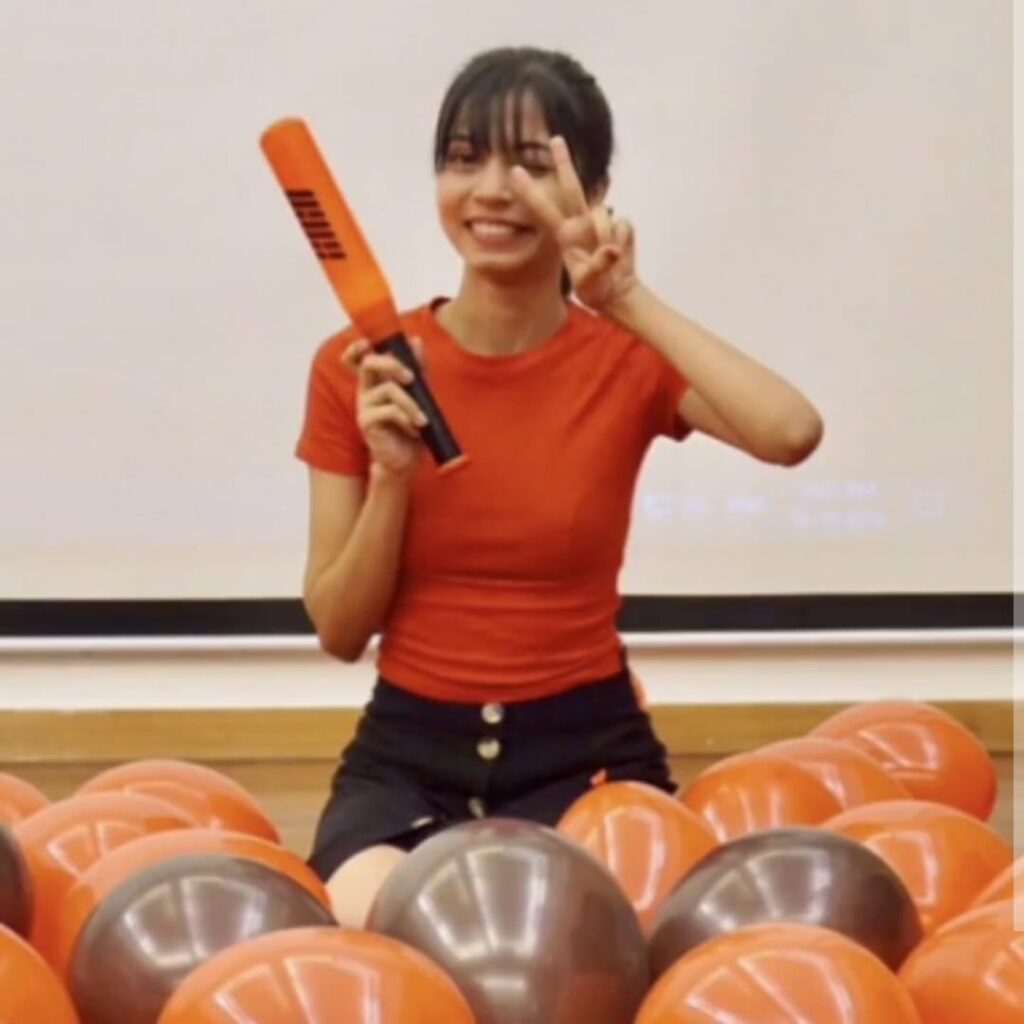 B.I is known not just for his work as an idol but also for his dedicated philanthropic activities. It was revealed on March 10, 2020, that Han Bin teamed up with SBW, a clothing manufacturing company, the he personally participated in distributing essentials like masks, under garments, and many health products to fight the ongoing pandemic, especially when it was at its peak.

Prior to his album comeback, he made his first appearance in a long time in Epik High’s 10th album, for the track ‘Acceptance Speech.’ And after a long hiatus B.I. made his comeback with ‘Midnight Blue’ and even started his own label named as ‘131 Label.’ As fans celebrated the comeback, it was announced that the royalties and proceeds from this album will be donated to World Vision. This is not the first time he has donated to this NGO. World Vision Korea is a Christian relief, development, and advocacy organization that is dedicated to protecting children’s rights to life and eradicating poverty.

In fact, 131Label India, a fan page for Kim Han Bin also participated in donating a sum of ₹10,131  to World Vision India.

Kim Han Bin may have had a comeback after a long time but his fans definitely showed him their continous love and support.

When the teaser of the MV ‘Midnight Blue’ first dropped, fans could not help but appreciate his thoughtfulness for the video was just the cartoon version of Han Bin but he communicated with his fans in sign language. The track, which is also animated, aims to give the listeners a warm sense of comfort, especially during their hard times all alone. It is an emotional, subdued ballad and many fans started to recognize that the MV was an inspiration of Han Bin’s life, as it is seen that the character finds comfort in his mother’s memories and dwells in it. ‘Midnight Blue’ is the title track of of his new solo album as part of the ‘LOVE STREAMING’ project. The album consist of three tracks, excluding Midnight Blue, ‘Remember Me’ and ‘Blossom.’

We at Namaste Hallyu are so proud of B.I and his Fandom. Dr. Richa for such a thoughtful contribution and the donations made by other fandoms via various platforms. We look forward to more of these humane activities from the fans.

K-POP Rookie Group ‘TOO’ Officially Changes Their Name to ‘TO1’

K-POP Rookie Group 'TOO' Officially Changes Their Name to 'TO1'