Many things happen as a result of Ji Ung's secret and Kook Yeon Su's pride.

Episodes 5 and 6 of ‘Our Beloved Summer’ are about a secret that can’t be revealed and the factor of pride that led to Choi Ung and Yeon Su’s split. 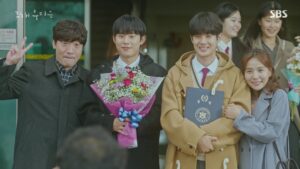 Since Ji Ung and Choi Ung share the same name, many items that were meant for Choi Ung ended up with Ji Ung. Ji Ung was envious of Ung’s family, the love he receives, and many other things because he was always alone. Ung’s selflessness, on the other hand, caused Ji Ung to love him even more, to have a family, and to adore him. Ji Ung is happy because Ung has provided him with a family. He was always willing to share his possessions and love with Ji Ung. They both dine together, ride bicycles together, enjoy family affection, and have been equally loved as sons. Ji Ung was overjoyed by this as well. Ji Ung and Choi Ung are both smitten with the same girl, Yeon-Su. Choi Ung loves her so much that Ji Ung had decided to bury his feelings for her and support him as a friend and brother instead.

When a friend and a camera get together, things go a little crazy.

Yeon Su’s best friend, Lee Sol Yi, manages a cafe. She has been a friend of hers for over a decade. Sol Yi always tries to promote her cafe when Yeon Su was in her bar filming the documentary, and she requests the filmmakers if they can film her cafe and upload it. Unfortunately, at her cafe, she never has a single customer. She discusses her past experiences in front of the camera. Choi Ung and Koo Eun Ho end up at her restaurant (much to Ung and Yeon Su’s awkwardness) to eat some octopus. Koo Eun Ho, Choi Ung’s manager and buddy, spends a lot of time in front of the camera, talking about how he met him and why he finds him interesting.

Yeon Su visits Choi Ung’s house and asks her to sleepover at his house. At the house, Yeon Su discovers Ung’s habit of eating sleep-inducing medicines Before she can say anything, he falls asleep and assures Yeon Su that he will not fall for it again since it hurts him so much. Yeon Su makes the decision not to tell him about what happened that night. Choi Ung wakes up refreshed as he has never slept so well for a long time as he did last night. It indicates that he feels at ease with her and that he could rest and sleep well.

Choi-Ung learns that Yeon-Su has returned to the neighbourhood, so he goes to meet her and informs her that he remembers her spending the night at his house. He confronts her and tells her that they had such a deep relationship that they can simply ask each other, “How are you doing?.”

Why did we break up because of pride? 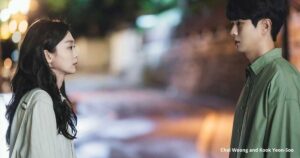 Yeon Su had friends, but because she was impoverished, she never wanted to hang out with them. Her friends have always considered her a selfish person because she never goes out with them but accepts the gifts they give her. That shrunk Yeon-Su dramatically. When she was with Choi-Ung, she forgot about the rest of the world. She was being herself with him. But then she began to have a second thoughts. She didn’t want to end the relationship, but she was worried that he had picked up on her inferiority issue. Her pride assured her that she could live without him, but she found it extremely difficult. 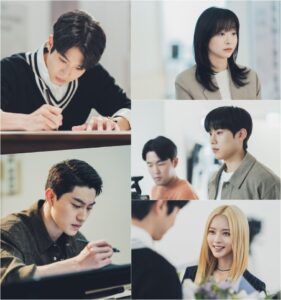 Choi-Ung had done art before, but Yeon Su had never seen him so serious as he was in the video and live event. She feels relieved that he has made his dreams come true. While creating the work of art. Choi Ung becomes serious, his eyes gleam brightly, and he exudes self-assurance. Yeon-Su has never seen him in this light before. NJ shows up to his live performance and is shocked to see him in this way.

Our Beloved Summer is off to a great start, with a great blend of comedy, romance, and drama, even though Choi Ung and Yeon Su romantic reunion by the end of the show may be a bit predictable.

The flashbacks provide further context for Ji Ung and Choi Ung’s relationship. It allows viewers to witness both Ji Ung and Choi Ung’s perspectives on why they love Yeon Su so much. While the show’s concept is simple, the chemistry between the stars and the cinematography are two of the most attractive reasons to watch it.

What did you think about episodes 5 and 6? Let us know in the comments! We’ll see you next week for Episodes 7 & 8!