On December 26, Kep1er took to their SNS channel to announce the new countdown schedule for their debut with a mini-album title ‘FIRST IMPACT.’ 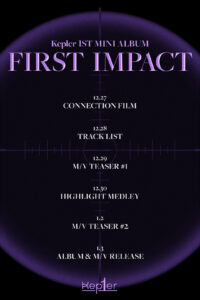 The concept images for the upcoming debut were released earlier and recently the group released a ‘Connection Film’ in which the members could be seen focusing their attention on the telescope giving a sci-fi vibe as intense music plays behind. The tracklist for the mini-album will be released on December 28 and ‘Wa Da Da’ will be the debut title track of the group.

The group consists of the top nine ranking contestants of the survival show ‘Girls Planet 999’, which featured trainees from China, Japan and South Korea competing to be selected for their debut. The final debut line was supposed to perform at MAMA 2021, prior to their debut but unfortunately one of the staff members ended up testing positive for COVID-19 followed by two of the members, Xiaoting and Mashiro, therefore pushing the debut date by an indefinite period.