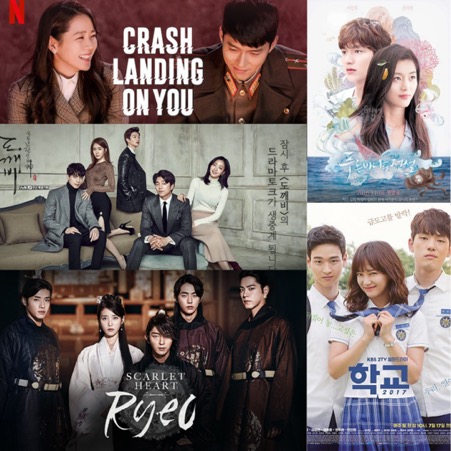 As someone new to K-Drama, you have a wide list of drama/genres to choose from and when you have entered the K-Drama zone and you’re craving for more, you need to be able to find dramas that pipes your interest. So, if you’re feeling overwhelmed with the choices, don’t worry because we are back with a whole new set to add to your watchlist!

(Pro Tip: Keep a box of tissues handy and play the OSTs whenever you miss the drama)

This is a multi-starrer drama that tends to leave a deep impact on the viewers. You might find yourself emotional over various scenes so embrace yourself for it.

The story starts with IU’s present character named Go Ha Jin who was betrayed by her boyfriend and best friend. A total eclipse of the sun takes place that takes IU back to the Goryeo era where she meets the king and the princes. Her chemistry with each of the prince is portrayed interestingly. The politics inside the royal family and fight for the throne is another element that will make you want to hang on to this drama. This modern mythological series was also the debut for EXO’s Baekhyun in the world of acting.  Make sure to stick to the end to know which of the prince wins over IU’s heart! Grab your popcorns, a bucket of ice cream, and embark on a journey with this masterpiece.

Time to state facts! This drama is definitely worth your time. Legend of the Blue Sea is a drama with components of rom-com, fantasy and good humor. It follows two settings- one in the current era and the other in the Joseon era. The main story is set in the present period and also takes us back in time to learn the backstory of the main characters.

A mermaid Shim Chung (Jun Ji Hyun) who has never been on land before follows Heo Joon Jae (Lee Min Ho), a highly skilled scam artist to the city. Adjusting her life on the land is hilarious as Shim Chung strives to learn human emotions, language, and lifestyle. With nowhere to go, the con man takes her in and does the unexpected which makes the mermaid fall in love with him. You will find yourself falling for the lead couple because of their chemistry.

Fun fact: This drama was the last acting project for superstar Lee Min Ho before his mandatory two year military service (which he has already completed) and the first acting role for Jun Ji Hyun after giving birth to her first child.

3. Guardian: The Lonely and a Great God (Goblin)

No. of episodes: 16+3 special episode

Goblin is a modern fantasy rom-com where goblin Kim Shin is cursed with immortality and can rest in peace only when his bride helps him relieve his pain who happens to be Ji Eun Tak. However, the story isn’t as simple as that and fate has something else planned for them. What appears to be an easy task becomes complicated when the two fall in love.

The first few episodes gives us funny moments between Ji Eun Tak (Kim Go Eun) and Kim Shin (Gong Yoo) and then takes a dramatic turn when you find out about the long and sad history of the characters.

The story of Goblin isn’t only about Kim Shin and Ji Eun Tak. Our second lead, the Grim Reaper (Lee Dong Wook) and Sunny(Yoo In Na) are mysteriously connected in the past and share a beautiful bond. Want to find out how? Head over to watch the drama! Apart from its historical and mythological aspects, the drama offers a blend of romance, history, comedy, action, and even an adorable bromance that keeps you attached to it along with one of the best OSTs.

At a glance, School 2017 might seem like a typical high school cliché but its realistic take on contemporary school and social issues makes it stand out.

This drama portrays the realistic troubles that high school students face. Ra Eun Ho (Sejeong), a cheerful female lead whose dream is to be a webtoon artist and get good grades, tries to survive in a school that discriminates between the social classes. Joining her is Hyun Tae Woon (Jang Dong Yoon), the son of the school’s director who is uptight, rude, and has a troubled past. These two opposite personalities clash and they eventually fall for each other. Together with their fellow students, they stand against their corrupt school system to make a change.

5. Crash Landing On You

2020 has been a year of staying in and it won’t be an exaggeration to say that this drama made passing time a little easier. It also made a great impact on enhancing the Korean wave across the globe topping the Netflix charts across various countries including India and introduced more people to K-dramas and even brought back the ones who left. Crash Landing on You is a perfect combination of romance, family, friendship, and fashion and is a drama that will make you ponder upon and wish for more episodes.

Yoon Se Ri (Son Ye Jin) is a successful South Korean businesswoman who is also the heiress to a big company. On the other hand Ri Jeong Hyeok (Hyun Bin) is a diligent and dutiful North Korean army captain. Yes, you read that right! This drama will show you a blend of North and South Korea and the contrast of life in the two nations. Se Ri gets caught in a tornado while testing out a Seri’s Choice product – a paragliding equipment and “crash lands” inside North Korea. Captain Ri and his four unit members agree to help her return to South Korea against all odds and love blooms at unexpected times and can be agonizing too. But in this adorable ‘you and me against our separated nations’ story, it’s impossible not to root for the forbidden love between Yoon Se Ri and Ri Jeong Hyeok.