ONEWE is 'Still Here' with fans

On 4th October, RBW Entertainment’s band ONEWE made a comeback with their new song, ‘Still Here’.

The song is a run-up to the release of their third demo album STUDIO WE: Recording #3 which is scheduled to release on 18th October. STUDIO WE: Recording is a series that captures ONEWE’s process of creating tracks, and includes guide versions of the songs based on the original ideas. The upcoming album will include ‘Still Here’, as well as the demo version of their second mini-album Planet Nine: VOYAGER, which was released earlier in January 2022. 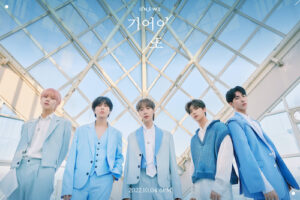 With Yonghoon and Kanghyun having enlisted in the military earlier this year, ‘Still Here’ was prepared and completed before their enlistment and fans got to see ONEWE as the complete 5-member group. The emotional rock ballad, written for fans by Yonghoon, expresses longing for a changed relationship.

Have you watched the ‘Still Here’ MV yet?

Let us know what you think about their new song! Stay tuned with us for updates and more.