“Why Korea?” asked Gandhi as the girls smiled warmly and answered, “We are BTS Army.”

On September 20, 2022, Rahul Gandhi took to his official Twitter account to share an endearing video with some school-going girls he met during his visit to St. Michael’s College located at Cherthala in Kerala’s Alappuzha district, on his 13th day of Congress’s 150-day long journey across India called ‘Bharat Jodo Yatra’. The video was titled, “A delightful chat with these incredible girls who are Kerala’s BTS Army!”

The girls engaged in a hearty conversation about their friends, teachers, and ambitions with the Indian National Congress member over Sharjah Shake, as he asked the girls not to be shy and called himself a ‘brother’ to them. 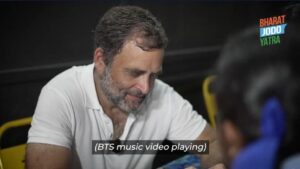 Amidst an intrigued Gandhi and the giggling girls, developed a new bond as Gandhi inquired what they liked about Korean music and the young fans replied, “When you’re feeling down, listening to their music is quite comforting.” Very well put. After which Gandhi watched a BTS music video with the girls.

Fans of BTS from and outside of India are showering their admiration for this video. 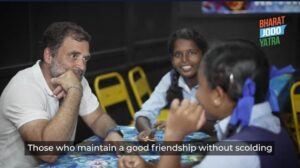 Fans of BTS from and outside of India are showering their admiration for this video.

BTS is one of the biggest names in the South Korean music industry right now, which means they hold influence over a lot of people all over the world, including young girls like these Kerala schoolgirls. They are a group of seven including RM, Jin, SUGA, J-Hope, Jimin, V, and Jungkook. BTS have broken records all around the world with their music, and have been nominated for the Grammys twice. They donate to causes whenever need be and have spoken at the United Nations more than once. With so much under their belt, it is no wonder why the septet keeps inspiring people around the world on a day-to-day basis. Some of their most well-known songs include ‘Blood Sweat & Tears’, ‘Black Swan’, ‘Fire’, ‘Life Goes On’, ‘Butter’, ‘Dynamite’, and does the list ever end? They even have record-breaking solo projects. Currently, BTS members are on a creative break and focusing on their solo careers.

Watch the video here and let us know your thoughts.

A delightful chat with these incredible girls who are Kerala’s BTS Army! pic.twitter.com/MVtHsCKkrT