by Varsha Alan
in Review
2

Na Bi’s feelings for Jae Eon continues to grow and even with the expected arrival of disappointment, she  plans on seeing him more often.

“At least if I was drunk, I could have used that as an excuse”

This night wasn’t just for Na Bi and Jae Eon, but also for Bit Na and Nam Gyu Hyun! Drunk Bit Na kissed Gyu Hyun who also kissed her back, and this is the start of their lovey-dovey relationship! They just need time. The story will probably unfold the clichéd way, but Team NH is really looking forward to how both of them finally realize what they feel about each other. It is just adorable when your best friend becomes your boyfriend/ girlfriend. That’s a different kind of love!

We hope the production team doesn’t crush our expectations 🙂 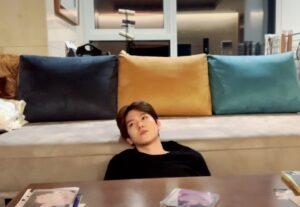 It is just impossible to put away the fact that Jae Eon likes Na Bi. Though he isn’t looking for commitment, he isn’t just in it for the physical intimacy. After all, they spend time dancing, helping out with chores, eating together, and there’s also a lot of canoodle, sweet nothing, and more. Let us also not forget that he was nursing her the entire night when she was sick.

He even gifted her with the butterfly sun catcher he was working on. 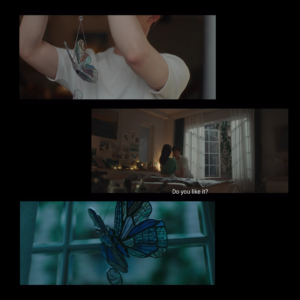 When Na Bi was having a bad birthday, Jae Eon was there to save her day. It almost feels like a sweet relationship, it is in their hands to sail or sink it, especially Jae Eon’s hands. But just when we thought, perhaps this is leading towards something good…

THE SECOND LEAD IS HERE! 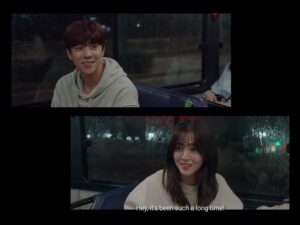 Yang Do Hyeok is an old friend of Na Bi’s whom she hasn’t seen in 10 years. Destiny allows them to meet on a rainy day in a bus. Does he look familiar? Let’s go back to episode 3 for a bit. 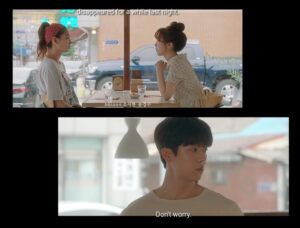 We just realized that the production team introduced him in the 3rd episode and we didn’t read it. 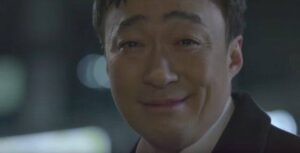 Do Hyeok walks Na Bi home since he had an umbrella on him and even gives it to her while he went home drenched. It was a cute scene.

And it also looks like she had a special place in his childhood memory, or at least this scene indicates that. 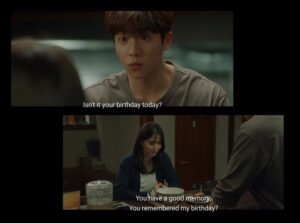 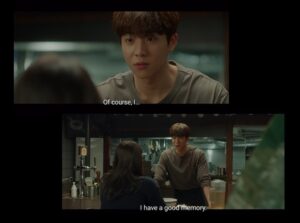 Episode 4 did not have much for them, Ji Wan is still upset, hurt, and mad at Yoon Sol and she’s been avoiding her. Things for them haven’t progressed much, yet. 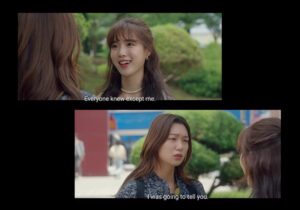 From the 1st episode Bit Na has made it clear that she’s an openly promiscuous person and Gyu Hyun is a little old school. He’s never criticized her for it and has been pretty accepting, but there are days when the concept just goes past his head. 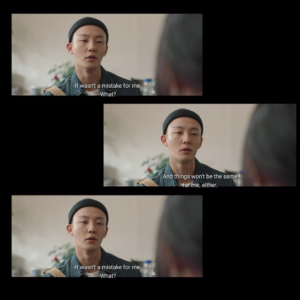 Getting physical with Bit Na is of course not something that can be easy for him, given their friendship and he also doesn’t call it a “mistake” like how Bit Na does. 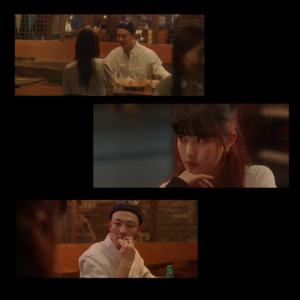 While Bit Na was on a date-ish before their one night stand, she sees Gyu Hyun on a date with someone else. She gets infuriated, more like bothered, walks right in, sits in the table nearby and stares at him. Let’s wait and watch how things unfold for them.

Out of the Blue

Rumors start spreading like forest fires about Na Bi and Jae Eon’s secret, intimate relationship. She overhears two people talk about Na Bi and how they didn’t expect her to be very “open-minded,” etc. The rumors spread so much that even her ex-boyfriend, the professor, heard about this and came to see her. He was almost about to create a scene but Na Bi knocked him down, hard, verbally.

Looks like she didn’t really think much about the ‘rumor’ factor before getting involved with Jae Eon. Another reason to end things with him and takes it up. This part of the plot is just poppycock because factors like rumors are basic things one would think about before say yes to a no-strings-attached relationship. Moving on, she goes to Jae Eon’s work space to talk about this with him but the moment she made eye contact, butterflies were back. She goes blank and only talks about a small part of her feelings and before she could gather strength to tell him, that’s when a man looking for Jae Eon arrives.

What happened next, WE DID NOT EXPECT. 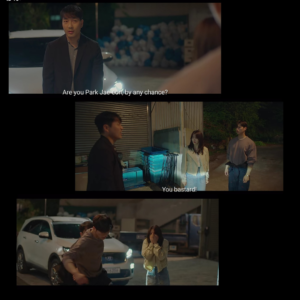 This was very out of the blue and Team NH has come up with so many reasons for this incident’s back story, mostly relating to him being a player and some rich girl involved. But we also expect our theories to be wrong. Well just a few more hours and we’ll know what’s happening!

For episode 4 we couldn’t come with much theories since everything was pretty much straight forward and was mostly about Na Bi and the leads, but hopefully from Episode 5 things start to progress for the second leads and we get to see them more on screen.

Let us know your theories and expectation about this drama. Comment or even tweet to us! See you for episode 5!

EXCLUSIVE: Up Close and Personal With ‘LIVIN’ The Band