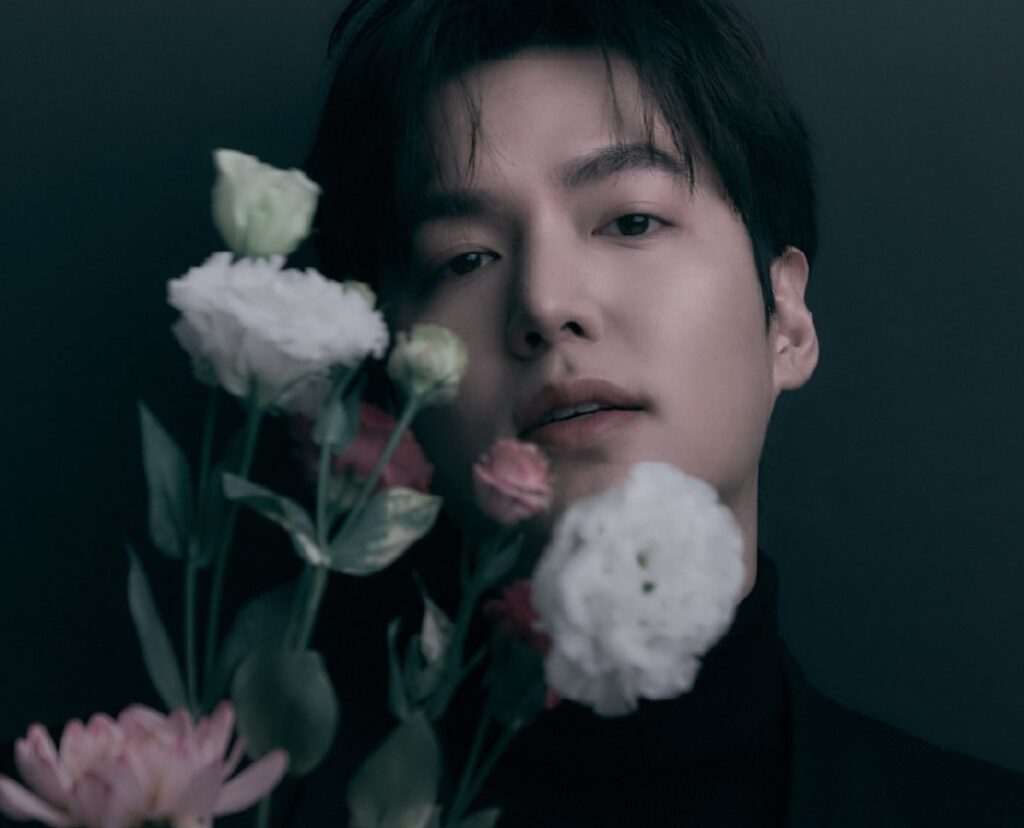 “Our fandom stands together with prayers for every single soul whose life has been affected by this deadly pandemic. The success of this campaign reinforces our belief that humanity shall continue to sustain despite all adversities. Differences in nationalities, ethnicities, cultures, religions and languages cannot prevent humans from reaching out to their fellow humans with a hand of assistance. As tiny as a spark may be, it does not take long for it to become a raging fire. Similarly we ardently hope that this one step of ours shall lead to similar attempts from others so that we all help each other throughout this crisis.”

K-POP and K-DRAMA fans have continuously been conducting fund raisers in order to help people with little access to health and sanitation, especially during these dreadful times and  during these thick times, it is the act of kindness that brings a bundle of joy to everyone around, which several fandoms have achieved.

“The second wave of the COVID 19 pandemic brought forth an unprecedented yet dire crisis for India and watching our people suffer on a daily basis without access to proper medical care caused severe distress to us. As responsible citizens, it was our duty to step up and attempt to provide assistance in any manner possible. It was well within our capability to garner financial support which is what led to the birth of this endeavor that was initiated by the admins of Minholics India.”

In today’s ‘Your Stage,’ we bring to you the story of Minholics India. Lee Min Ho has a widespread and dedicated fan base worldwide, and it is also no news that he has a strong and loyal fan base in India as well. Not only is Min Ho known for is exceptional acting, euphonious vocals, and obviously his stunning looks, he is also known for his compassionate heart. Lee Min Ho’s charity trust, Promiz, is one of his many philanthropic examples. He has set a great example to his fans, who very gladly follow his footsteps.

“The culture of looking up to public figures to the extent of idolizing them, while not uncommon, is deemed as unhealthy by certain factions. However, when the said public figure is an individual as socially aware and responsible as Lee Min ho, the fans and admirers are left with a positive influence on their minds. For Minoz, Lee Min ho is a role model who has consistently exhibited his tendency to give to back to the society and has never hesitated to utilize his privilege for the betterment of those who are less fortunate. The values that are ingrained in Lee’s personality are reflected on many who strive to know more about him. He does not miss an opportunity to express his admiration for his country South Korea without charging a penny for it. Along with his benevolent and compassionate nature, his humility and chivalry are what serve as a source of inspiration for many.”

The admins are not new to charity projects outside India. The fan base previously contributed towards relief good and supplies that were distributed to the people who were victims of Typhoon Ulysses that hit Vietnam and Philippines back in 2020.

In light of Min Ho’s birthday, the admins saw a good opportunity to be able to raise funds to aid COVID-19. The relief project being their very first charity campaign within India, they put in a lot of effort in researching to find a platform that was credible enough and free from fraudulency, which is how they got introduced to Give India. A total sum of ₹ 74,876 was raised and the entire contribution was fully credited to Give India’s account. They received support and contribution not just from Indian and Global Minos, but also from non-Minoz as well. People from countries like “France, Singapore and the United States for many rose to display their solidarity by contributing to the campaign.” 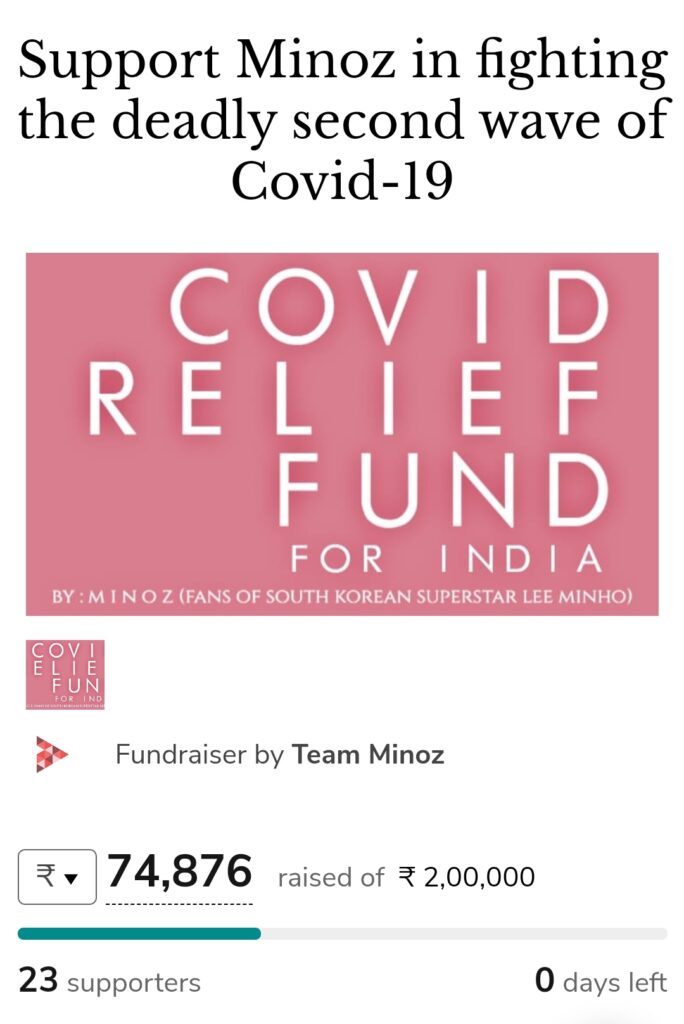 This project was not a cakewalk but their project began to propel soon after they received MYM Entertainment’s (label that manages Lee Min Ho) official seal of approval.

“We would convey our heartfelt gratitude to MYM Entertainment for placing their trust in us and for allowing us to associate their artist’s name in our endeavour. We are forever indebted to every individual that believed in us and contributed to this cause for every single penny counts. No contribution is small for its these little drops that make an ocean. Lee Min ho once said and we quote, “Let us do it together. We will cope with every difficulty together and will always be there for each other.”

For his upcoming birthday, they have sent him some gifts and the donation certificate which is scheduled to reach him on June 22nd. 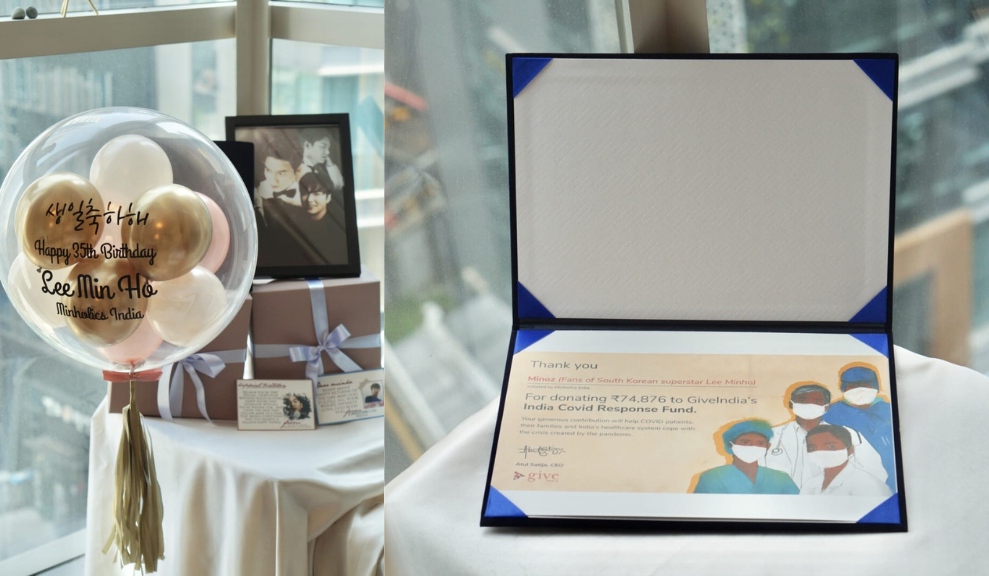 In the past, the fandom even sent gifts to Lee Min Ho whenever opportunities came up.

Amazing work Minholics India for raising a good amount of money to aid the people in need, we are so proud of you! And we are sure that Lee Min Ho will dearly love and appreciate your hard work and gifts! We also look forward to more such fan projects and we hope to see Lee Min Ho in India someday soon.

On our YOUR STAGE segment where, apart from charity works, donations, and fund raising events organized by K-POP fans, we also cover your performances, fandom achievements, artworks, and more!

Check out our YOUR STAGE articles to read about more such heartwarming stories! Here are a few to start with,

[YOUR STAGE[ FROZEN CREW’s Jonathan Speaks About Dance, Inspiration, The Crew, and More