It's history mode for 'Squid Game' at the 2022 Emmy Awards

Ever since South Korean show, Squid Game was released, the show has been taking the world by storm and sweeping several major awards across the globe. ‘Squid Game’ continuously manages to enter in TOP 10 Netflix watch shows across the world including India, even now and that shows how popular it is. ‘Squid Game’ became the  first Netflix show to have more than 100 million viewers in the first month of its release and has made another history once again at the 2022 Emmy Awards. 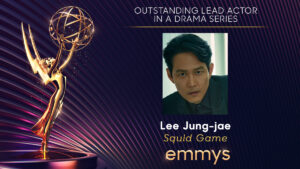 Lee Jung Jae took home the Lead Actor in a Drama Series for his role as Gi Hun in Squid Game. With this award, Squid Game’s Lee Jung Jae has become the first Asian star to win the Emmy award for best male actor in a drama.

After thanking the Television Academy, Netflix, Hwang Dong Hyuk, and the ‘Squid Game’ team, Lee Jung Jae also stated in Korean, that he wanted to share this joy with everyone watching from Korea, his friends, family, and dearest fans. 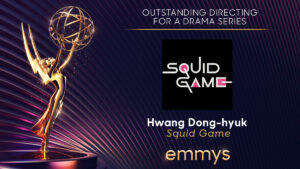 Apart from this historic win for ‘Squid Game’, Hwang Dong Hyuk also won Outstanding Directing for a Drama Series. This is the first-ever win in this category for a non-English language drama.

The director stated in his acceptance speech, “ I truly hope that ‘Squid Game’ won’t be the last non-English series to be here at the Emmys, and I also hope this won’t be my last Emmy either. I’ll be back with Season 2.” He also insisted that he did not make history by himself but rather history was created together by opening the doors and inviting ‘Squid Game’ at the Emmys.