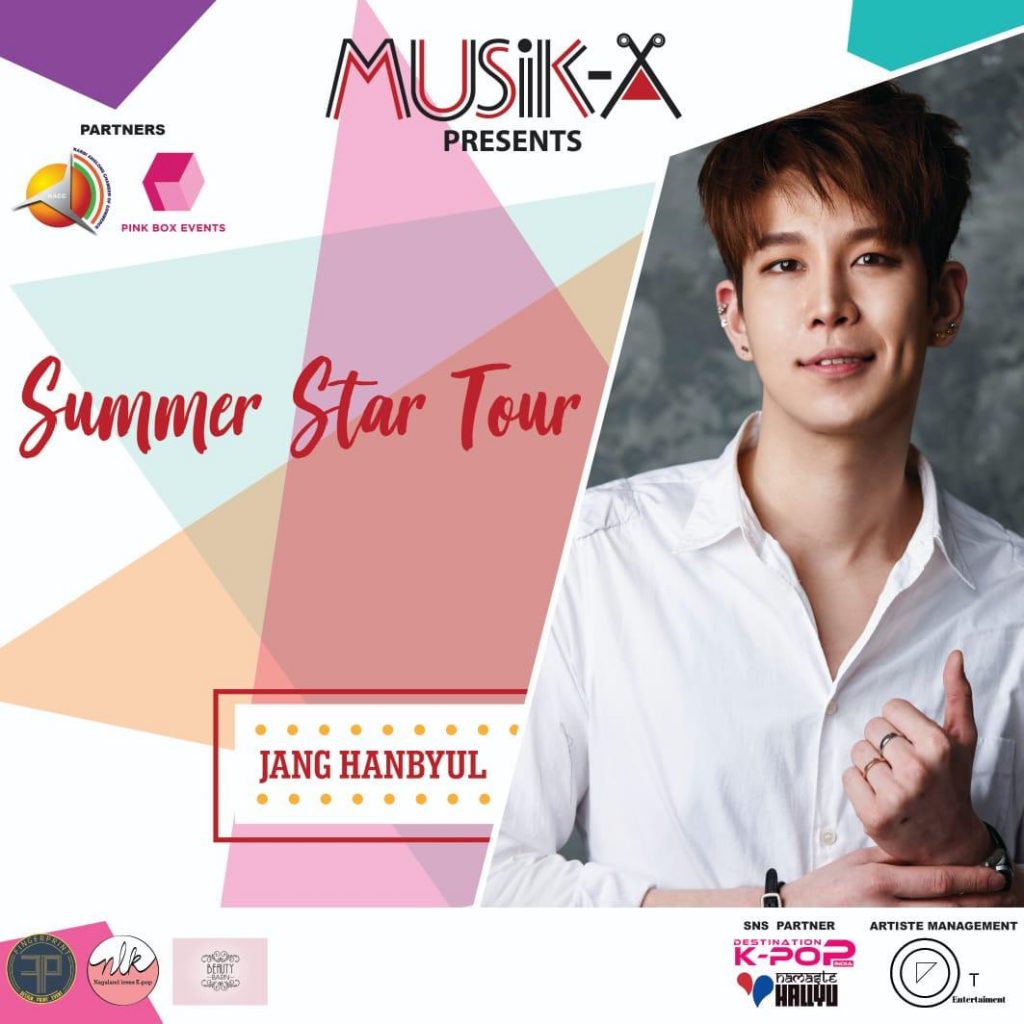 After weeks of teasers and hype, the solo artist that has been revealed to visit India is none other than, former front man of LEDApple, Jason Jang Hanbyul. LED APPLE was a popular Korean Pop Rock band which was formed under Starkim Entertainment. Hanbyul however left the group after some years and went solo.

Jang Hanbyul is not only an exceptional artist but has also had multiple experiences in different fields. Many fans would also know him as  the host in popular TV shows like After School Club, Simply KPOP, MNET US M Countdown. He has also appeared in multiple TV shows like Room of Secrets, Society Game amongst others. Besides cameos in Dramas like “To the Beautiful You”, “Reckless Family2”,  he has also sung OSTs for popular dramas like ‘Pretty Boy’, ‘Sassy Go Go’, ‘Remember’, ‘I Picked up a Star on the Road’, etc.

As part of LED Apple as well as solo, Hanbyul has toured many countries including Japan, Germany, Kazakhstan, Indonesia. This will be his first visit to India.

A quick background on Jason Jang Hanbyul, would let you know that he actually lived in Australia before moving to South Korea. He is fluent in 4 languages – English, Korean, French and Japanese. If that doesn’t seem enough, Hanbyul actually holds a Bachelor of Dental Science from the University of Queensland!

The date for the event as well as the venues has not been announced yet but as per the teaser pictures, it is scheduled to be held in 2 states and 3 venues. It is assumed that Nagaland and Diphu would be 2 of the venues as one of the organisers Musika is based in Nagaland, while one of the partners, KACC (Karbi Anglong Chamber of Commerce is based in Diphu (Karbi Anglong, Assam). Pink Box events which is the first company to have been organising KPOP events in India is one of the other partners. When we reached out for comments, we were told that more information regarding the venues would be revealed soon along with other details. It maybe mentioned that Pink Box Events had earlier posted a teaser picture which looked like they were preparing for more announcement. 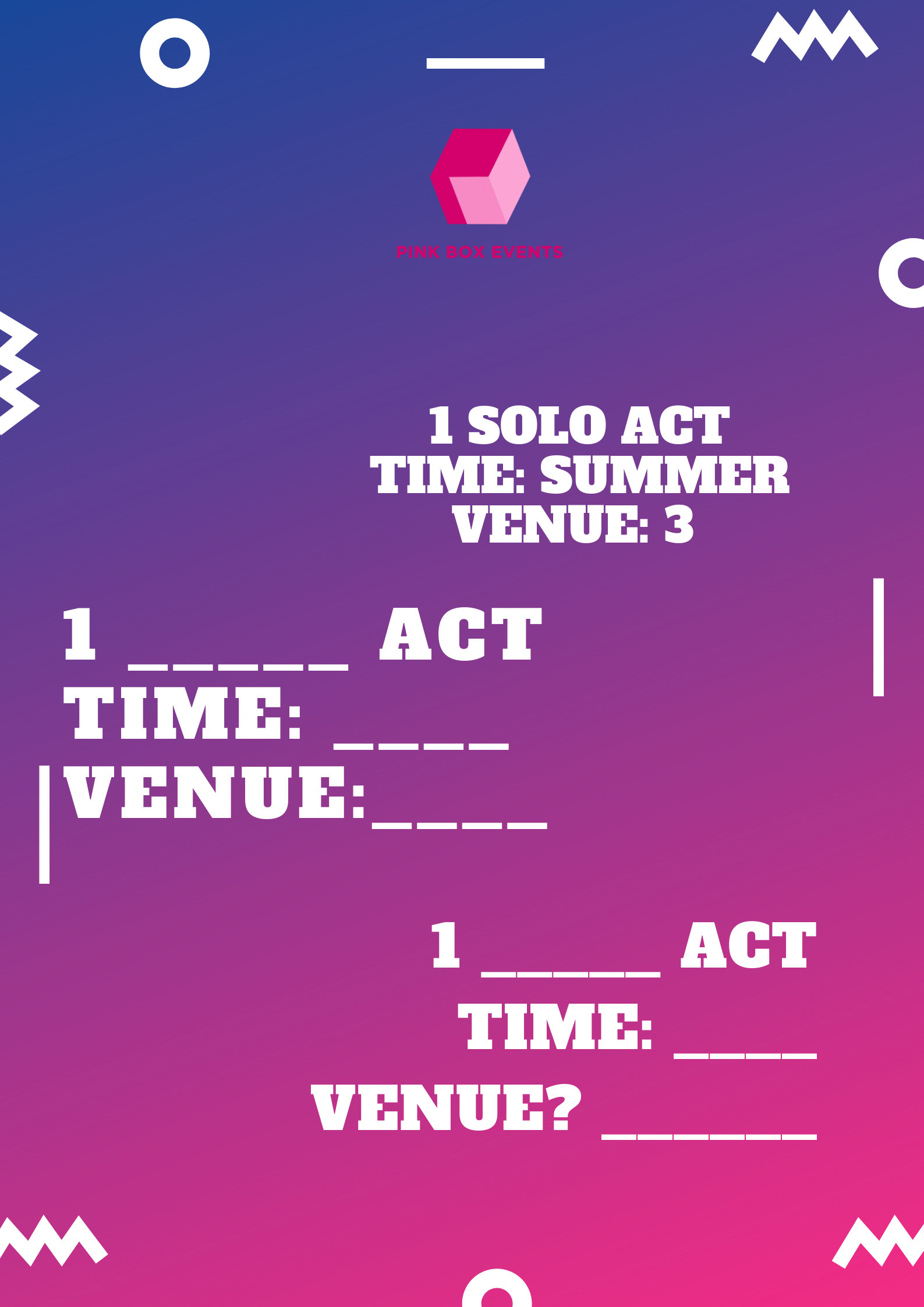 If we are to go by this teaser, it looks like we definitely have a lot to look forward to. In the meanwhile, don’t forget to follow Pink Box Events , Musik-A  and us for more details.

We are also happy to announce that Namaste Hallyu is one of the official SNS partner and we do have something special coming up tomorrow so, don’t forget to check in with us.

In the meanwhile, here’s one of Hanbyul’s original song and a cover –

10 Responses to “K-POP Artist Jang Hanbyul is coming to India!” 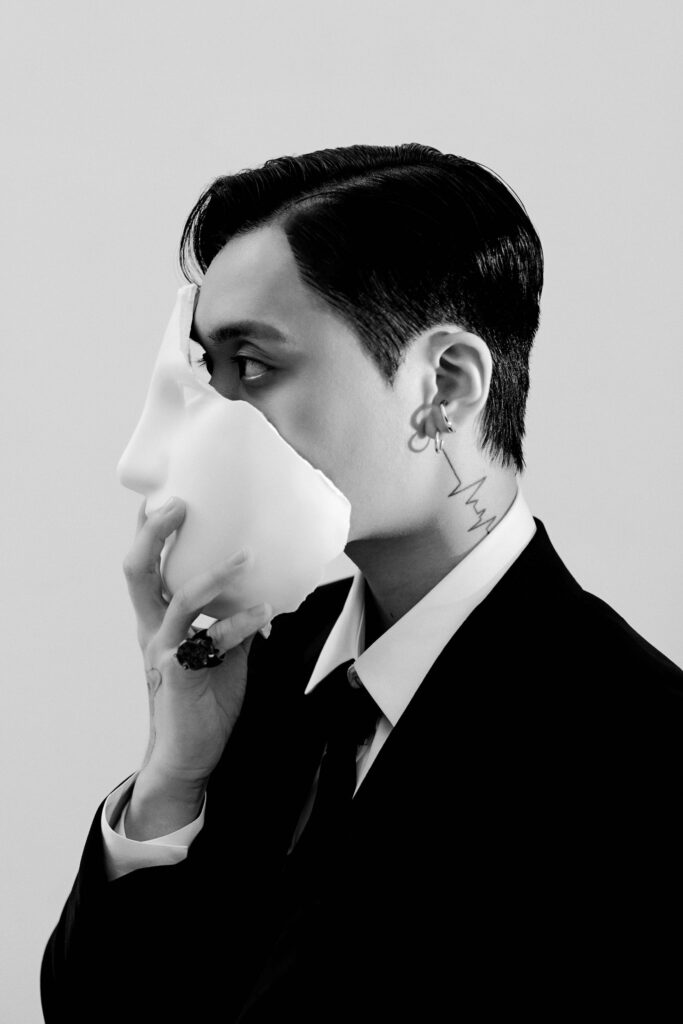 Namaste Hallyu is super excited to share our interview with our Artist of The Month – Singer and Songwriter Dvwn!

If you’re a fan of versatile Korean music, you might have definitely heard his song, ‘Being Left’ with Zico or ‘Fairy’ or even ‘Last’ and if you’re a KDrama fan, you must have heard him when listening to the OST ‘No Problem’ from the drama,  ‘The Uncanny Counter’ or you might have seen Park Shin Hye featured in his latest music video, ‘Free Flight’.

Soundcloud has been a big platform for various artists around the world, both popular and rising and this platform holds the stories of many world famous artists who initially started there including Dvwn’s musical journey. He gathered a lot of attention on Soundcloud and is known for his soothing melodies that are self-written and composed and this caught the attention of one of the biggest South Korean rapper, Zico. Dvwn is now signed with Zico’s KOZ Entertainment, a subsidiary of HYBE Corporation (formerly known as Big Hit Entertainment). 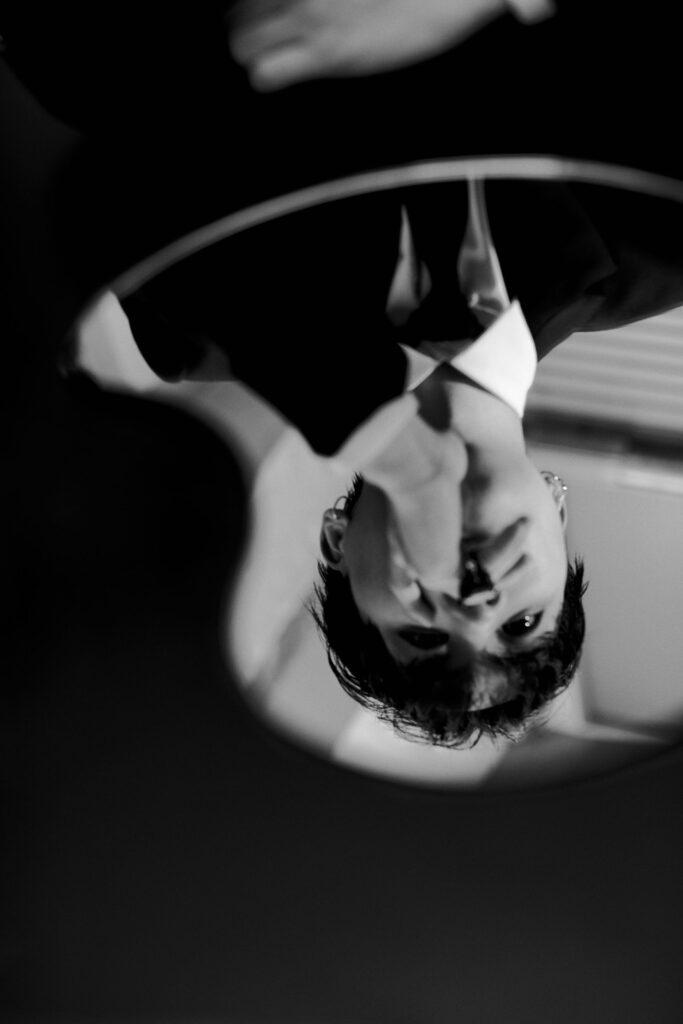 Dvwn has not only made music for his fans but he has also worked with various artists. Dvwn has worked with EXO’s Lay Zhang and Chanyeol, separately for ‘Mapo Tofu’ and ‘SSFW’. He further participated in SHINee’s ‘Heart Attack’ from their recent album,  ‘Love Yourself’ by Eric Nam, Babylon’s ‘Karma’, and had also featured in Kang Daniel’s track ‘Movie’. Dvwn has also received IU’s appreciation for his cover songs.

What we love the most about Dvwn is how he effortlessly shifts genre and makes it his own. Dvwn cannot be classified as one genre of artist and that is why, it is best to understand his style of music by listening to his music because he creates a genre of his own. But if we have to categorise him, then it would be ‘Versatile’. Ahead of his EP ‘It’s Not Your Fault’ releasing on the 14th of April, we got to speak with Dvwn. Read on to know about his musical journey, his inspirations, the upcoming EP and more, including a special message for his Indian fans.

Namaste Hallyu (NH): First of all, congratulations! You came back with a new single ‘Free Flight’ and it has been well received. What does the song ‘ Free Flight’ mean to you ? You have also mentioned that it was written and recorded two-three years ago, is ‘Free Flight’ in any way different from your album series ‘Dawn Defibrillation’- lyrically and musically?

Dvwn: Thank you very much! I tried to express a journey of flying into one’s dream to tell things that I wouldn’t be able to tell in reality, and then flying back to reality with clearer conscience with ‘Free Flight’. A friend of mine who is a producer wrote the song as an instrumental track, which we rearranged to complete it as it is now. This song was supposed to be one of the tracks in ‘Dawn Defibrillation’ and you will find many similarities but on the other hand, the topic of the lyrics and the genre form are quite different. ‘Free Flight’ is a song where I tell a story in a more calm manner.

NH: You have been giving us so many amazing songs. What is your process when you’re writing a song? Any musical artist/art in general that has a major influence on your style?

Dvwn: The music writing process differs for each song. I sometimes stumble across a word in my daily life and start from that word and sometimes I get inspired by a book. Most of the time, I start by just sitting down in a chair. The artists that influences me the most, changes all the time and recently, I’ve been most inspired by films directed by Yorgos Lanthimos.

NH: It has been two years since you released your first self-produced album, ‘Panorama’ and ‘Fairy’ still remains as your most streamed song from that album and since then, it has been a journey of so many amazing songs. Which is your favorite work so far?

Dvwn: My favorite work changes all the time. I always find myself liking the most recently written song the most and I believe that many artists would relate to that. Of all the released songs, I like ‘Free flight’ the most. It must be because I prefer calmer music nowadays.

NH: You mentioned in a previous interview about how The Black Skirts is one of your favorite musician, have you ever thought of a possible collaboration and how do you think it will turn out?

Dvwn: I do like The Black Skirts very much but a collaboration is a very difficult process. I feel that it would be better to keep my favorite artist as the favorite artist and nothing more but if I were to collaborate with him, I think the song will turn out to be a very rocking one.

NH: You have never been bounded by a single genre and in the past, you had mentioned that you would like to try ‘Gospel’ music, is that still the same or is there any particular genre that you want to try?

Dvwn: Yes, I still want to try Gospel music someday, as the majestic feel of the genre can’t be replaced by any other. Other than Gospel music, I would love to try to write psychedelic or alternative rock music.

NH: ‘Dawn Defibrillation’ has continued as a series and you have also expressed that it will be finalized as an EP or LP. So can we expect it in the near future?

Dvwn: I have currently pushed the project to a later time, and am focusing on the upcoming album. As it is a series, I feel that I would need more time to think about it. It will happen when the time is right.

NH: You had shared a snippet in your Instagram Story which seemed like a demo of ‘Free Flight’ but in English. If it is the English version, we were wondering if your fans would get a chance to listen to it.

NH:  You have recently sung the OST, ‘No Problem’ for the K-Drama ‘The Uncanny Encounter’ and it has been wonderfully received. How was the experience? If we are not wrong, isn’t this your first OST? In addition, is there an OST of any Drama or Movie in particular that you  like a lot?

Dvwn: Yes, it was my first time, and it was a very unique experience. I have never had anyone direct me in the recording process and so, it was awkward at first but I enjoyed the experience. I love the OST of Reply 1988, “A Little Girl” sung by Oh Hyuk.

NH: We heard that your new EP ‘It’s not your fault’ will be released soon. As it’s the first record after signing with KOZ Entertainment, we are wondering what kind of story it contains. Could you give us a spoiler before it’s released?

Dvwn: I think the listeners would find the album quite heavy overall. It contains many feelings and stories and its difficult to explain in a short sentence, but I would say the main keywords are sadness and loneliness. You will know what I mean when you listen to it. To spoil it a little, the album consists of songs with many different genres. Please don’t miss out on ‘It’s not your fault’. 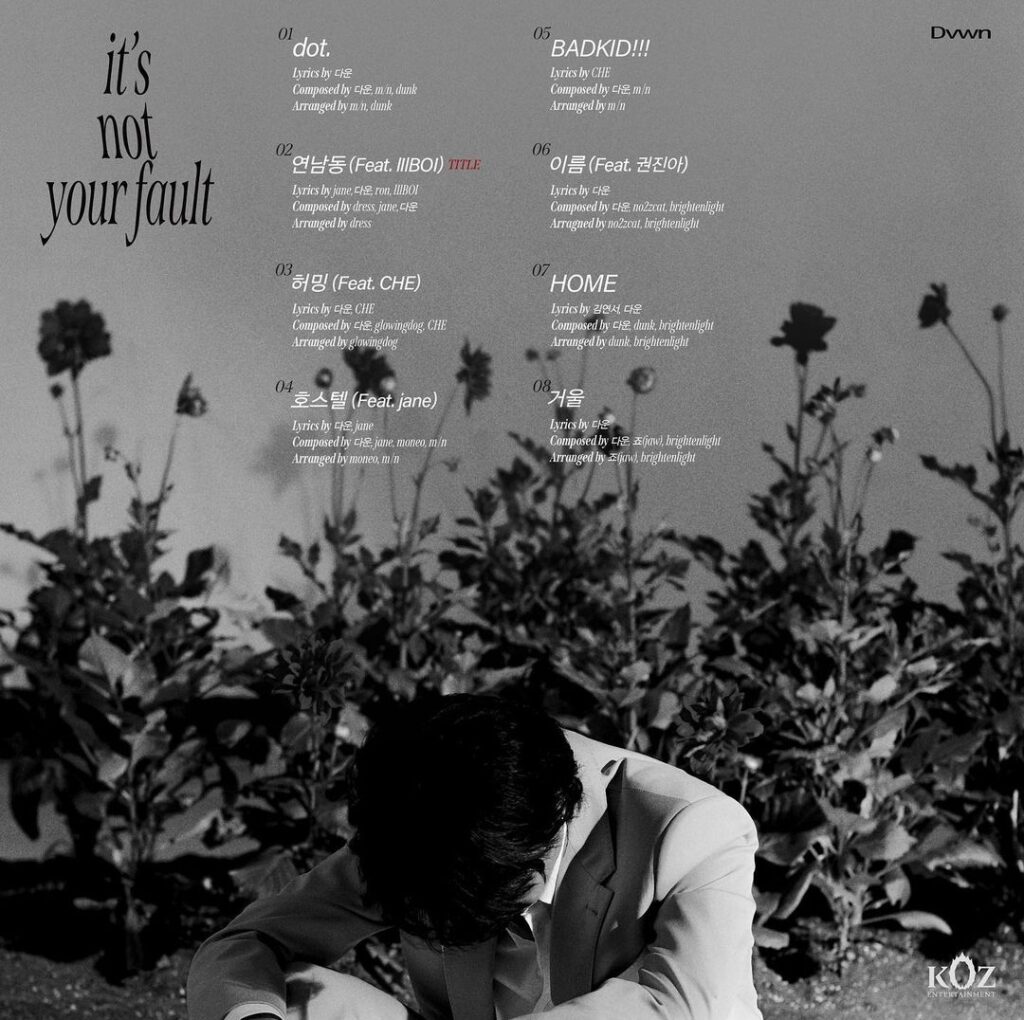 NH: Lastly, any message for your Indian fans and what to expect from you?

Dvwn: Thank you so much for listening to my music. I have been working hard to present good music to you. My new EP ‘It’s not your fault’ will release soon, so please look forward to it! Thank you so much again for all the love!

Dvwn has an intense passion for music and sheds light on the importance of fans being able to resonate with his music. We are very happy to have interviewed such a versatile artist who produces fervent music and we are grateful to Dvwn and KOZ Entertainment for the opportunity. We look forward to all the new music and we hope to see him perform in India, someday. 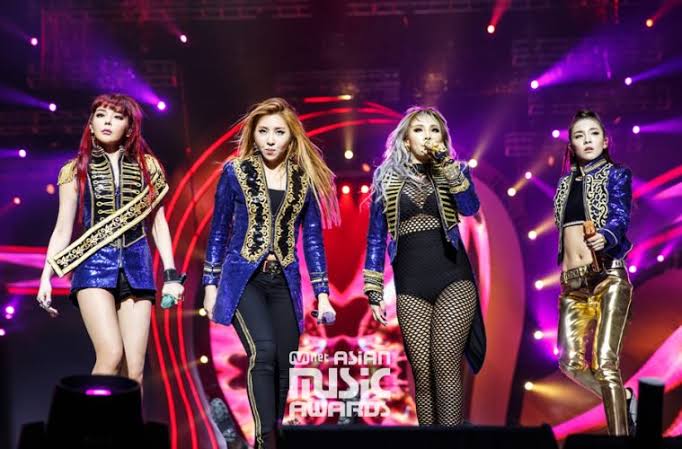 G-Dragon says he has been Working on Music and BIGBANG; Are we Getting a Comeback Soon? 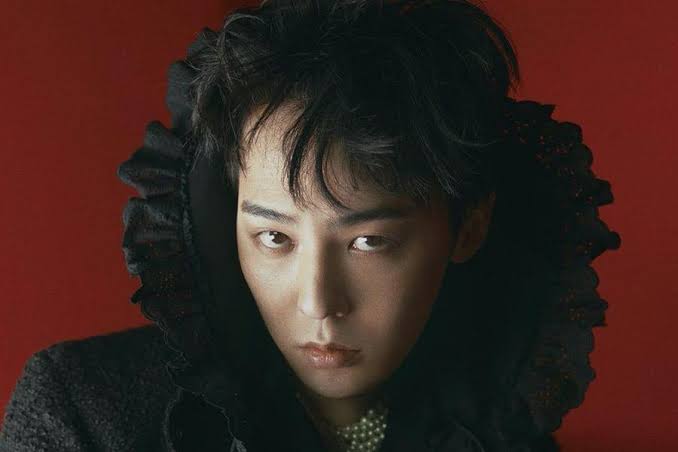 HYBE’s Debut Plans Under Various Labels – What to Expect? 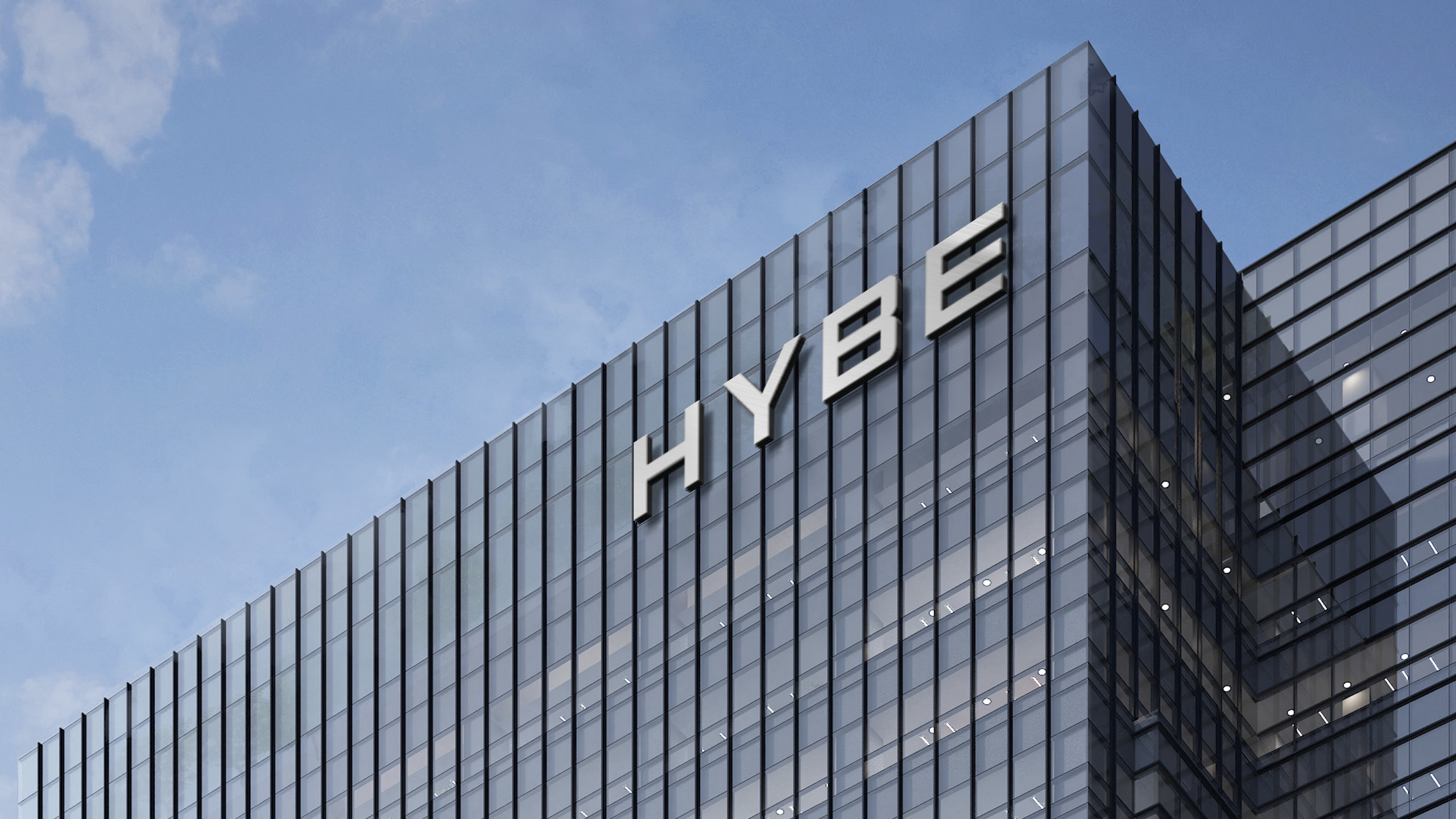 BTS LIGHT IT UP AT THE GRAMMYS! 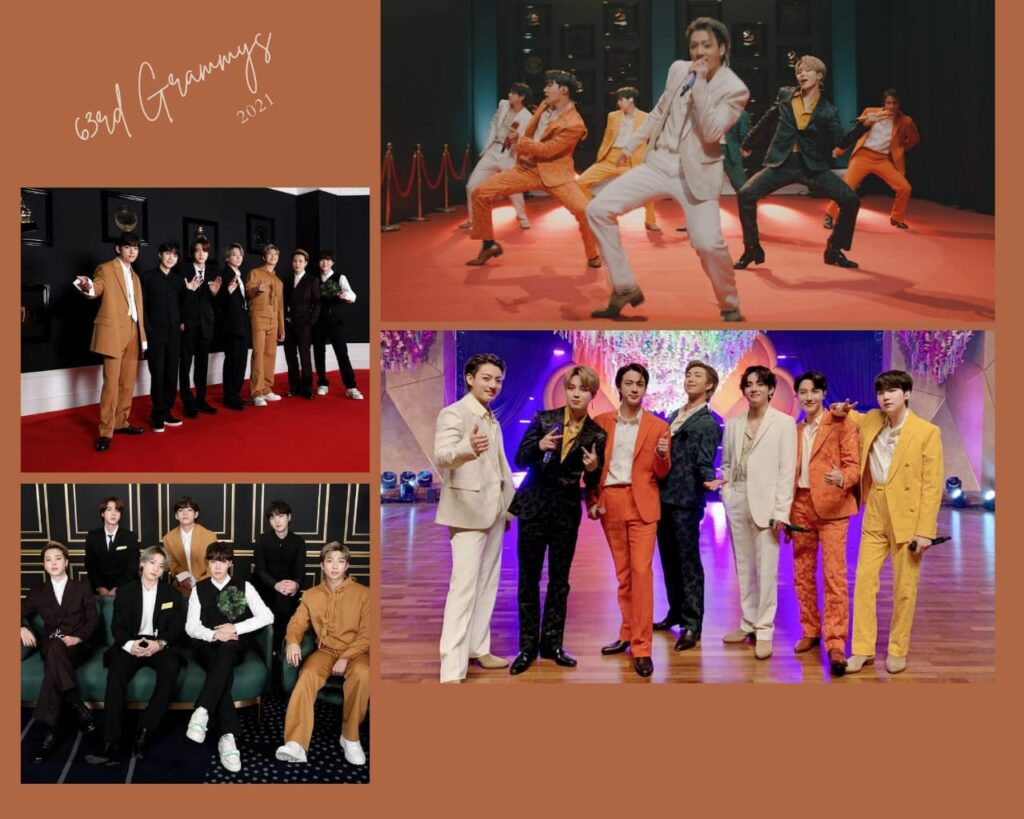 “We’ll Be Back With Great Music And Even Greater Performances That You Can Look Forward To.”- BTS 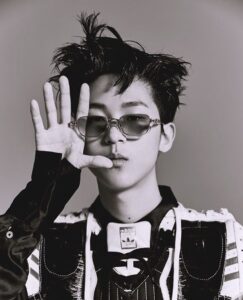 Big Naughty (Seo Dong Hyun) from H1gher Music is a 2003 born soloist with a soothing voice perfect for the sensible rap that he is known for. His vocals does not limit him to rapping as he sings well too and recently he released his latest contemporary R & B Genre, EP “Bucket List”. In his EP, he has shown a different side of his music taste from that he is usually known for. Read on to read our review.