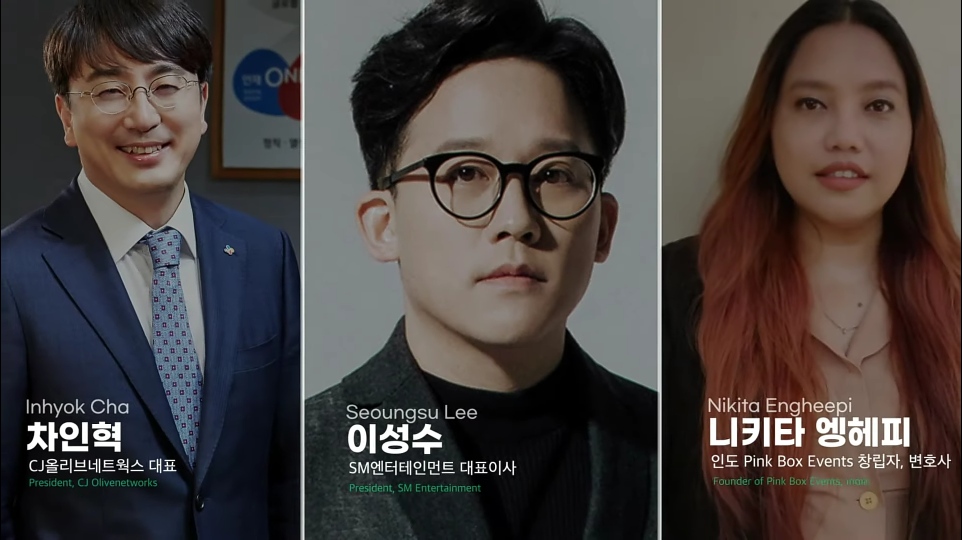 Industry experts come together to talk K-POP and the growth of Korean culture in the music field in this age of technology. Nikita, CEO of Pink Box Entertainment & Co-Founder of Namaste Hallyu will be joining the panel from India. 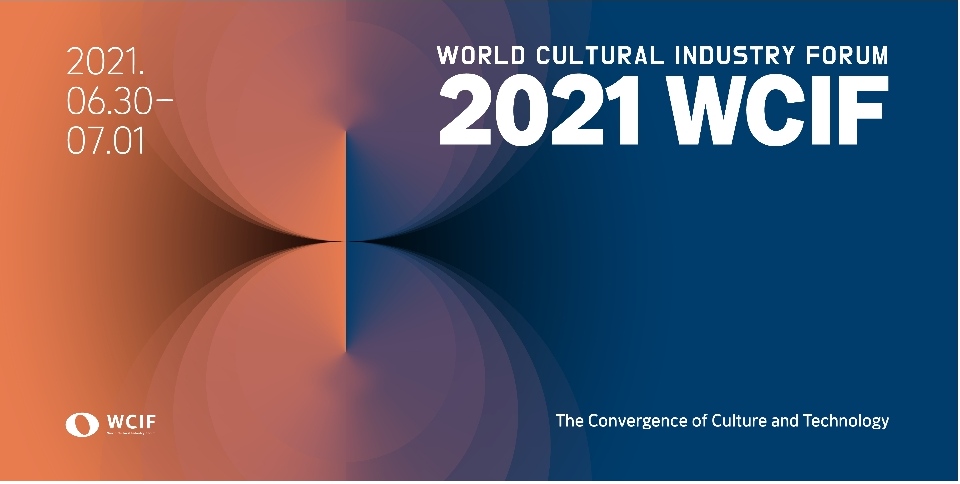 The trailer for WCIF 2021 was recently released along with the list of the speakers and topics and this year, AESPA will be performing. In last years edition, SUPER M had participated and performed. It was at this same conference last year, that AESPA’s concept was revealed and what a win for the rookie girl group that is taking over the world.

It is also a win for Indian fans as Nikita Engheepi, the CEO of Pink Box Entertainment and Namaste Hallyu has also been invited to speak on this platform, alongside various popular industry experts like CEO of SM Entertainment, CEO of CJ Olivenetworks and more! This is a moment of pride for Team NH and Pink Box, and we are so happy that culture/fandom of K-POP in India is being represented on such a huge space and rightly so.  Pink Box is after all India’s oldest event company that organises K-POP concerts all over India and have worked with many K-POP artists including KARD.

WCIF that stands for World Cultural Industry Forum, is an organization that aims to construct a ‘world of culture,’ and further serve as an agora to exchange views and confabulate on the economic growth on an intercontinental level, driven by culture. According to WCIF,  “The music and entertainment industry, in particular, has played a significant role in facilitating international interactions, and the need for cooperation between companies and experts in the sector are still high.”

WCIF was launched in 2019 and it is based on the Korean Cultural Industry Forum that commenced in 2002. On this space, many international producers, companies, and experts connect to create a better Music and Entertainment industry beyond border and support corporations between global cities focusing on the development of music i.e. convergence of Korean culture and advanced technology in the field of K-POP. In last years edition – Rob Light (Creative Artists Agency), Steve Barnett (Capital Music Group), Mark Lippert (Youtube Asia Pacific Policy Chief) had participated along with many other industry experts. Baekhyun (EXO/SuperM), Johnny (NCT) and Boa were also part of the panel as artists.

The 2nd WCIF of 2021, “The Convergence of Culture and Technology,” aims to prospect the changes we face and build stronger partnerships in the music and entertainment industry among content creators, producers, and distributors. Its goal is to contribute to global cooperation in the entertainment industry in the post-pandemic era. 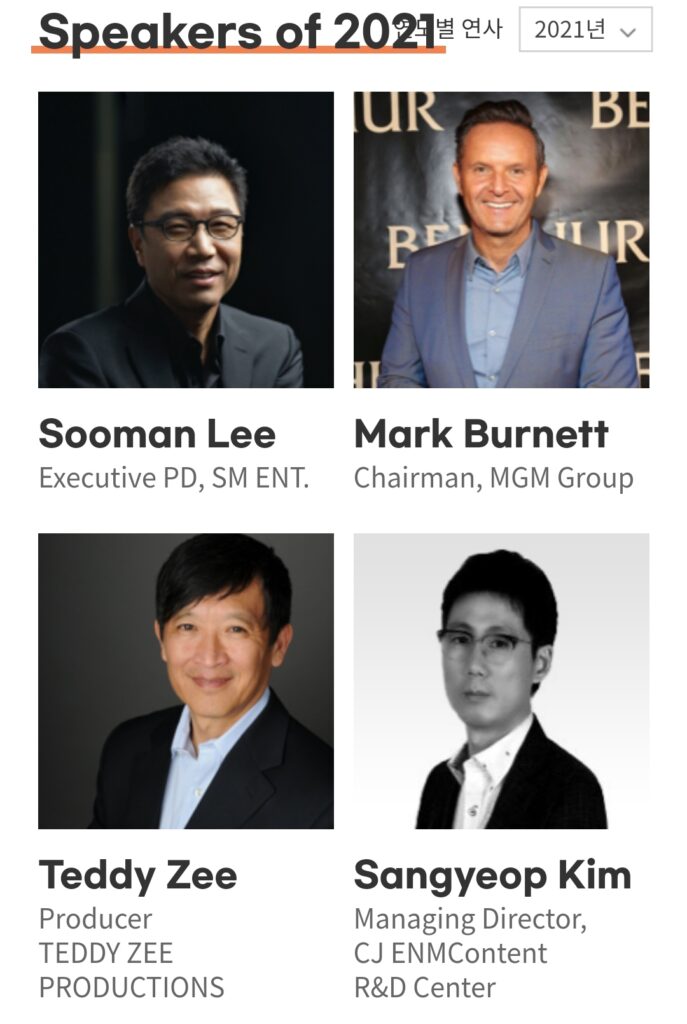 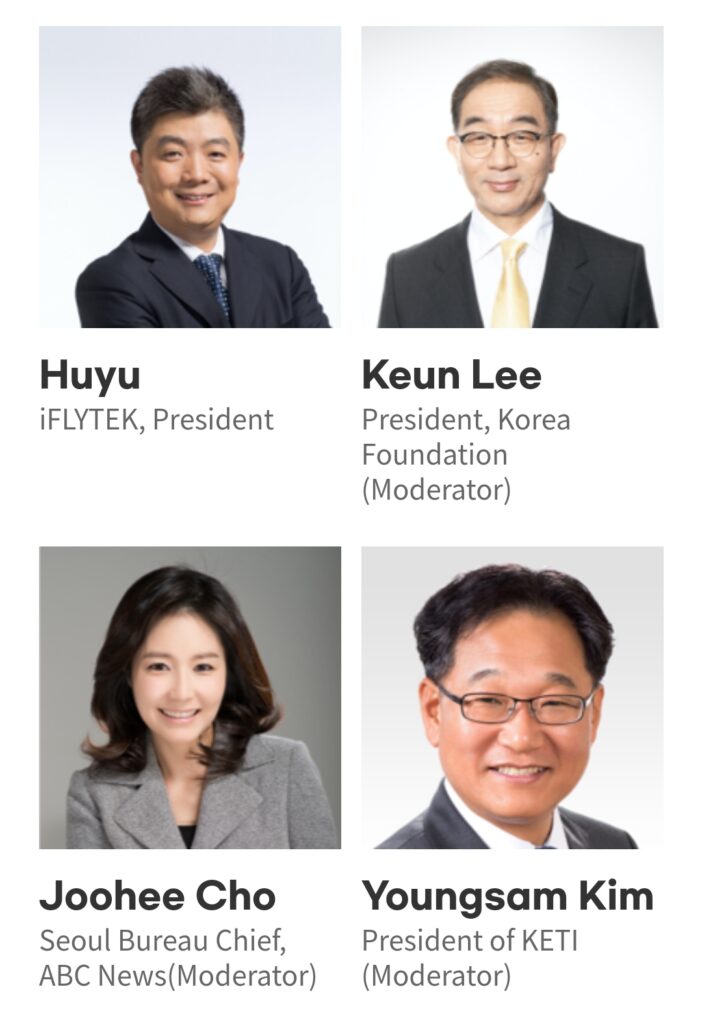 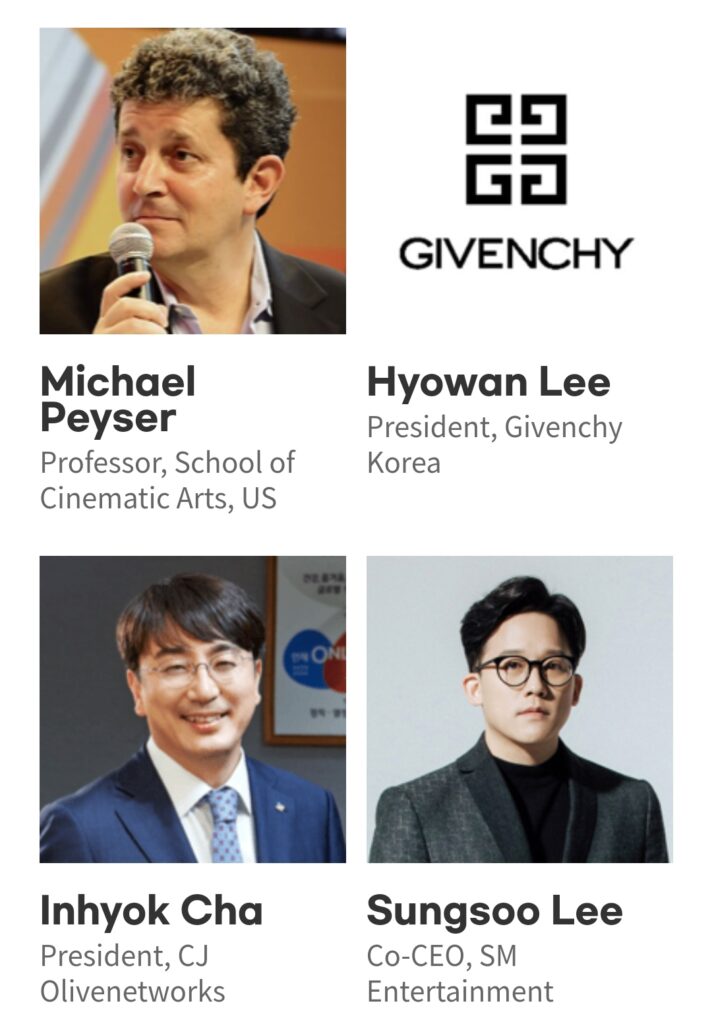 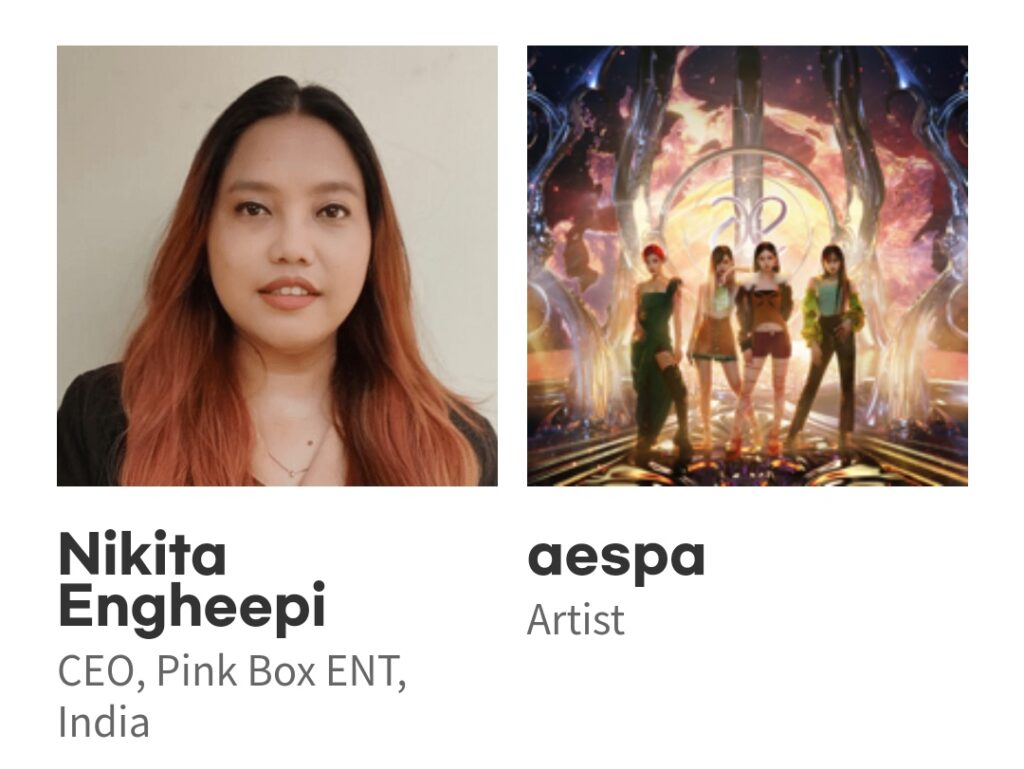 The program is divided into three sessions.

“Changes in Music and Entertainment industry after COVID-19,” there are three keynote speeches and a panel discussion. The first keynote speaker is the K-pop pioneer, executive producer of the culture industry’s leading firm, SM entertainment, Sooman Lee. The second is chairman Mark Burnett of MGM group. He is the producer of America’s famous audition programs like ‘the voice’ and ‘survivor.’ The last is Teddy zee. He is a renowned Hollywood producer with more than 30 years of working experience. Next, in Korea Foundation special talks to celebrate its 30th anniversary, president Keun Lee of KF participates as the moderator.

“Business opportunities following the convergence of 4th industrial revolution and culture.” It starts with a special segment led by Korea’s representative culture firm, CJ ENM’s managing director, Sangyeop Kim. And in the panel discussion, Chief Joohee Cho of ABC news Seoul participates as a moderator, and other distinguished guests also join as a panelist. The panelists are Professor Michael Peyser of USC Cinematic Arts, Director Sangyeop Kim of CJ ENM, and President Kelly Lee of Givenchy Korea. Next, the president Huyu of iFLYTEK, a lead firm of AI in all Asia, will address the keynote. In the special talks following this keynote, President Youngsam Kim of Korea Electronics Technology Institute is the moderator, President Inhyok Cha of CJ Olivenetworks, CEO Sungsu Lee of SM Entertainment, and Indian Lawyer Nikita Engheepi are the panelists.

The next is Session 3,

“Entertainment world reshaped by the convergence of culture and technology.”  We have a special performance by ‘black mamba’ and ‘next level’ artist, AESPA, to show the new concert culture enabled by the convergence of the real and virtual world. After the performance, minister Hee Huang of the ministry of culture, tour, and sports will give a celebratory remark, and then discuss production issues related to online performance and surreal content. In the ‘WCIF award,’ award will be given to a figure who showed extensive effort to bind the East and West culture. Lastly, Director Seunghwan Song of the 2018 Pyeongchang Olympics leads the closing ceremony to introduce the following year’s WCIF outlines. It maybe mentioned that last year, BOA won the WCIF award.

K-POP is one of the massively booming fields in the present generation, as it also serves as a medium that bridges the gap between various countries and Korea as one ‘fandom.’ In the recent days K-POP has also showed it’s interest in advanced technology like hologram idols and avatars. While AESPA is a combination of human idols and holograms, new groups like Eternity that is entirely based on AI has begun to emerge.

Though many companies have made use of AI in K-POP, SM Entertainment has been super open and active. On June 29 SM held their online ‘SM Congress 2021,’ where Lee Soo Man, CEO of SM, revealed big plans for NCT, AESPA, and more.

AESPA is no ordinary girl group. They are creating a separate universe called SMCU (SM Culture Universe), and AESPA will be the first to enter. SM has come up with a new genre called CAWMAN which will be illustrated using this new AI universe.

CAWMAN stands for Cartoon, Animation, Webtoon, Motion graphics, Avatar, and Novel. Lee Soo Man further hinted a potential Hollywood film based on this Kwangya universe. Looks like NCT will also soon enter this AI based parallel universe and Mark even teased fans, “We are preparing various contents which will reveal NCT’s concept universe, which has been veiled in mystery until now. So let’s meet in Kwangya soon.” We wonder what kind of a story line the universe will deal with!

‘NCT Hollywood,’ an announcement that was made earlier this year which got fans hyped up all over the globe, was also addressed in this congress. SM Entertainment revealed that they will be partnering with MGM Television in order to host a survival show that recruits more members and trainees for NCT’s sub-unit and NCT Hollywood. The information so far states that 21 contestants will fly to Seoul and experience Korea culture along with authentic training programs curated by SM. Throughout the show, winners will be chosen to debut under NCT Hollywood in the United States. This intends to promote NCT’s international identity. Doyoung (of NCT) revealed that the idols from the existing groups will mentor the trainees. He also revealed that current members of the group will also act as mentors for the contestants and will be guiding them based on their experience.

We thus believe tomorrow’s discussion will be really interesting as there is a possibility that other panelists would throw in their views about the growing technological aspects in K-POP and fans will get a clearer insight about the industry, how things will change and grow during and post pandemic. With Lee Soo Man and MGM Chairman, Mark Brunett being a part of session 1 , it also looks like the NCT fans will get some answers. After all, AESPA’s concept was also announced on ‘WCIF 2020.’

For Indian fans, it would be interesting to watch what Pink Box will be talking about. Considering the fact that SM Entertainment’s Co-CEO is part of the special talks panel, which SM groups will be mentioned? Will it open ways for collaboration? Will we see SM artists finally in India? Considering how SM Entertainment has been a leading force in the Chinese, Japanese as well as the American Market, we hope that the reality of K-POP in India, is at least heard by the Industry experts and insiders. Pink Box in their announcement post had shared that they are happy to be part of the Special talks and playing a small part, but this is a big win for the Korean Wave fans in India.

It is an achievement in itself to be able to share the platform among such high profile guests and we hope that as Indian fans we will all be able to watch and support while cementing the fact that there is definitely a huge number of K-POP fans in India who are eagerly waiting for their favorite groups to come.

The session will begin at 10 AM (KST) which is 6:30 AM (IST) on July 1st. If you’re interested to be a part of the Special Talks Session, where hopefully we will get to hear about prospect of Indian K-POP, it begins at 14:25 PM (KST) which is 10:55 AM (IST). You can click here for the full program. The program will be telecasted on YouTube and will be available in English as well.