by Contributory Writer
in Review, Team_Choice_K_Music
1 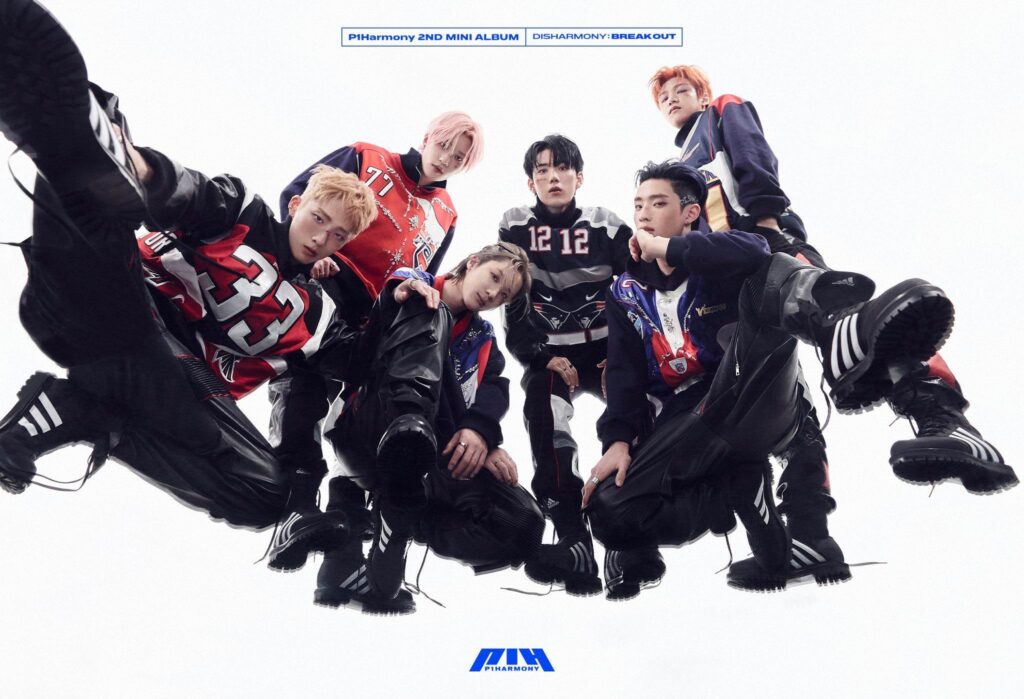 FNC Entertainment’s youngest group,  P1HARMONY is back with their most awaited comeback with “Scared” as the title track. Read on for the Album Review of their second EP, DISHARMONY:BREAKOUT.

The second EP DISHARMONY: BREAKOUT marks the first comeback of the sextet and a continuity of the DISHARMONY series. With six individual tracks in the album, the group persists in making a difference. After a powerful debut, P1Harmony kept on engaging their fans with multiple contents and even had a chance to show off their diverse colours with their collaboration with DAZED Magazine and dance covers with 1TheK. With the new release, P1Harmony once again declare what they are made of.

‘겁나니 (Scared)’ is fierce and stronger unlike any other tracks from the group. The song is ambitious since the beginning with intense beats and riffs that doesn’t let the listeners rest in any part. The explosive tune might not be everyone’s favourite but as the song unravels, the listeners get to enjoy the surprising shifts and bridges. With a quick prelude,  the song starts off with a rap influenced verse. “Ya, don’t listen to their feedback. Why do you sit still, listening to them?” begins Intak along with Jeongsob in a daring tone.

When the listeners get settled with raspy verses, the vocal duo, Keeho and Theo take over to bridge the chorus with their powerful vocals. It is indeed safe to say that the shift of genre in the pre-chorus was rather a surprise to the listeners. The vocals don’t just blend in but stands out distinctly throughout the song. After being led by the vocalists, the beat drops to reveal the most expected chorus. “What are you scared of?” questions Jiung while leading the chorus that sounds more like a chant to evoke the fighters’ spirit in every individual.

The second verse is dominated by the mellow verses of Jiung, Keeho, and Theo, to soothe the wounds and scars with hope and courage. As the song continues, the listeners get to feel the hatred of being curbed by the oppressors to be eased with the gritty track. The climax is beautifully driven by Jiung’s soothing lines, “Hey, you stop thinking like that, Believe in yourself. Why do you take yourself down?” followed by a solid instrumental piece for Soul to score with his solo performance. The members finally get together to repeat their chorus in a more hyped manner as a finale.

The meaningful lyrics of the song is all about fortitude. The act of six being known for carrying thoughtful messages once again deliver a powerful message of fearlessness. “Will anyone want me? Stop worrying about that. Just go, go, go,” sings Keeho, addressing one of the common issues found prevailing among adolescence – the fear of being rejected. Ultimately, the songs can be ranked as one of the must listen tracks to boost your spirits.

The music video continues with the storyline of the previous single ‘SIREN’,  as the members lead a clan of commoners to stand out. The  video is realistic in portraying the resilient members and the rest of the rebels. The city is almost evacuated leaving behind a few who feel as outcast from the rest of the world. Their routine looks monotonous and restricted as they are bound to listen to strange announcements and stay isolated. The shot then shifts to an underground basement where the members assemble together to lead the clan. With both monochrome and colour visuals and the tough shades of the members are well portrayed in the music video. 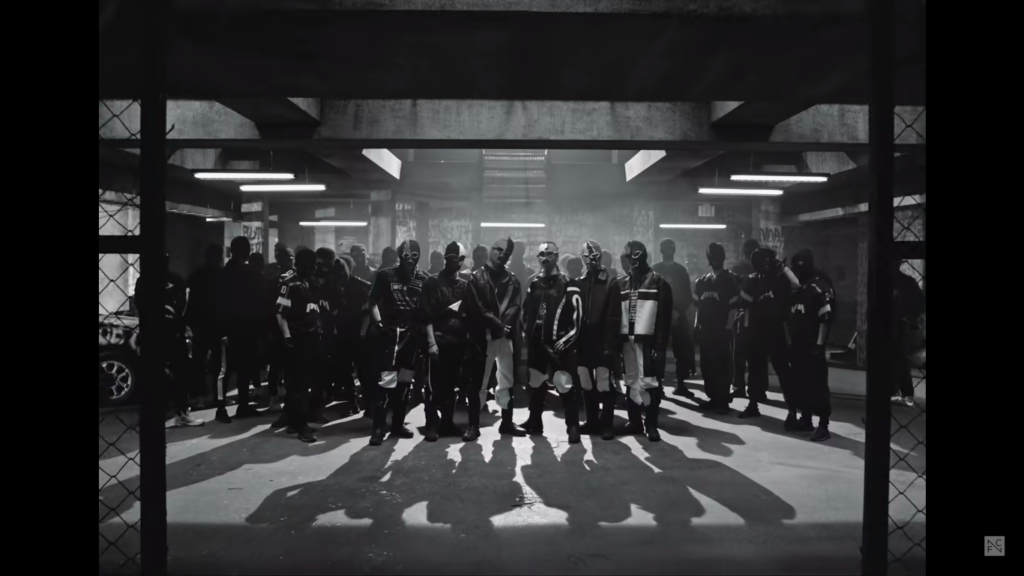 Adding to the solid storyline, the music video focuses on the group’s intense choreography. With heavy moves and strong facial expression, the members express their toughness and determination through their power packed dance moves. The music video on the whole captures a mature side of the members and intends in bringing a visual representation of the message conveyed in the album. 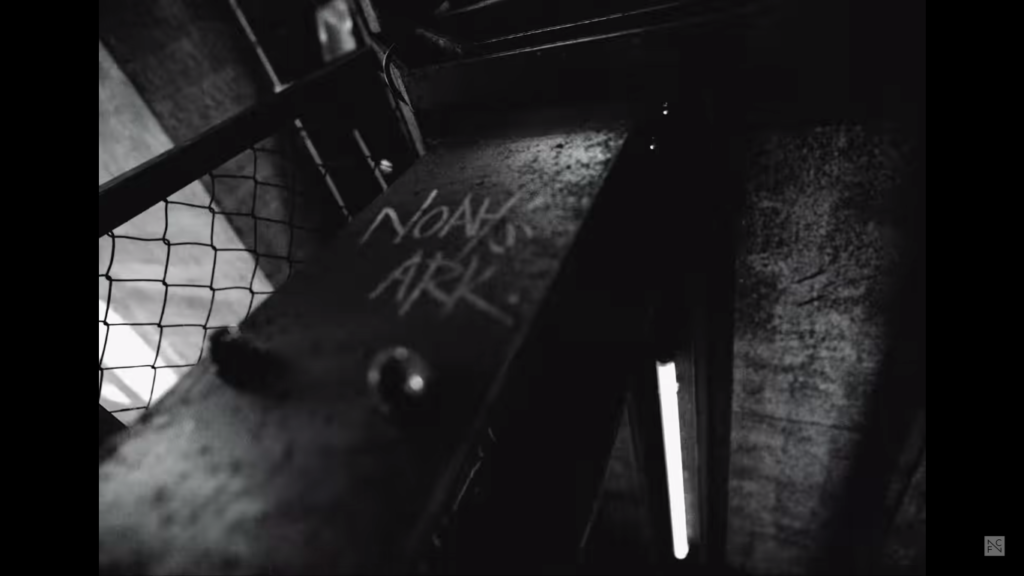 The basement that is used as a hub by the members has the words, “will come to you to be kept alive ” written on one of the walls and “Noah’s Ark” on another. The theories take the reference from the biblical story of Noah in the book of Genesis. Noah, one of God’s believers, was ordered to build a huge ark to save himself and his family from a world-engulfing flood. The flood was a result of God’s anger against the sinners. Noah’s Ark withstood the flood and saved his family from the disaster.

By mentioning “Noah’s Ark” it can be considered that the underground basement is a place to retreat and be safe during the battle. The members act as ‘Noah’, in being a leader and bringing together the people around the world to keep them safe and alive under the same roof. Though the ark seems to be floating on the endless waters, waiting for the flood to end, it signifies affirmation and loyalty. Similarly, the members find themselves in an uncertain situation but still stand strong against the odds.

During the group’s performance, the viewer gets to see the billboard that reads the Olympic’s motto, “Citius, Altius, Fortius” which means “Faster, Higher, Stronger”. The Latin motto in this context indicates the group’s breakout in the contemporary world. 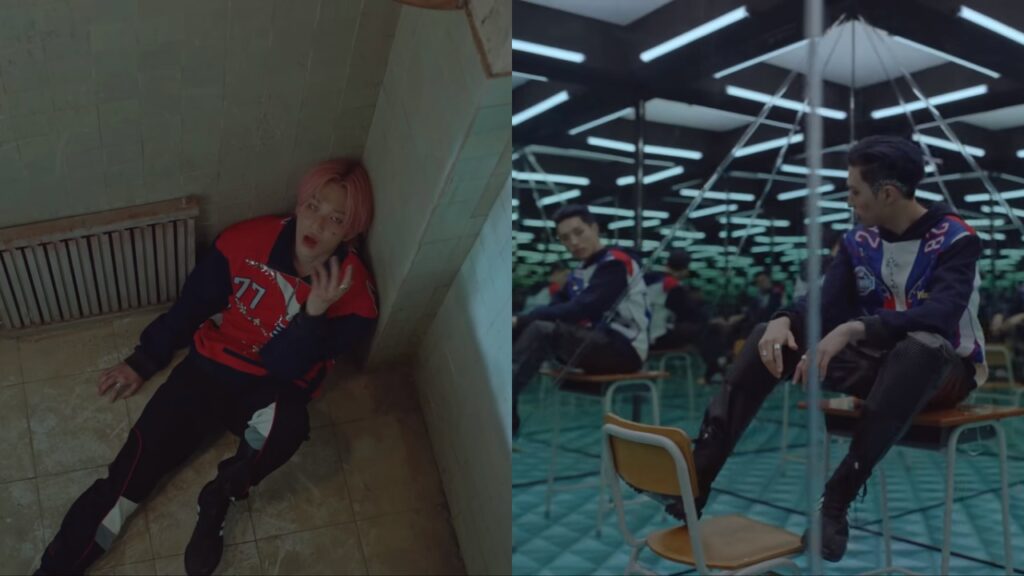 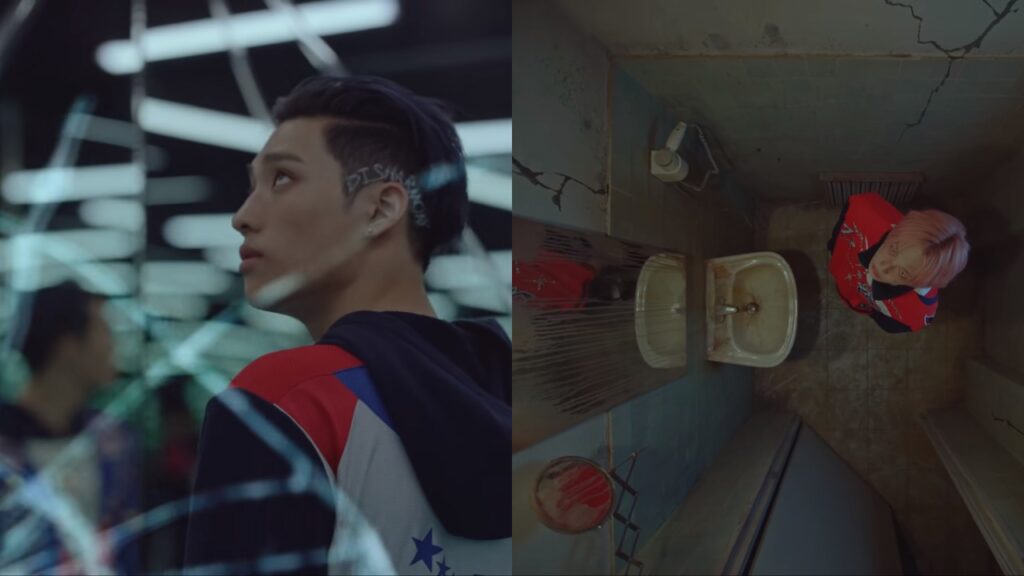 Taking the fight to the next phase, the members break free from the compromising prison. 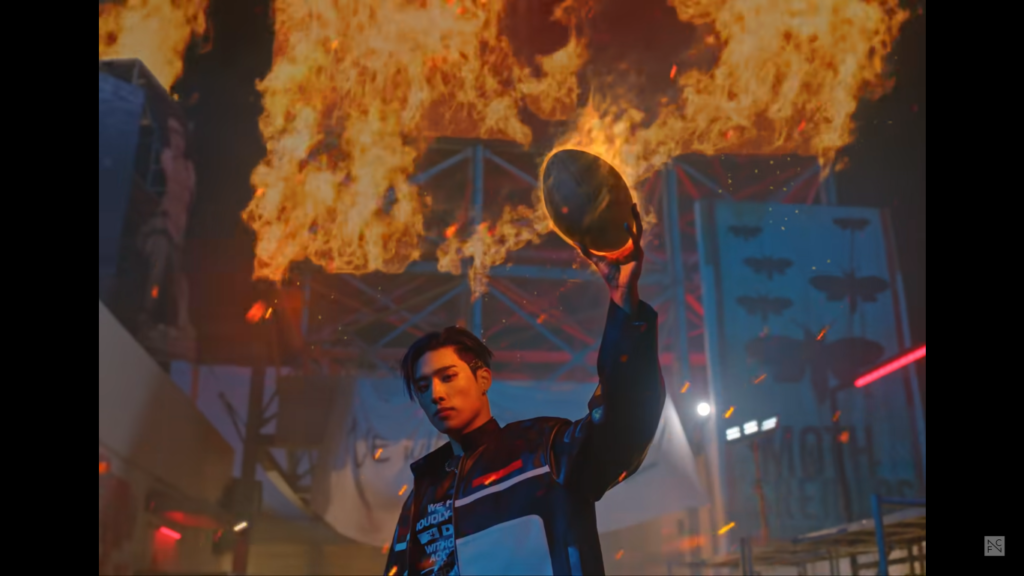 The group dressed in their sports gear also use a football as a prop in the choreography to let the opposite party know that they won’t withstand anymore and will attack to get what they deserve. 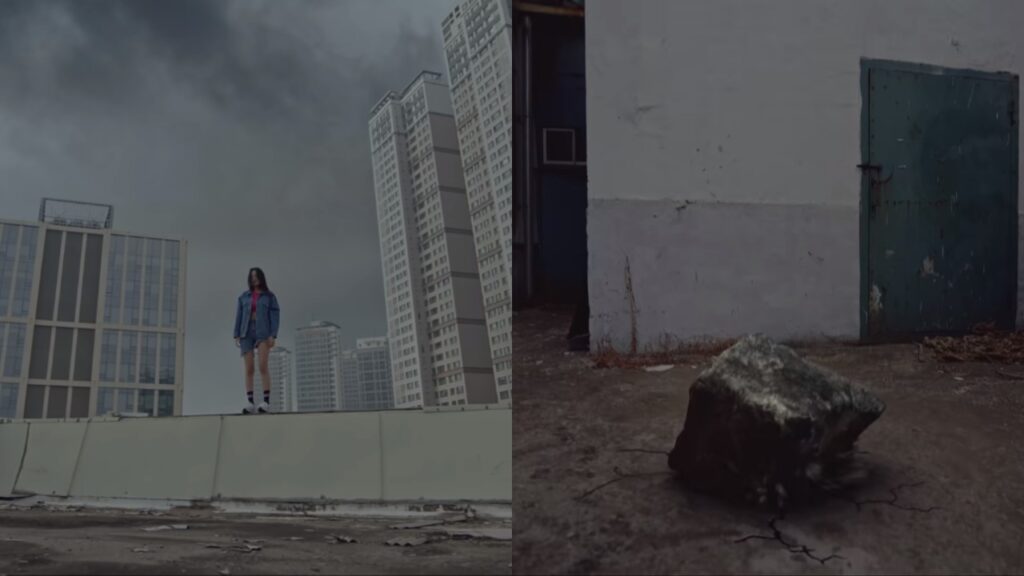 The video then captures the teenagers often seen on the verge of falling down from buildings which might denote the act of standing on the edge and thinking of self harm. But, instead, huge rocks fall and crack up the floor. As the rocks hit the ground, the glass cube and the walls crack. When the individuals were pushed to an extent to give up, they turned into rocks instead and hit hard to crack open the earth. The video concludes with the words, “Rain leaked through the cracks of the world when the brave children crashed into it. Rain continuously poured as the dirt had to be washed out.” The lines refer back to the story of Noah, as the flood was caused by continuous rain to wipe away the sinners and their sins from the world. In the end, the members are seen dancing in the rain with “Hope” written on one of the billboards when all the others are burnt out – marking a new beginning with hope. 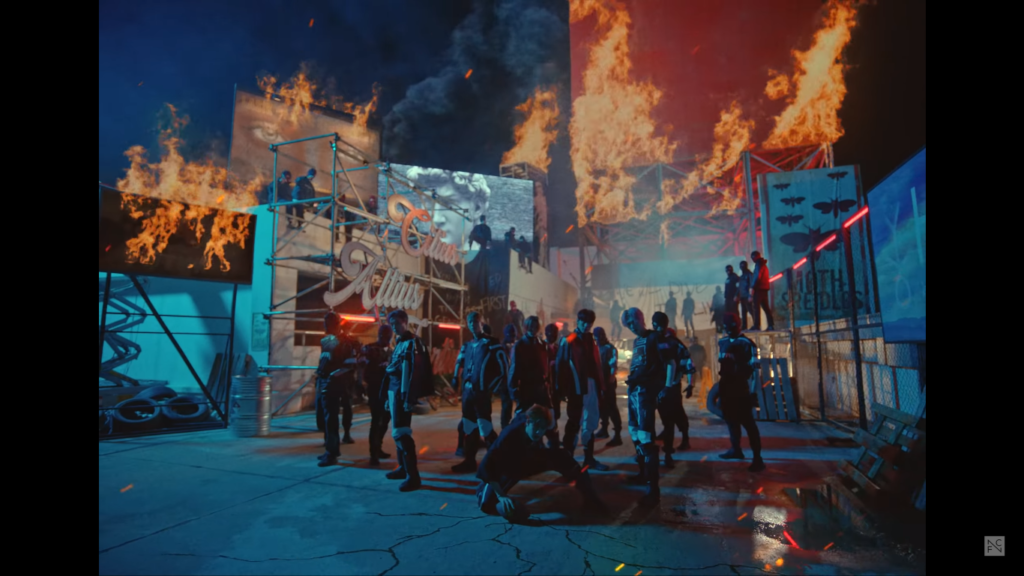 The second song in the album, ‘Reset’ is a hip-hop track that is as strong as the title. The track continues with the same energy and heavy beats, staying as another powerful anthem in the album. The B-side is promoted as the second track and has already gained high regards among the fans. “Reset the motherboard. Reset, write again from the beginning,” begins Jiung as the track insists the importance of starting again. It is never easy to start over and needs a lot of courage to do it.  “It’s nonsense, I can’t do it. That’s devil’s whisper oh, I believe I can do it right,”  sings Soul and Theo, as P1Harmony insists on trusting yourself. The song is indeed a must listen to revive your confidence.

‘Pyramid’ is a self declaration track. “I am on the top of the pyramid,” declares the members in the beginning and keeps reminding the listeners during the repetitive chorus. The song’s lyrics insist on breaking down the limitations and the constraining pyramid as the members sing, “We’re here to break the chains. Tear down the walls of the Pyramid”. Though the song initially sounds like a self boasting track, the verses like, “Even if I’m afraid, I’ll be stronger” and “Only the endless battle is being repeated. I wanna bloom in my exhausting life yeah,” encourage the listeners to trust in themselves and step out of the ordinary.

‘AYAYA’ co-written by J.DON of N.Flying is a song that anybody can vibe with. The song brings a mild shift in the album as comparatively, the track takes it slow by emphasising more on the members’ vocals. Despite being a vocal dominant track, Intak and Jeongsob get their time to stand out with some rap verses. ‘AYAYA’ is reminiscent of one of their previous B-Sides, ‘Butterfly’ because of its identical intro tagline, “Come in” and the tone of the lyrics. Both the songs’ lyrics revolve around self reflection and breaking free from the restrictions. The members contemplate the concept of indifferences and encourage themselves to fly high. The repetitive chorus, “AYAYAYA” is indeed a catch to keep the song addictive in the playlist.

‘End it’ continues to explore with hip-hop sounds and blasts as an hard hitting anthem in the album. The song’s lyrics instill the idea of demolishing the hypocritic beliefs of the world and being a change. The members head start with rap dominant verses and delight the listeners and let the vocalists outdo in the pre-chorus and chorus. Adding to the strength of the vocalists, the passionate lyrics, “Tonight we going, I won’t be scared, To the unknown, To win, Pour out all my power, The light that breaks the darkness comes alive” in the pre-chorus, rejuvenates the listeners every time.

The album wraps with the soft and mellow tune of ‘If You Call Me’. The R&B track written by the members exhibits the vocal strength of the act irrespective of their positions. “You’re in the middle of a bottomless flood, I know you think it’s filled. That leaking water fills our hearts. It’s a beautiful blue sea,” goes the verse bringing in the reference of the biblical story of Noah. When Noah decided to build his ark before the flood, he was mocked by commoners and was called a fool for building such a huge vessel. Yet, he stood strong in his faith. The members now take up the same stand against the selfish world and want the listeners to choose a destiny with them.

DISHARMONY: BREAKOUT was one of the most anticipated comebacks of 2021 and despite the pressure, the act undoubtedly scored high with their new release. The music video of ‘Scared’ recorded 5 million views in just a week which is indeed a huge achievement for the rookie group.

With the new EP, the group explores more with a particular genre and takes a command over hip-hop sounds. Surprisingly, the playlist of upbeat songs still succeed in showcasing the strong vocals of the group. Besides being artists, the members try to carry out strong messages in every album which makes the audience more curious about what is next.

Did you enjoy P1Harmony’s Comeback? If yes, let us know your favourite tracks from the album!