by Contributor
in K-POP, Review
7 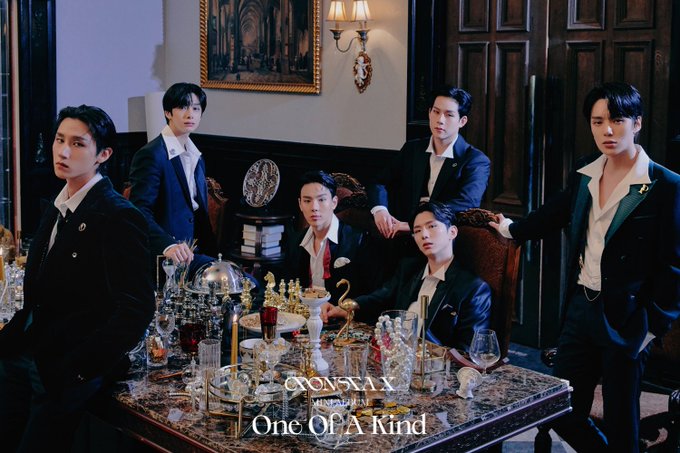 The global K-POP group, MONSTA X sets the stage for another unforgettable era with its ninth mini album, One Of A Kind.

The group has been the epitome of power through the years and stands out in the international radar with their distinct discography inclusive of the release of the full English album, All About Luv in 2020. With their latest title track ‘GAMBLER,’ the members give a classy touch.

The EP consists of six new tracks including the single and the remake of Japanese song, ‘Livin’ It Up (Korean Version).’

‘GAMBLER’ is another successful hit single for the group and a jewel to the crown. With strong bass sound, guitar riffs and synths, the song itself is grand. Composed by the members, Joohoney and I.M, the song continues with the signature tone of the act and infuses rock beats to appeal to fans with a different touch. The song begins with Joohoney asserting, “If you don’t know, now you know. Okay? Deal!” which sounds apt for both the title and the group itself. Minhyuk and Hyungwon with their low raspy vocals grace the first verse, grabbing the listeners’ attention instantly. During I.M’s intriguing lines, the listeners get to notice the clear-cut guitar riffs which is an attractive feature and is irresistible throughout the track. The vocalists, Shownu, Kihyun and Minhyuk lead the second half of the verse and hype us for the upcoming catchy chorus. As solid as ever, the chorus is laid strong with dominant instrumentals and deep vocals of I.M and Hyungwon. By this time, the track is already irresistible to our ears.

The banger maintains the hype after the chorus with Joohoneys’ fierce verse continued by I.M’s chic lines which once again highlights the classy aura of the rapper duo. Without further delay, we get to the finale with a 30 seconds dance break. Following the instrumentation, Joohoney surprises the listeners with an unexpected sharp high note which opens up to the actual climax of the song. The vocalists, Kihyun and Minhyuk’s bridge and roof hitting vocals give a dramatic closure to the track. Whether it’s the sharp vocals or the raspy rap verses, the sextet delivers it with class.

The lyrics are as fancy as the single. The penned lines portray the attraction and tension between two individuals as the members are induced to bet everything at one glance. “Me? I’m a handsome sum of money/ I got a vesper martini, hooh/The c-note or dinero overflowing in my pocket” raps Joohoney, as the members show off their riches in their attitude. The members’ passion is put to the test as they are caught up in a losing battle. “A trap on top of the bright red lip that caught me/ Hang my heart (woah)/ Even if I lost everything for a moment/ This heart caught in a trap killin’ me now,” goes the lyrics as the members themselves come forward to bet everything. The whole game of love is unpredictable and nobody can be the winner or loser forever as Joohoney metaphorically relates love with gamble, “You don’t know how to take me yet/ ‘Cause love is a gamble.”

The music video is all about opulence and style. With flashy lights, luxurious settings and a solid story plot, it surpasses every aspect of excellence. Inspired by the themes of James Bond and 007, the members play the role of professional con artists. 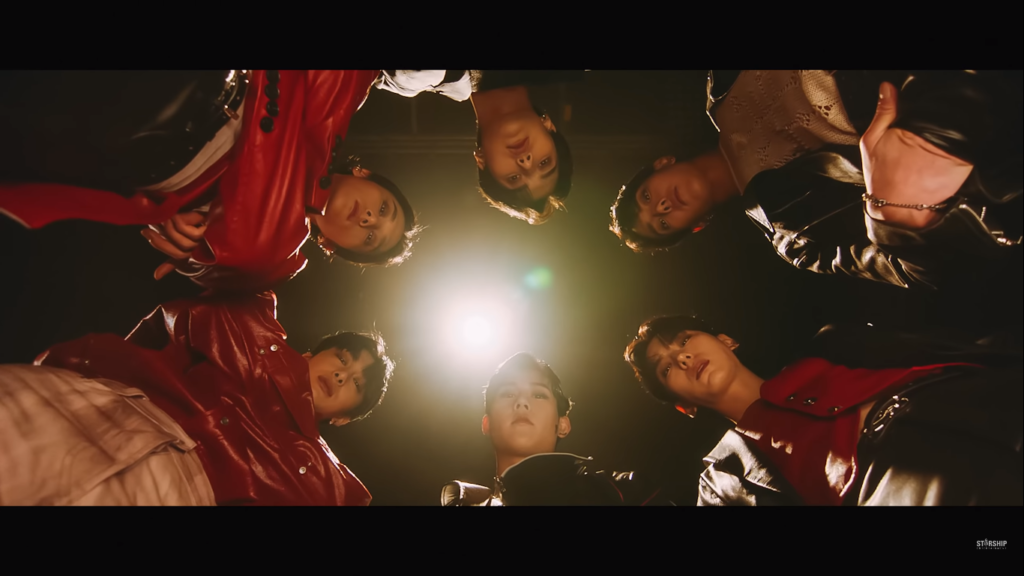 The team of six draft a perfect plan to steal a “Red Crystal” that is to be on sale in a secret auction. The members are initially in their fancy leather jackets while plotting their heist, as they carefully sneak into a hotel and spy on individuals who are to attend the auction. To execute the plan as discussed, every member should be shrewd and most of all, there should be excellent team work, and so, in different shots, we find the members take up different responsibilities. 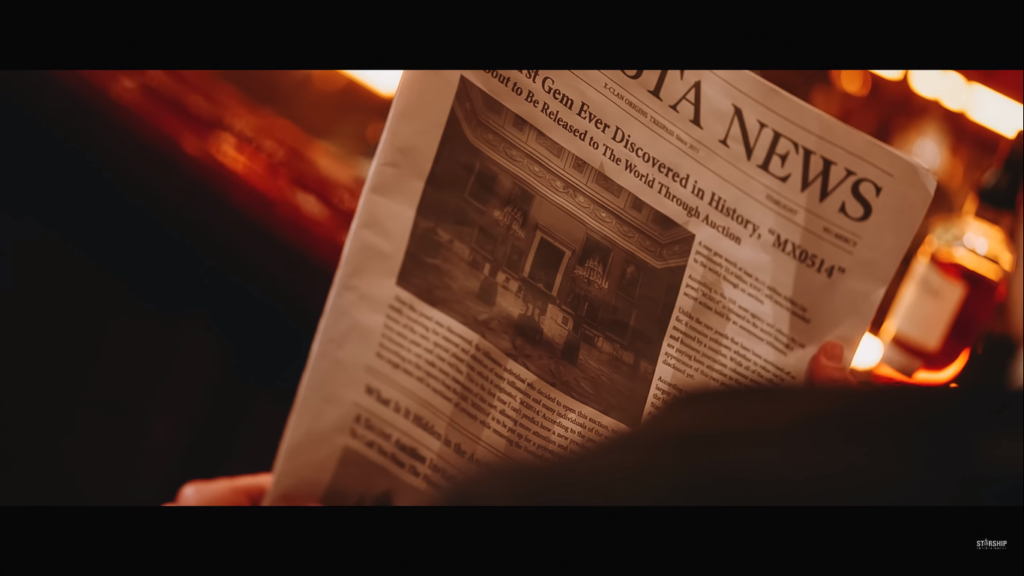 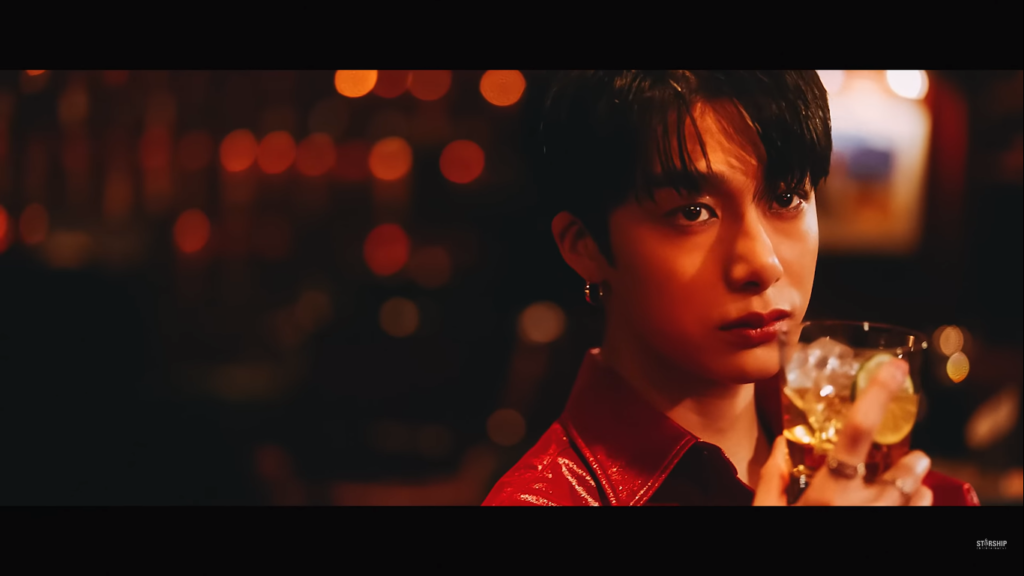 I.M works with the blueprint of the hotel and prepares a device to disable electricity, Kihyun sets the device when others steal the invites for the secret auction. Later, we find the group’s members switched in the places of the original buyers adorned formal suits. 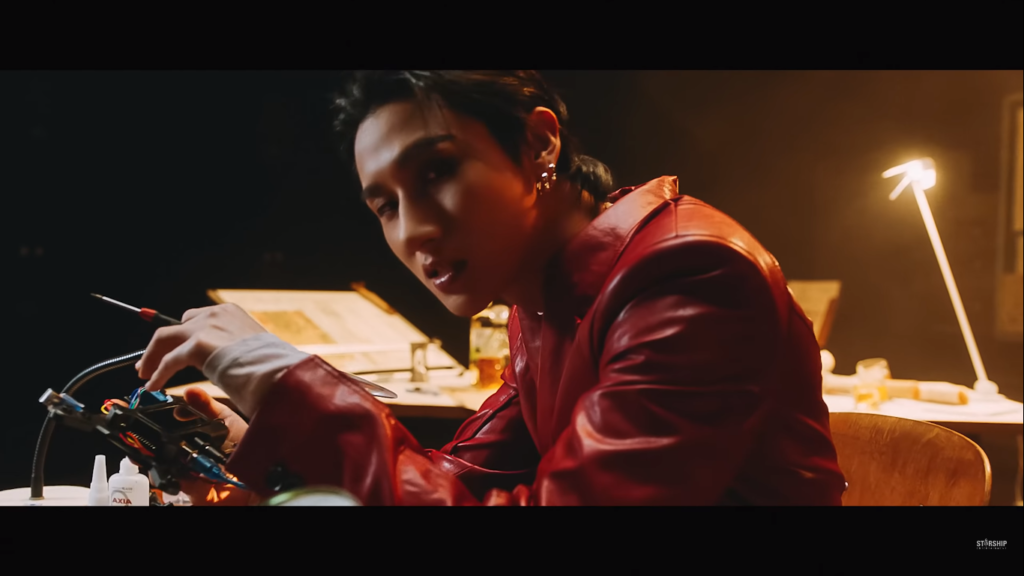 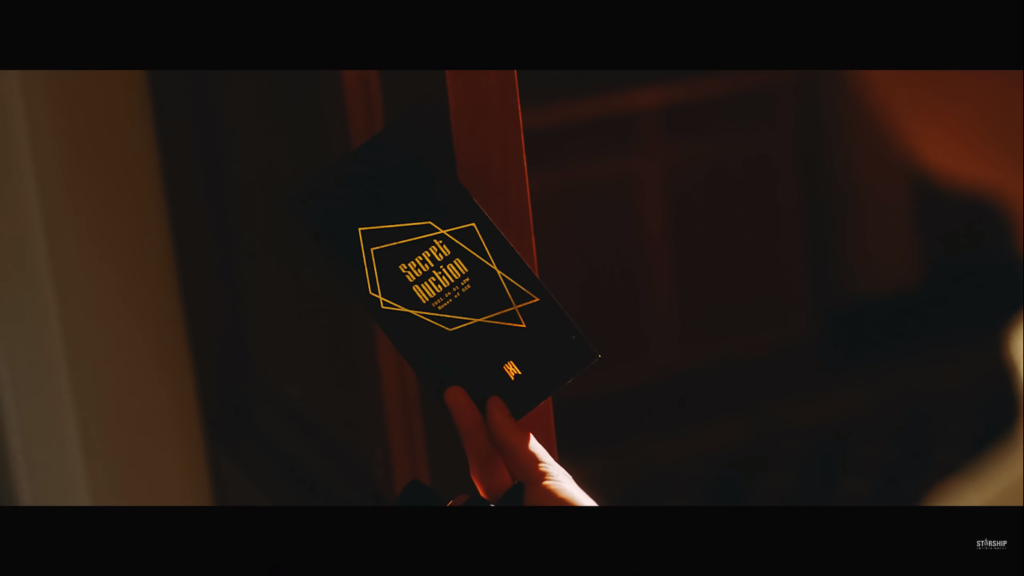 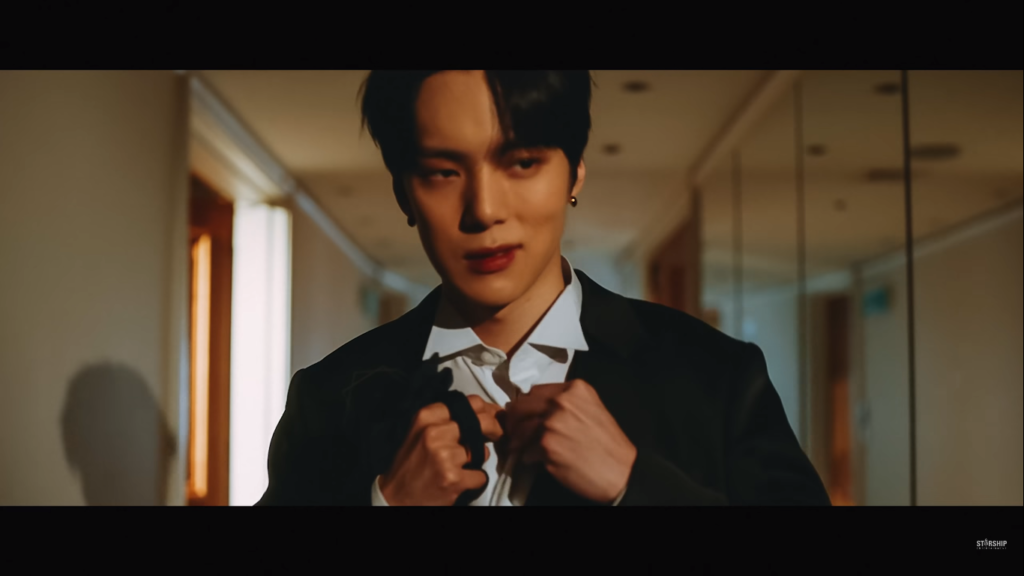 As expected, the members pretend to bet on the crystal against a man in his white suit and when the right time comes, Kihyun and Minhyuk decide to stage a fight as planned. The lights shut off and within seconds we find the buyer in white suit knocked off and the members are gone missing. The shot shifts to the next scene where the members are found in black uniforms. The story closes with the members accomplishing the task and leaving in their SWAT vehicles. 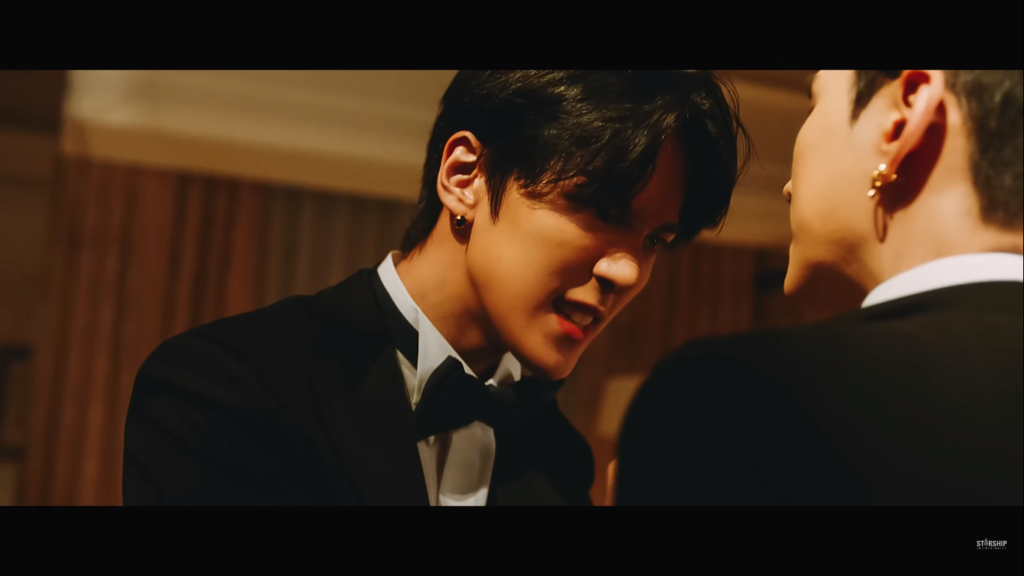 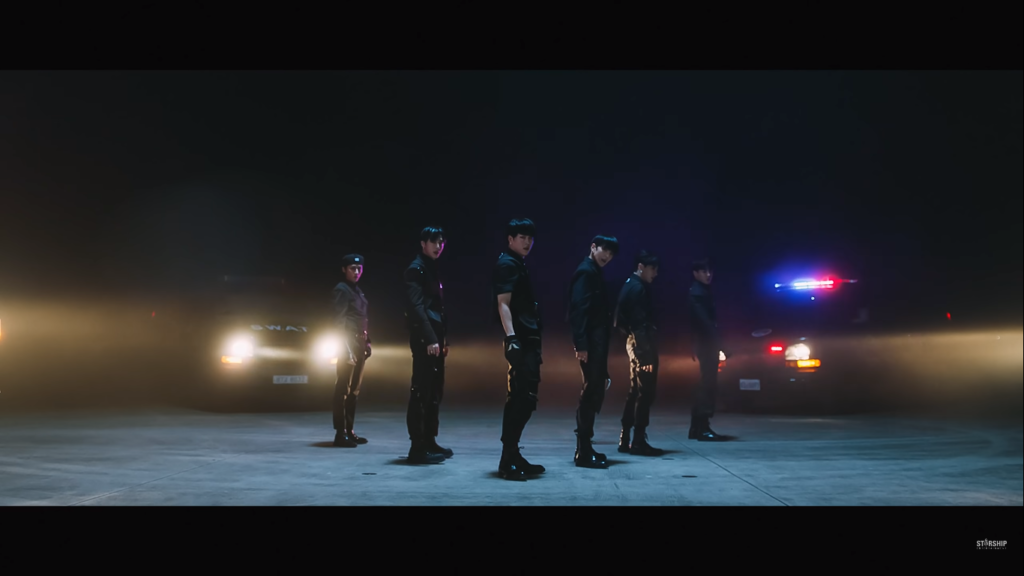 The unexpected end leaves the fans to decide if the members were police officers on a secret mission or actual con artists behind their uniforms.

Are the members S.W.A.T in charge of a secret mission or are they con artists behind their uniforms? It is left to the viewers to decide. 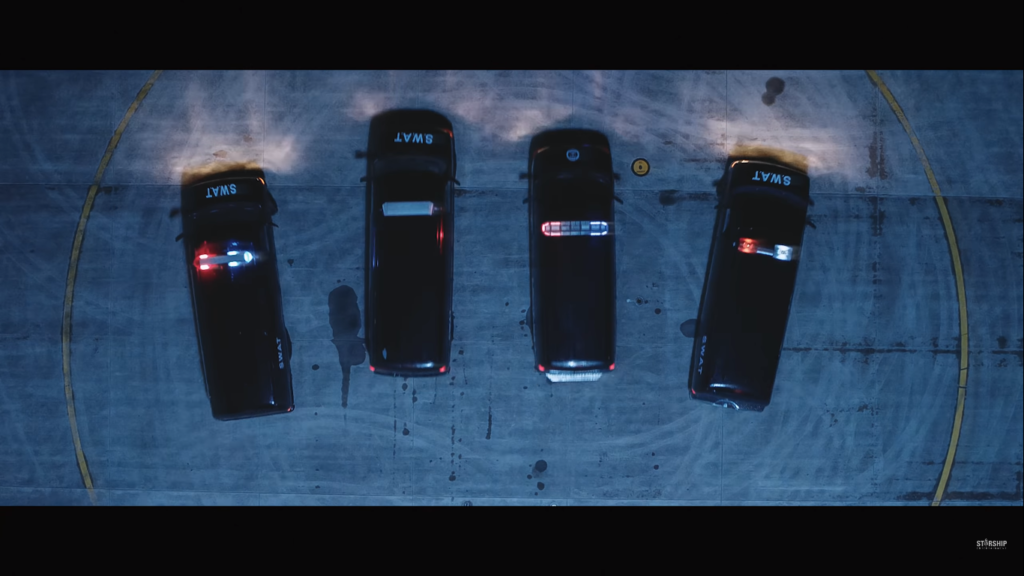 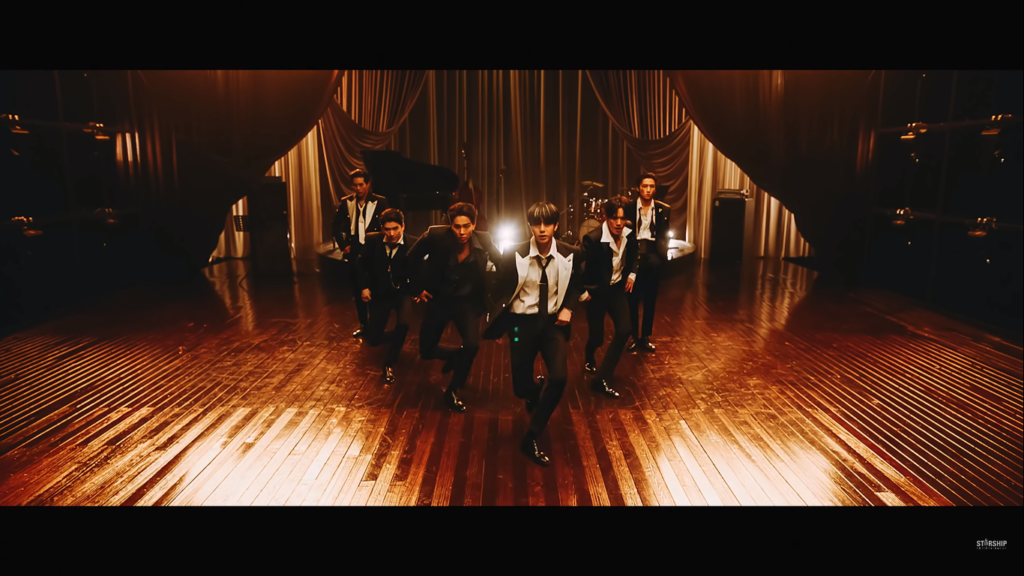 Adding to the intriguing plot, the cinematography plays a great role in ceasing our attention throughout the music video. The detailing in stunning visuals and stellar looks on the other hand enrich the visual experience, making it irresistible for a replay. As for the choreography, the members make sure to keep the moves intense and on point. The music video makes sure to highlight the members’ expressive moves and sleek gestures which make the choreography more attractive to look at. On the whole, the music video is a perfect feast to gratify any viewer’s expectations.

The second track in the album, ‘Heaven’ brings a summery vibe. The mellow pop track is undoubtedly a romantic song and is a perfect pick in your road trip playlist. With pleasant instrumentals and honeyed vocals of the members, the lyrics sing about a blissful journey or an ideal date with a loved one. The lyrics of the song are indeed enduring with detailed description and inclusion of foreign phrases as “Bon Voyage” and “quiero estar contigo” in the verses. “Woo maybe this is heaven/ Wherever I am with you,” sings Kihyun when the chorus goes, “Ride the clouds drive (everywhere)/ Feeling fly now (oh yeah)/ Endless ride (ride)/ Step on the accelerator harder/ Slide over the clouds (da-da-da-la-da)/ I feel high right now (alright),” giving us a dreamy experience during the listen.

‘Addicted’ pops up next to make our hearts throb with dark and obsessive love. The tension and passion can be felt through the track with its intense instrumentation and low vocals of the members. The lyrics contemplate the theme of an addictive love from which the members try to escape. But, they only end up voluntarily submitting themselves as I.M sings, “A feeling of suffocation/ I know it sounds strange/ But I’m lovin’ this”. The melodious chorus, rap verses, the bridging in the end and the final harmonization together enrich the listening experience.

If you are a person in love with 90s vibe, then ‘Secrets’ is a perfect fit in your playlist. The full English track composed by Hyungwon is a romantic RnB and is already one of the most favourite b-sides among fans. The lyrics written by Hyungwon, Joohoney and I.M express the hazy state of the protagonist while trying to understand the other person’s intentions. “Wish I could read your mind (I do)/ Don’t wanna waste this time (it’s true)/ Tell me what’s behind those eyes? (Yeah you),” sings Minhyuk as the members are caught up waiting in the game of tease. Though the lover does not give an answer, it is visible that there are secrets beyond those eyes. With mild drum beats and mellow vocals of the members, the song is an aesthetic listen.

Hyungwon contributes another soothing track to the album with ‘Bebe’, which is a homage to the fans as the members share a heartfelt message and reminisce about their journey through the years. As the members mentioned previously in interviews, the lyrics emphasize on the importance of MONBEBE in the lives of the members. “Monday, Tuesday, Wednesday/ Thursday, Friday, Saturday/ And Sunday here always/ 24/7, I love you, BEBE,” sings the members while dearly calling out to their most beloved fans. Lines as, “After walking all day, I think of you for a moment/ Then put a bright smile on your face again/ Saying I was there in your time and I again/ You knock on the past memories,” affect us as fans and makes us look back at the beautiful path we walked together with the group. Adding to the soothing lyrics, the members please us with their honeyed vocals which makes the song even more enduring.

Known for his sensual lyrics writing, I.M once again gifts his fans with another alluring track. ‘Rotate’ sets the mood for a passionate love with synths and husky vocals. “Only emptiness fills this space/ My patience has escaped/ You and I, we are ready,” goes the pre-chorus as the members confess their desire to their loved one. The instrumentation and members’ vocalization blend perfectly to beautify the song. On a high note, Kihyun’s vocals during the chorus and Hyungwon’s coarse lines fit the best for the mood and stand out the most in the song. Ultimately, the track ends up in your regular playlist for sure.

The last song in this album is ‘Livin’ It Up (Korean Version)’, which is the Korean remake of the group’s Japanese track released in 2019. With bombastic beats and synths, the song roars in your playlist. The song is a perfect way to end the album as the song fuels you with passion and energy. As expected from the name of the song, the lyrics sing about partying hard without hesitating. It is usual for people to forget the importance of partying and celebrating the occasion and in the adrenaline-fuelled anthem, the members try to remind listeners of the necessity to “Livin’ It Up”. Abiding to the lyrics, “Livin’ it up, forever dadada/ Let’s party all night, 24/7/ A never-ending dream/ Right now, right now, take it away/ Open the door to your heart, let’s livin’ it up,” and addictive beats, the listeners don’t have other option but jam all day. With no doubt, the song is a must in your daily morning playlist to kick start your day with power.

Staying true to the album’s title, MONSTA X have once again proved to be ‘One of a Kind’ and surpassed people’s expectations with their recent EP. From infusing heavy guitar riffs and trying out 90s vibe, the sextet has showcased love in different colours. Following the release, Kihyun, Minhyuk, Hyungwon, Joohoney and I.M have been surprising us with power-packed performances with different intros every time. Unfortunately, Shownu had to sit out from promotions due to medical issues but he still made sure to support his members by accompanying them. 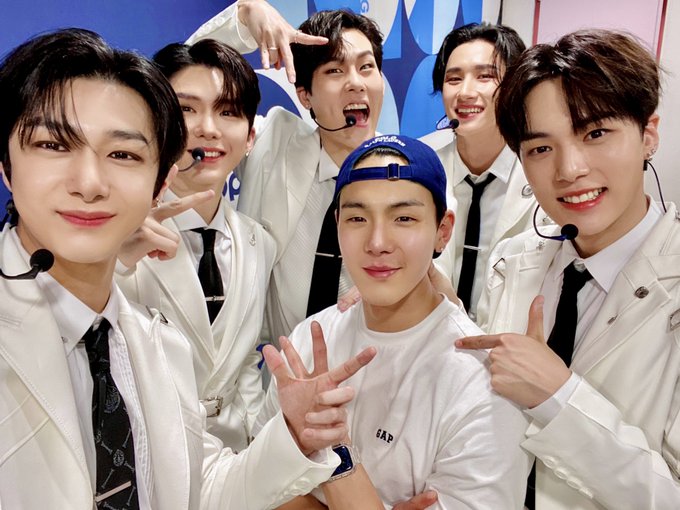 Hopefully he recovers soon and joins the rest to celebrate their efforts and wins for this comeback!

Watch some of our favourite performances below!

Did you get to listen to MONSTA X’s recent album? If yes, let us know your favourite tracks from the album!

Is Park Seo Joon Starring in Captain Marvel 2 'The Marvels'?