TWICE has released their third studio album ‘Formula of Love: O+T = <3’ filled with passion and love.

On November 12, TWICE released their third studio album ‘Formula of Love: O+T = <3’ and the official music video for their title track ‘Scientist’.

Composed by English singer Anne Marie, ‘Scientist’ is a peppy track that goes along with the beautiful vocals and the stunning visuals of the group. The signature coordinated choreography of TWICE for the track is also not to be missed. 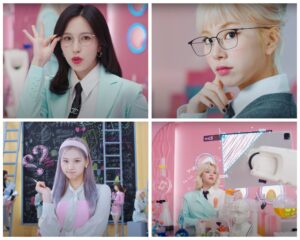 Following the concept, the members seemed to have arrived at a conclusion for their formula for love, which is to follow your heart. The music video is more like proof for their Formula of Love with their catchy chorus “Love ain’t a science, don’t need no license.” 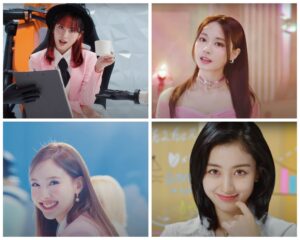 The studio album includes a total of 17 tracks along with the three-unit tracks. ‘Push & Pull’ has a cheeky vibe and is sung by Jihyo, Sana and Dahyun, while ‘Hello’ by Nayeon, Momo and Chaeyoung beautifully showcases their vocal talents. Latin pop-inspired song ‘1, 3, 2’  is performed by Jeongyeon, Mina and Tzuyu.

Each and every member of the group has taken an active part in the creation of the album. Jihyo has written and composed the track ‘CACTUS’, while she wrote the lyrics for ‘Real You.’ Dahyun has participated in the lyric-writing for ‘Cruel’ and Nayeon and Chaeyoung for ‘F.I.L.A (Fall in Love Again)’. Chaeyoung also participated in writing the lyrics for the Korean version of their first full English song ‘The Feels’.

During various interviews, the group repeatedly highlighted that the album is a gift for all their fans, prepared and curated with the love of all the members.

Prior to the release, the album surpassed 700,000 pre-orders breaking the record that had been set by their previous mini-album ‘Taste of Love.’ ‘Scientist’ has garnered more than 16 million views on YouTube and is ranked third in India on iTunes.