October is here, which means shorter days, longer nights, and rapidly approaching winter. It also means that Halloween is lurking right around the corner, and what is better than watching some spooky K-pop MVs to get into the Halloween spirit!

From popular classics to not so well known songs, the curated list includes 5 K-pop MVs filled with haunting imagery! Add these spine-tingling, hair-raising songs to your Halloween playlist and herald the spooky season!

NOTE: If you don’t like gore and blood, there is a clean version of this song. 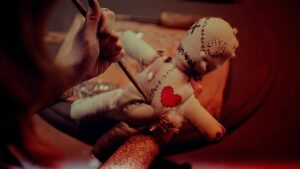 How can we start a list of spooky K-pop MVs without mentioning VIXX? When thinking about Halloween and K-pop, concept idols, VIXX is the first that comes to mind. Almost each of their MVs is just right to put you in the mood for Halloween. However, ‘Voodoo Doll’ is by far their most terrifying one.

As one can guess from the title, the MV features the members controlled by a voodoo doll. The woman puts them through some bone-chilling situations. Along with the plot of the MV, the choreography and music add to the spooky atmosphere, making it a perfect addition to your Halloween playlist. 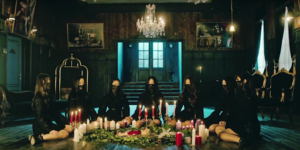 Dreamcatcher’s debut song ‘Chase Me’ is a thrilling track that will have you dancing or at the very least tapping your feet to the music. The MV, however, is a different story. It features some classic Halloween staples, a haunted house, witchcraft, and unnatural occurrences.

The MV isn’t bloody or gory like ‘Voodoo Doll’, but it relies on psychological horror to make you squeamish. The members of Dreamcatcher taunt the male exploring the haunted house using spells and spooky tricks. 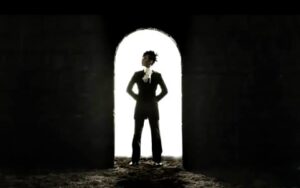 Big Bang has also released certain MVs that can be classified as spooky. However, G-Dragon is well known for embracing bizarre and unconventional themes both in his art and MVs. It is the creative side of him that comes out in the videos and captivates the audience with their aesthetics.

In ‘She’s Gone, G-Dragon stalks a girl through a maze and then murders her, making it a frightening MV with its gothic-like plot. The overall scenery will put you into a Halloween mood. 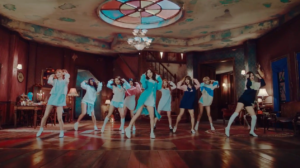 TWICE  is known for adding a cute twist to any Halloween concepts that they portray in their MVs, from becoming fortune tellers in ‘YES or YES’ to transforming into zombies in ‘Like OOH-AHH’ and everything in between. Their MVs are a great source of inspiration if you want to ditch the conventional Halloween costumes.

If you are not a fan of scary stuff and want to get into the Halloween spirit without feeling queasy or straight-up horrified by the end of the MV, TWICE’s ‘TT’ is the MV for you. It gives you all the treats without involving any tricks!

The MV starts with two children getting invited into a haunted mansion by nine girls in some of the best Halloween costumes you can find! From pirate to snow queen to vampire to Pinocchio, you can get inspiration for your next Halloween look from the girls of TWICE!

SHINee – Married to the Music

We saved the best for the last because this is a classic. When we think of Halloween, one of the first things that come to mind is SHINee’s ‘Married to the Music.’ It has a lively tune, and the whole setting is fit for a Halloween party.

The MV is spooky but also borderline hilarious. The members of SHINee attend a party thrown by a host who is collecting different features to make an ideal male face. It is the perfect balance of tricks and treats, giving you the right amount of spooky, but in a way that doesn’t make you squeamish!

After EXO’s debut, during an interview, Baekhyun said that one can hear a woman’s voice saying “Xie Xie” (thank you in Mandarin) at around 4:15 in the MV. It is only audible in the MV and not the actual song.

Watch all these videos and let us know in the comments which one is your favourite! You can also comment your favourite spooky K-Pop MVs that weren’t featured in this article.