by Contributor
in Culture, Events
0

On December 4, KTO (Korean Tourism Organization) India hosted a special screening of BLACKPINK: THE MOVIE as a part of their KXPERIENCE project. The event was held in PVR cinema, New Delhi. KTO had also organized a giveaway challenge in which the 30 lucky winners were invited to the special screening. The KXPERIENCE project is one of its kind, with an aim of elevating the Korean wave in India through various interactive events.

BLACKPINK: THE MOVIE, which released earlier this year is the first documentary movie of the popular girl group BLACKPINK and it covers their iconic performance moments and insights into their personal life and as artists. Fans had a joyride of their emotions and felt closer to the band as the screening came to an end.

Along with the screening, KTO offered Korean food as a part of the K-Food experience to the fans. They were also presented with a hamper from KTO as a souvenir, which had an ‘Imagine Your Korea’ face mask, Korean travel guide books and a Korean cooking book. To enhance the experience, there was a special arrangement wherein cut-outs of BTS were prepared for an interactive photo session post the screening event. 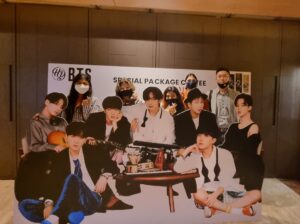 Mr Choi Young Geul, Director of KTO India was present at the screening and welcomed the fans by briefly expressing his gratitude towards those who were present and enjoyed the event. He also spoke about the concept of ‘promise’, which is preached in Korea and referred to the growing connection between India and South Korea. According to the Director, the promise is from the Indian Hallyu fans to the culture of Korea to keep supporting them. As the Korean wave keeps growing, these kinds of events help in spreading and growing the interaction and bond between the cultures.

The KXPERIENCE event is one of the first ever online consumer engagement initiatives organized by the Korean Tourism Organization to elevate the Hallyu wave and enhance the connection between India and Korea. The special screening was one of the many more-to-come physical events that KTO India is planning to implement as the situation gets better and support stays intact.

Are you eager to experience more virtual and physical K-Events? Let us know down below!

Review: 'Our Beloved Summer'- The Reality Of Youthful Romance (Episode 1 & 2)