Drama: So Not Worth It

The rise in the popularity of K-Dramas, K-POP and K-Movies have reached heights of success all over the world and there seems to be no stopping. The Korean Entertainment Industry is well aware of its global audience and has decided to appeal to them more than ever before. Besides many other contributions, Bong Joon Ho’s movies also played a great role with Hollywood stars as cast and of course, he is an Oscar winner now.

But the difference here is, South Korea’s first Netflix sitcom ‘So Not Worth It’ , is a new dish on the table. The plot centres on a fixed set of characters from different countries which has raised excitement in international fans because this is the first of its kind coming from the Korean entertainment industry.

All the K-Dramas we love are based on Korean characters but unlike mainstream K-Dramas, ‘So Not Worth It’ focuses on international students’ college life in South Korea. They’ve stuck to the term ‘inclusive’ in such a manner that their characters hail from all the continents of the world- America (Carson and Jamie), Africa (Terris and Hyun Min), Asia (Se Wan and Minnie), Europe (Hans) and Australia (Sam).

It offers bitter-sweet friendship, laughter, love and heartbreak. Apart from these, the sitcom also shows real college life problems like being broke all the time and surviving on noodles and rice, juggling part-time jobs and classes, living in an international dormitory and having your belongings lost or stolen and cultural assimilation. Therefore, it turned out to be relatable from the very first episode which kept us hooked till the end.

We usually see this pattern in American sitcoms and TV series which is why Hollywood has been the hegemon for decades. Millennials grew up watching FRIENDS, Big Bang Theory, The Office etc, now Gen Z is growing up watching K-Dramas and K-Sitcoms. However, one feature that the makers of ‘So Not Worth It’ has kept authentic is, the medium of language. The international characters speak Korean and not English.
As a following, it doesn’t come as a surprise that Korean is now the most preferred Asian Language among students all over the world and to study or work in Korea, it is of course important to know/understand the language plus it is after all a K-Drama in the end. 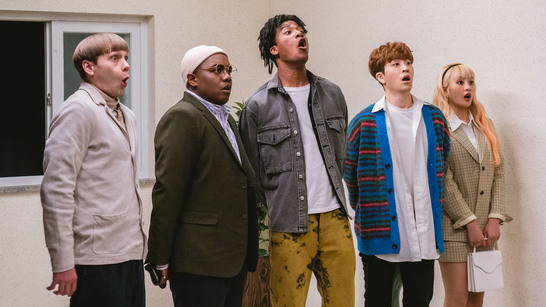 This student-friendly sitcom has attracted positive reviews so far and fans are already waiting for season 2. YouTubers from all over the world have made review videos on it and it’s as hilarious as the sitcom itself. With this, we conclude with a thought worth discussing. South Korea has always had a huge American influence in terms of economy, politics, education and culture. The Korean Entertainment Industry is now one of the biggest and most influential industry. As it broadens its reach, do you think it’s coming at par with Hollywood or has it gone further? Do let us know what you think.

Haven’t watched the drama yet? Check out the trailer