by Madhavi
in K-Music, K-POP, Review
0

A.C.E (에이스) is a South Korean boy group formed by Beat Interactive and co-managed with Swing Entertainment. The group consists of five members: Jun, Donghun, Wow, Kim Byeongkwan, and Chan.  A.C.E stands for Adventure Calling Emotions, meaning that the group wants to cause emotions that urge people to go on adventures and make their dreams come true.

Earlier this year, A.C.E released several collaborations with Western artists. They include the joint track ‘Down’ with American electronic duo Grey and Fav Boyz with DJ Steve Aoki and rapper Thutmose.

A.C.E got their fandom, ‘Choice’ excited with their concepts that took their breath away with mystifying charms. ‘Siren: Dawn’ is A.C.E’s first comeback of 2021 and their first since Swing Entertainment announced that they will co-manage the group alongside the original agency Beat Interactive. The album features tracks co-written by Bigtone and Madfresh. They had earlier worked on A.C.E’s 2019 single ‘Under Cover’. Their last mini-album was 2020’s ‘HJZM: The Butterfly Phantasy’. This is A.C.E.’s second song with the word ‘Higher’ in the title. The first was ‘Take Me Higher’, a single released back in 2018. 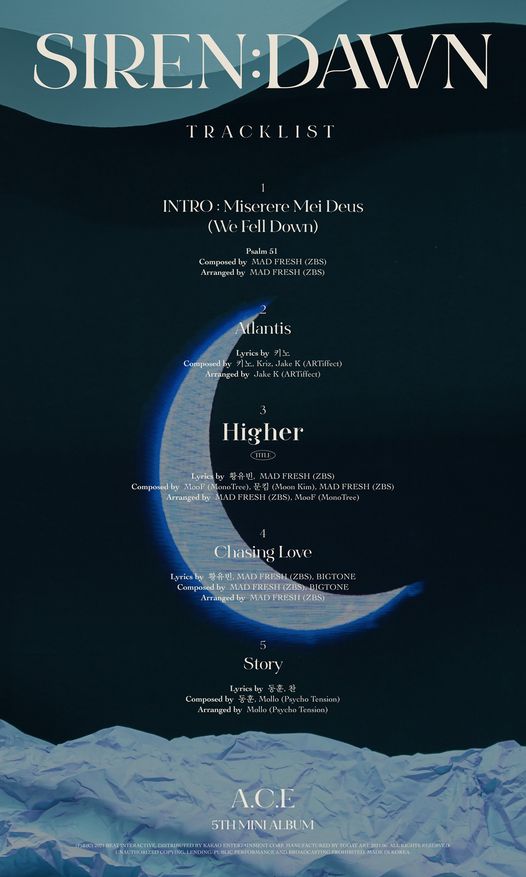 B-sidetrack ‘Atlantis’ was co-composed and written by PENTAGON’s Kino. Donghun and Chan participated in the composing and writing of ‘Story,’ another B-sidetrack.

[Verse 1]
We are in danger now
Holding you in the rough waves and pushing them away
The deeper you dive, the deeper you sink, we’re trapped in a tragedy

[Pre-Chorus]
Without you, tonight
Endless fall
Trying to breathe, but I can’t breathe
I’ve been wanting and longing for you
More and more, I’ll be more thirsty

[Verse 2]
Always stumbling
The string that grabbed me up
The end of a faded memory
Rewind the red thread
Callin’ you
But you are not answering
Yeah, you keep living your dreams

[Pre-Chorus]
The moonlight shining on you
Only exhale breath
I can’t talk about it
I want and yearn for you endlessly
More and more, it will be more drier

‘Higher’ is a cross between future bass and progressive house and was produced to be an aesthetic song. The vocals do a good job standing out over the abrasiveness and potentially overpowering energy of the future bass chorus.  It is a new concept compared to other songs of theirs. As a Choice, I was excited to see the full version of the song and finally, the song got released yesterday.

A.C.E music videos are always full of stunning imagery, even when they are simple in their nature, and I’ve started to associate this kind of stylistic choice with them. Their styling in the music video is also stunning, everyone looks so breath-taking and I think they fit this siren concept perfectly. Beat Interactive is really doing a good job concept-wise and overall, the music video is as beautiful as the trailers.

With this album, A.C.E tries to reach for the sky to get to the moon and handle the tides as the album is about going for your desires despite any fears. ‘Higher‘ takes you on a ride with A.C.E reaching their goals while trying to reach the moon. The verses were a lot simpler and softer, whereas the chorus was explosive. The song does a lot of contrast, there is still that bit of cohesion. I missed the rap sequence in this song, which would have given a different dynamic to the song, and could have eased us off the contrasting technique they employed from start to end.

A.C.E’s music videos have become aesthetically pleasing over the years. Aside from the storyline, I liked the sets and their clothes in the MV and some of their outfits look really cool like Donghun which looks like a sea urchin. The dance moves are smooth and graceful whether it is the jump or gunshot. I am a fan of the mini jumps they do, it work really well with the lyrics and their outfits gave the performance a lot of sensual energy that I am sure Choice is going to enjoy. Also, my favorite part of ‘Higher’ is the bridge, which is just fantastic. A.C.E never disappoints and I feel like they really found their niche in K-POP.

The opening scene of the MV starts with A.C.E members laying down on the floor with their faces covered with net-like mesh cloth. The MV scene continues with Chan and Jun around the moon dressed in white clothes. Also, not to forget the accessories look good on them. The MV continues with the edgy look similar to the eclipse or the red moon. There is a kick part in the choreography where they played with the aspect ratio in the video on the lyrics ‘yeah I am going higher’  and this is one of my fav parts of the MV. I am not even halfway through the MV already and the song is catchy for me.

For me, Chan’s part at 1.54 was confusing at first. But after looking at the MV again the confusion got clear. The red object in his mouth was the red marble/sphere representing the eclipsed moon. Later we can see the eclipsed moon turns into a full moon and swallowed by Chan. This scene in the MV leaves a question in my mind. Why did Chan swallow the moon?. There can be one theory as this is an eclipse concept and the spheres represent the moon. During the olden days, eclipses were believed to be due to some monsters eating the moon/the sun. Chan eating the moon can be relatable with this theory. Also, this is what I think, and not sure how this relates to the storyline.
Furthermore, the drop in the MV is smooth all together makes the chorus sound so good. Also, it is not overdone or loud and it sounds perfect. The fisheye lens effect with the transition of the water in the MV is eye-catching. I recommend you see this scene in slow-mo as the fisheye lens changes to a water droplet. While the scene zooms out into the water splash effect making members pop out of the water droplet into another scene, it ends up giving  the MV a cool vibe.

Later the members are seen in a natural surrounding with the trees in behind and a platform below. The platform represents water. There is one more theory as the album is based on siren’s concept they are trapped underwater and went to to the surface in ‘Higher’ looking for the moon in the end. It has been more prominent more groups do the grass and platform concept. Also, it is risky and not easy to dance on the grass having a platform like that as there is not much force that pushes you back in the air. According to me, they did very well with that jump. The MV scene ends with Chan sitting on the floor fading away with the tight close cut of the aspect ratio again.

A.C.E is basically a merman who lives underwater where the whole MV takes place but one day, they see a person above the surface represented by the moon and they fell in love at first sight. The MV and song deal with the longing for that person which makes them reach the surface to meet that person again. They reach above the surface in the last chorus where they can be seen dancing in nature. Before this, they were trapped underwater fighting under the veils in the MV. Also, they had fallen in love with the moon and the best way was for Chan to swallow the moon, which indirectly speaks that love is a drug and at the same time vital for survival. They cannot live without the moon and the absence is represented by the solar eclipse.

This is a song dedicated to Choice as they always reach our hearts with their music. Perhaps the moon in the MV represents Choice as no matter what or who it is for no one can stop them to reach Choice.

A.C.E is holding an online concert for ‘SIREN’S CALL’ on 10th July at 1 PM (KST). You can register here 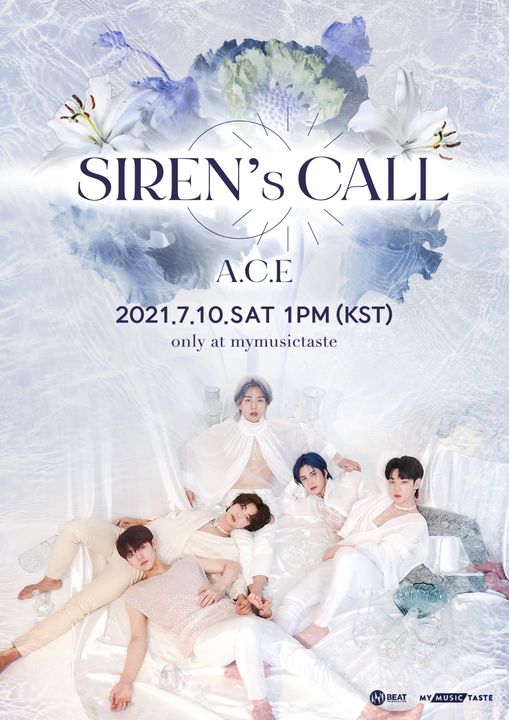 What do you think about the ‘Higher’ MV and the album? Do let us know in the comment section below.