by Ranjini
in Buzz, Featured, News
0

South Korea is announcing postponement/cancellation of events as the country enters a period of mourning following the Itaewon Halloween tragedy.

According to updated news, at least 153 people were killed and over 80 people were injured after being crushed in a large Halloween crowd in Seoul on 29th October, Saturday night, in one of the deadliest peacetime accidents in South Korea’s recent history. The country had come to a standstill in 2014 when the Sewol ferry capsized and killed 304 people.

According to reports, the crowd surge occurred during one of the most celebrated festivals in the nation’s capital, where, as many as 100,000 people crowded the narrow streets of the Itaewon nightlife district Saturday evening for Halloween festivities. Over the years, Halloween is celebrated widely in the country.

ROK President Yoon Seok Yeol held a press conference at the Yongsan Presidential Office on October 30 KST, the morning after the incident, announcing an emergency public discourse related to the Itaewon tragedy and declaring a period of national mourning beginning today and lasting until November 5.

“Following the president’s directive, the government has decided to observe a national mourning period until midnight of Nov. 5, during which the nation will mourn the perished,” Prime Minister Han Duck-soo told a media briefing. He also stated that a joint altar for the victims will be built at an undetermined location in Seoul. 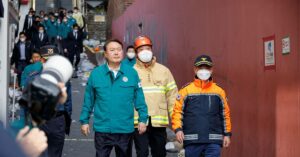 The government will support funeral preparations and fully mobilise emergency medical services to treat patients, including by assigning public servants individually to those requiring assistance, Yonhap news agency reported. Following the announcement In connection with this, all entertainment and schedules for today are paused or cancelled. Among cancelled programming, SBS has cancelled today’s episodes of ‘Inkigayo,’ ‘Animal Farm,’ and ‘Running Man,’ tvN has cancelled episodes of ‘Comedy Big League’ and ‘The Game Caterers 2,’ KBS has cancelled ‘1 Night, 2 Days’ and ‘Boss in the Mirror,’ and MBC has cancelled today’s episode of ‘King of Masked Singer.’ SM Entertainment has cancelled their event ‘Halloween Party’. Several Kpop artists has also cancelled their concerts and tour due to this tragic incident.

All government offices and overseas missions will lower their flags to half-mast and cancel or postpone non-essential public events during this time. Civil servants and employees of public institutions will wear ribbons to express their condolences, according to officials.

NEW death toll: 149 in South Korea Halloween disaster described as a "presumed stampede" in Seoul's Itaewon nightlife district. Authorities are having a hard time identifying many victims & asking families for help. Many dead are in Halloween costumes without ID. @PamelaBrownCNN pic.twitter.com/K2wEg8V25T

Namaste Hallyu sends deep condolences to those affected families who have lost their loved ones and we pray for speedy recovery of the injured and those who witnessed it.