Three episodes of Snowdrop will be released this week

by Varsha Alan
in K-DRAMA, News
0

Ongoing K-Drama ‘Snowdrop’ has released a special broadcast schedule to put the audiences’ concerns regarding the plot to rest.

“The controversy continues for JTBC’s “Snowdrop.” Due to the nature of the drama, all narratives cannot be released at once, so it seems that a misunderstanding has arisen from the initial development. In response, JTBC decided to specially air episodes ahead of schedule to ease viewers’ concerns.

Episodes 3 to 5 of “Snowdrop,” which will air for three days from December 24 to December 26, will reveal the background story of Su Ho (played by Jung Hae In), a North Korean spy dispatched to South Korea, coming to Korea and the unfair power situation, which will explain the probability of the initial setting. In the drama, it will turn out that the Agency for National Security Planning is the organization that brings the spies to South Korea, and the leaders of North Korea and South Korea will collude for power and money. In addition, [the episodes will contain] stories of young people who get caught up in their secret operations.

JTBC respects various views and opinions about our content. In order to hear the opinions of viewers, we are listening to diverse voices by opening the portal site’s real-time chat window and the official viewers’ message board. This special schedule was also decided in order to address viewers’ concerns. We will continue to listen to your opinions and do our best to create good content.” 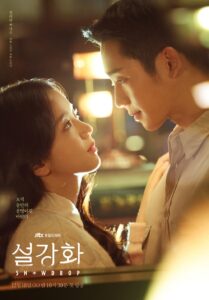 The controversy behind Snowdrop’s plot first began in March as speculations regarding the distortion of historical events rose rapidly. Before the release of the drama’s episodes, the production team had addressed the concerns and speculations through many official statements, firmly denying any form of distortion. But the backlash rose once again when the drama’s first two episodes premiered.

A National Blue House petition was started on December 18 for the drama to be stopped airing. The petition states, “There are definite activist victims who were tortured and killed during the democratization movement because they were [falsely] accused of being spies without any grounds. Creating a drama with a plot like that despite this historical truth undermines the value of the democratization movement.”

The viewers began to criticize various aspects of the drama, including the male lead’s character being a North-Korean spy, when in reality many were killed after being falsely accused as secret agents. Another point of contention was a male character who had a backstory of working as a team leader at the National Security Planning Agency (NSP), which was part of the authoritarian regime at that time. The inclusion of a song associated with the democratization movement during the scene when Su Ho, a spy, is fleeing the NSP was also questioned.

As of December 21, 12 PM KST, the petition has crossed over 3,00,000 signatures and is now eligible to be acknowledged by the Government (the minimum required signatures is 2,00,000). The controversy also led to many sponsors back-out of the drama.

“This is JTBC’s statement regarding controversy about the drama “Snowdrop.”

Following the broadcast of “Snowdrop,” controversy is not dying down based on false information, so we are releasing a statement.

First of all, the background and motif for important incidents in “Snowdrop” are the time of military regime. With this background, it contains a fictional story of the party in power colluding with the North Korean government in order to maintain authority. “Snowdrop” is a creative work that shows the personal stories of individuals who were used and victimized by those in power.

Most of the misunderstandings regarding concerns of “history distortion” and “disparaging the democratization movement” criticized by many people will be settled through the progress of the drama’s plot. The drama includes the production team’s intent of hoping for no repetition of an abnormal era in which individual freedom and happiness are oppressed by unjust power.

Although we unfortunately cannot reveal much of the plot ahead of each episode, we ask that you watch over the future progress of the plot.

In addition, in order to hear the valuable opinions regarding JTBC’s contents, we will listen to diverse voices by opening the portal site’s real-time chat window and the official viewers’ message board.

The main values that JTBC aims for are the freedom of content creation and independence of production. Based on this, JTBC will continue to contribute full effort into showcasing great broadcasts.”

Stay tuned with us for further updates.