Woong and Yumi go through major ups and downs during the course of the weekend!

Our ship has sailed, quite literally, with Woong and Yumi’s cells in it. Even though our leads are dating, hurdles continue to come their way, and it is exciting to see how the cells solve their problems for them. After all, as Woong’s cells say, “there is no happiness without hardship.“

Yumi and Woong are finally dating and as happy as we are for them at the start of episode 5, we can’t help but be nervous that something or the other will happen. And sure enough, disaster strikes in the form of Sae Yi. 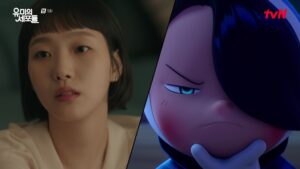 Yumi realised that Sae Yi was a girl, and chaos ensued. Yumi’s cells battled it out, debating whether boys and girls can be just friends. When Woong got her some Yuzu Tea, Intuition Cell barged into the town, causing Yumi’s thoughts to run wild. She realised it was from Sae Yi, and a seed of doubt was planted.

Her worry was eased when Woong wished her birthday, but it came in full force not long after. When Yumi and Woong went out to celebrate her birthday, she clicked photos, possibly to post them on her social media just to spite Sae Yi and show off her love life. In Cell Land, the cells excitedly tried to guess what Woong got Yumi. The excitement died instantly, only to get fired up again when a necklace was revealed underneath the portable charger. 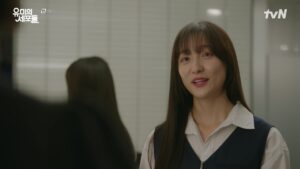 Woong ends up having to visit the office for some work. So, he takes Yumi with him as it is her birthday as he does not want to leave her alone. After accidentally meeting Sae Yi at the washroom, their whole interaction ends up being quite hilarious to watch as the two are passive-aggressive with each other. The seed of doubt germinated into a flower and kept growing back when Love Cell and Reason Cell cut it. Yumi leaves the office and snaps at Woong when he calls her back to ask why she left without informing him.

The best thing about this whole situation was that Woong stood up for Yumi. He later went to her home with cake. He tried to explain the situation but being his clumsy self could only dodge or give curt answers. Woong’s cells worried if the two would break up, but Yumi forgave him, and the two went up to her place.

Stomach Pains, A Trip, And A Lot Of Embarrassment 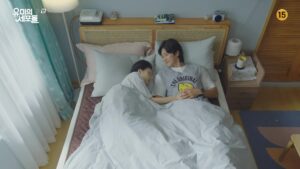 Woong’s Intestine Cell decided that giving him stomachache was a good idea during his first visit to Yumi’s house. Woong was so excited, but then it all turned around. It was so endearing and funny to see him get so embarrassed. This episode gave the viewers a lot of second-hand embarrassment and things to laugh about. However, his face lit up when Yumi stopped him from going back and took care of him. The following morning, the two plan a trip together. After all, there is nothing better than a trip after some serious trouble. 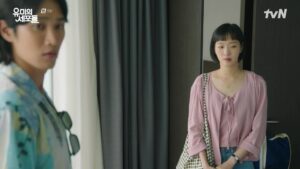 As Yumi’s Travel Cell has passed away, Reason Cell has taken up the responsibility to make the trip enjoyable. Due to circumstances, Yumi ends up booking the only room available at the hotel Woong wants to go to. However, along with the double bed ocean view, the room also has a peculiar feature, a glass bathroom. Woong decided to complain about the room even though Yumi protests. He goes to the reservation room to listen to the recording, only to find out the truth, and it’s Yumi’s turn to get embarrassed. Woong’s Sullen Cell, the second son of King Anger, enters the scene. Woong gets angry, and the situation escalates. The two choose to leave for home.

However, Woong (once again) saves the day by making peace with Yumi. The episode ends with the two making it through the fight and emerging as a stronger couple. 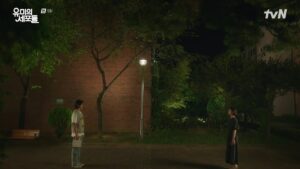 Yumi’s cell is full of fun and emotions of the cells. Usually, most K-dramas give us a Happily Ever After ending for the leads and don’t try to show the viewers what happens after two people get into a relationship. The way we think is presented in the form of cells. This makes us see the mundane everyday scenarios as being more dramatic and enjoyable than we believe them to be. The show is truly a slice-of-life drama.

Well, that’s it for episodes 5 & 6. Are you watching this drama? What do you think about this? Let us know in the comments or tweet to us. We’ll see you next week with episodes 7 & 8.