This week's episodes were low-key fillers!

by Contributory Writer
in K-DRAMA, Review
0

‘High Class’ has reached its mid-point with episodes 9 & 10 which aired this week, and we are finally moving closer towards unrevealing the central conflict. We knew from the get-go that each and every character has dark secrets hidden behind the mask of kindness they were wearing, but now these masks are slowly getting uncovered.
As the plot is progressing we just cannot believe some of the things that are occurring even though we have theorised about them in our past reviews.

The moments of Danny Oh from starting to now appeared as a recap. Yeo-Wool asked Oh Soon to be her legal representative for the case and to finish it fast so that she can take Yi-Chan with her. She asked him to pick Ji-Yong’s handphone from her house before police started searching her house. He went there and took the phone but he saw something. What’s that? What did he burn? Koo Yong-Hwe search her house and found that she looking at his husband’s case. Nam Ji-Sun is suspicious, Yeo-Wool told Yong-Hwe. Na-Yoon was the CCTV of the room where all instruments were.
She saw someone who destroyed it and she was so shocked as viewers were. Young-Hwe had a talk with Na-Yoon about the statement she gave against Yeon-Wool. Yeo-Wool got released and Yong-Hwe still doubt her. Na-Yoon and Jae-In had emotional scenes and they were sorry for their lies to each other. What are they sorry about? Nam Ji-Sun told Jung-Woo that they will go to Hawaii for 2 weeks to stay away from these police things. Does she have a connection with Chair Man’s death? Jung-Woo is having affair with Rachel and maybe Ji-Sun doesn’t have any idea about this. Police arrested Chef Jung for the death of Doh Jin-Sol. He was asked many questions and he told them the truth. Yeo-Wool gets the call from her workplace that her foreign client is in Jeju and they will meet her at 7 pm today. Danny was listening to all the talk she had! 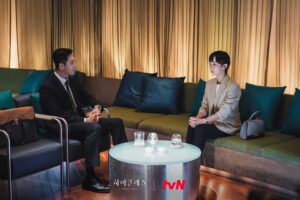 She went there and it was Alex Comer who wanted to meet her. He told her that he is Ji-Young’s legal and accounting agent. He gave her the ring of her husband and told her about his last wish. That’s to let him leave, to registrar his death. He gave her a voice note of her husband. They faced the Foundation’s fund loss back then. Cha Do-Young breakup with Chef Jung. Her husband invited him over to his place for lunch. Maybe he knows about their relationship?
Someone in a Black Coat in rain came inside the house and Yi-Chan saw that person and screamed. Yeo-Wool came out and the glass window broke off. They were so scared but Danny came and helped them and caught that person, Sim Ae-Soon was there. They arrested her and Yeo-Wool went to their guest house with Yi-Chan. Yi-Chan can not speak due to stress or shock. Cha Do-Young went for inquiry for the relation between her and  Chef Jung. Yeo Wool came as her Legal representative. Yeo-Wool heard that Sim Ae-Soon killed her husband and her daughter went missing since she came back after spending 15 years in jail. Hwang Na-Yoon asked Yeo-Wool to release Sim Ae-Soon. 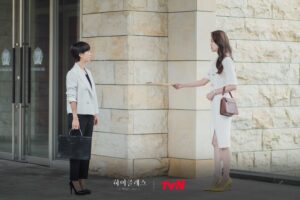 Nam Ji-Sun and Alex met. Did they kill Chairman? Who will be the new Chairman? Yeo-Wool destroyed the death registration form and asked Alex to meet. She told him she will not register his death. She called Na-Yoon and told her about his last wish and other things. Yi-Chan is having counseling. Yeo-Wool met Sim Ae-Soon and she told Yeo-Wool that she was not the one who throw the stone and there is someone who is watching her. Yeo-Wool can not find Ji-Yong’s phone but then she saw the family photo frame is back in its place but she remember that it was facing downwards. She saw the camera recording and there was someone in recording but they can not find out who he is. 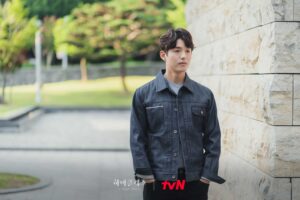 Danny and she talked about the recording and then she told him that she can not find the phone of Ji-Yong. Danny told her that the phone is in her house only. She called and followed the voice and it was from a wall. Danny went to her house and they found the secret door and they opened it and saw that someone was keeping an eye on her the whole time but who is that person? Yeo-Wool went crazy when she saw all of that.

The drama itself is exciting, and the plot spins the viewers in, forcing them to think about all the theories.  Yeo Wool’s character is trying hard to be strong even in the worst conditions. This week’s episodes were paying detailed attention to other characters. The drama has picked up the pace once again, and the mysteries are starting to appear.

Well, that’s it for episodes 9 & 10. Are you watching this drama? What do you think about this? Let us know in the comments or tweet to us. We’ll see you next week with episodes 11 & 12.