The upcoming album, I SAY MAMAMOO : THE BEST has 23 tracks!

MAMAMOO is set to make a comeback on September 15 and days before their comeback, the track list for the same has been released.

As stated earlier by RBW,  the upcoming album is a best-of album that will look back on MAMAMOOs past seven years which will include new versions of their past title tracks and B-sides that have received lots of love, along with a new song with the album. Although fans knew that this was an album comprising of their hit tracks, no one was ready for a 23 track list and Moomoos are definitely excited!

I SAY MAMAMOO : THE BEST

Some of their best songs are getting remix or new versions. The new versions are also titled as “Dramatic Version”, “Blistering Sun Version”, “Orchestra Version” etc and this only makes the anticipation higher. Fans will also get to hear the extended version of “Destiny.” It may be mentioned that Moonbyul is credited  as the lyricist for 17 songs out of 23 songs! Check out the track list list below. 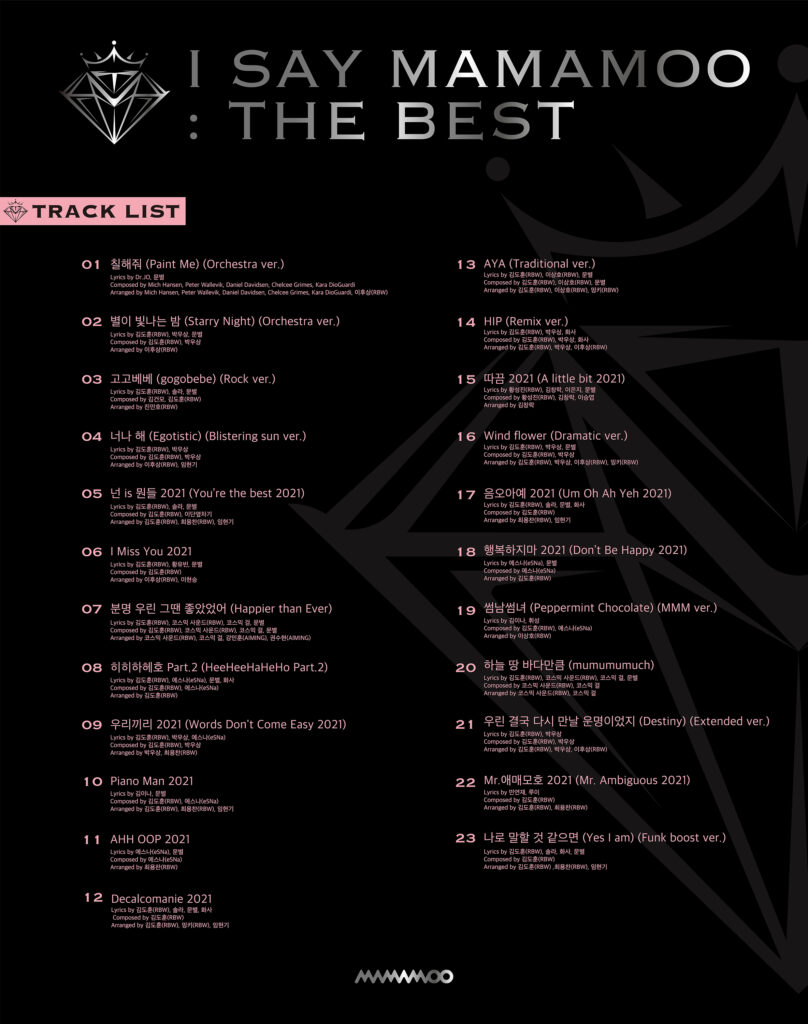 The upcoming album has 21 songs from their 7 year discography with new versions and remixes and includes 2 new songs – Happier than Ever and mumumumuch.  With new versions of their past songs and the remixes and the addition of another 2 songs, this is a new album for the fans and one can be sure that MAMAMOO is ready to serve with their vocals.

It maybe mentioned that this is MAMAOO’s first comeback after Solar, Moonbyul, and Hwasa renewed their contracts with RBW. Member Wheein chose not to renew her contract with RBW and is officially with THEL1VE, a label founded by VIXX’s Ravi. However, fans of MAMAMOO can rest assured as Wheein has an extended agreement signed with RBW and will continue to participate in MAMAMOO’s activities including albums and concerts until December 2023.