2021 MAMA will be held in South Korea this December!

On October 13, it was announced that Lee Hyori will be hosting the 2021 ‘Mnet Asian Music Awards’. 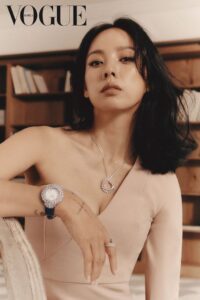 This year’s MAMA is returning with a brand new theme, ‘Make Some Noise‘. A representative from Mnet stated, ‘With the concept of ‘MAKE SOME NOISE,’ 2021 MAMA intends to show the world the renewed and upgraded power of music to respect the value of difference and breakthrough prejudices. We cast Lee Hyori as the host because we felt that she embodied the values that we wanted to embrace for this year’s MAMA.’

In 1998 Lee Hyori debuted as the leader of the popular girl group Fin.K.L . Then she started a successful solo career s in the early 2000s.

During her rise as a solo singer, she was also active on several variety shows. She starred in variety shows like ‘Hyori’s Homestay,’ where she showcased her married life with musician Lee Sang Soon. She also joined project groups like SSAK3 and REFUND SISTERS.

Listen to DON’T TOUCH ME by REFUND SISTERS-

CJ ENM’s director of music content Kim Hyun Soo, who is in charge of the MAMA ceremonies, stated, ‘2021 MAMA will be a place for artists and fans to communicate through each other’s voices. The hundreds of thousands of voices of fans are all different, but no matter where they are, they can come together as one through K-pop. The music we need most is the harmonization of fans all over the world.’

For the first time, MAMA will include data collected from the streaming platform Apple Music into the existing judging criteria because of the global impact of K-Pop in addition to the data from Gaon, Twitter, and YouTube that had been included in previous years.

2021 MAMA will be held in South Korea at CJ ENM’s Contents World in Paju City in Gyeonggi Province on December 11, due to the ongoing pandemic situation.