UAENA's are taken aback with the announcement of a new project as IU releases teaser for 'Pieces'!

Just when K-pop fans thought this year couldn’t get any better, solo queen IU has dropped huge news. On December 21, the artist dropped an artwork teaser for her upcoming single on her SNS channel.

The teaser for the project titled ‘Pieces’ is an illustration of multiple books stacked on one another with an alarm clock on the top. Each and every book has a title that correlates to the title of the artist’s previous work along with the year of the release of the said work.

The project which has been titled ‘Pieces’ has garnered intense discussion among the fans with speculations regarding the project increasing. While some fans are guessing that the project might be a mix of IU’s previous work, some are hoping for it to be a brand new song. 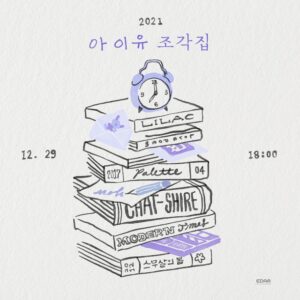 IU had a recent comeback with her single titled ‘Strawberry Moon’ on October 19. The single written and composed by the artist herself has been loved by the fans to date and has been topping the Gaon Music Charts.

In recent news, the artist won the award for Best Female Artist, Best Vocal Performance in the solo category and Best Collaboration at the MAMA 2021. Fans all over are excited for the upcoming ‘Pieces’ project which will be released on December 29, 6 PM KST (2:30 PM IST)