The year starts with a bang!

On January 1, Yuehua Entertainment confirmed that Choi Ye Na better known as Yena will be making her solo debut soon.

Following the news, the artist released a teaser poster with a coming soon sign and a smiling emoticon. There also appears to be the word ‘Smile’ written on the poster which seems more like a corner of a room along with the mention of the debut date.

Yena was the member of a popular yet temporary girl group IZ*ONE formed through MNET’s reality show ‘Produce 48′. She was the lead vocalist, lead dancer as well as the main rapper for the group. After their debut in 2018, the group was active for two and a half years in accordance to their special contract and thus disbanded at the first half of the year 2021. 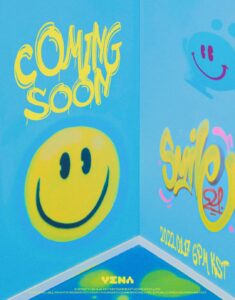 Following the departure from the group, the artist made her acting debut with a lead role in Naver TV’s ‘The World of My 17′. Now with the news of her solo debut, for which the fans were excitedly waiting, the artist is all set to display her skills. According to the poster, the debut date will be January 17, 6 PM KST (2:30 PM IST).