Former GFRIEND Members Eunha, SinB And Umji To Debut As A Trio ‘VIVIZ’

Former GFRIEND members, Eunha, SinB and Umji will be promoting as a group under Big Planet Made Entertainment.

On October 6, representatives of BPM Entertainment confirmed that the three members have signed exclusive contracts with the agency. This makes them the last members to find a new agency after leaving Source Music. 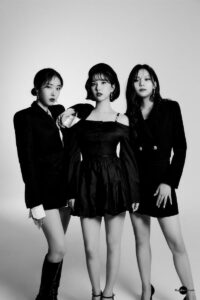 In addition to confirmation of signing with a new agency, Umji announced on her personal SNS that they would be debuting as a three-member group. Amidst the buzz and anticipation of seeing the three members together, the fans found out that the agency had filed for a trademark name VIVIZ (pronounced as ‘Vi-Vi-Zi’ in Korean) along with a Korean name ‘비비지’ (pronounced as ‘Bibiji’). A new MelOn account for the trio was also discovered under the same name.

The agency has also officially confirmed the debut of the trio under the name VIVIZ and has released their visual film on Youtube.

More details on the debut date of VIVIZ is expected to be announced soon.

Popular girl group GFRIEND disbanded on May 22, 2021, following the expiration of their contract with the agency. Sowon has signed an exclusive contract with IOK Company as an actress under her birth name, Kim So Jung while Yerin has officially signed under Sublime Artist Agency. Yuju is expected to make her solo debut soon under Konnect Entertainment.