EXO’s leader Suho along with Lee Soo Man, the Executive Director of SM Entertainment are set to attend the Korean Studies Conference held at Stanford University as speakers.

The conference is set to be held from May 19 to 20 at Stanford University’s Bechtel Conference Center. This conference is held in commemoration of the 20th anniversary of the establishment of the Korean Program which is a centre that specializes in Korean Studies. Scholars from all over North America who are experts in each field have been invited by the Asia-Pacific Research Institute.

The conference aims at the potential of Korean Studies with a focus on international and cultural aspects. It will include panel discussions on issues such as security on the Korean peninsula, North Korean human rights, U.S.-DPRK relations, and the rising global popularity of South Korea’s soft power, with a focus on K-Dramas and K-Pop.

Back in 2011, Lee Soo Man visited Stanford University and gave a lecture about Hallyu’s business strategy. This time, he will be speaking about the future vision of K-Pop. EXO’s leader Suho will join the Korean wave discussion panel and will share his honest story based on his experiences as a K-Pop artist. 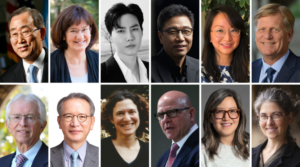 The conference will be live-streamed on APARC’s YouTube channel.

On April 4th, Suho released his second mini-album ‘Grey Suit’ and ranked #1 on iTunes in 33 different countries including India. followed by another MV release for ‘Hurdle”‘ on April 7 KST.

HOT ISSUE Announces Their Disbandment Ahead Of 1ST Anniversary

HOT ISSUE Announces Their Disbandment Ahead Of 1ST Anniversary