Ahead of his comeback, Former B.A.P Member Jongup spoke with us about his latest album and sent a special message for his Indian fans!

by Team NH
in Interview
10

Former B.A.P Member Jong up is back with ‘US’!

Moon Jong Up mononymously known as Jongup, gained popularity as the main dancer and lead vocalist of the now-disbanded KPOP group B.A.P under TS Entertainment. At present, Jongup is signed with Big Ocean ENM as a soloist. He released his solo debut single album, ‘Headache’ featuring Yunhway on May 7, 2020, and garnered much support from his fans worldwide. He also recently featured in Mr Queen’s OST, ‘Venus.’

Besides his amazing vocal skills and dance, Jongup can also rap and is also an actor. He performed in the play ‘The Lost Village’ and has also been cast for the upcoming movie, ‘Idol Recipe’.  Jongup is truly a power packed artist. Ahead of his comeback, he pre-released an MV on 1st July 2021, for the song ‘Find‘, which features Moon Sujin. The song has a slow R&B beat with a soothing melody that reveals a deeper, more emotional side to his music. 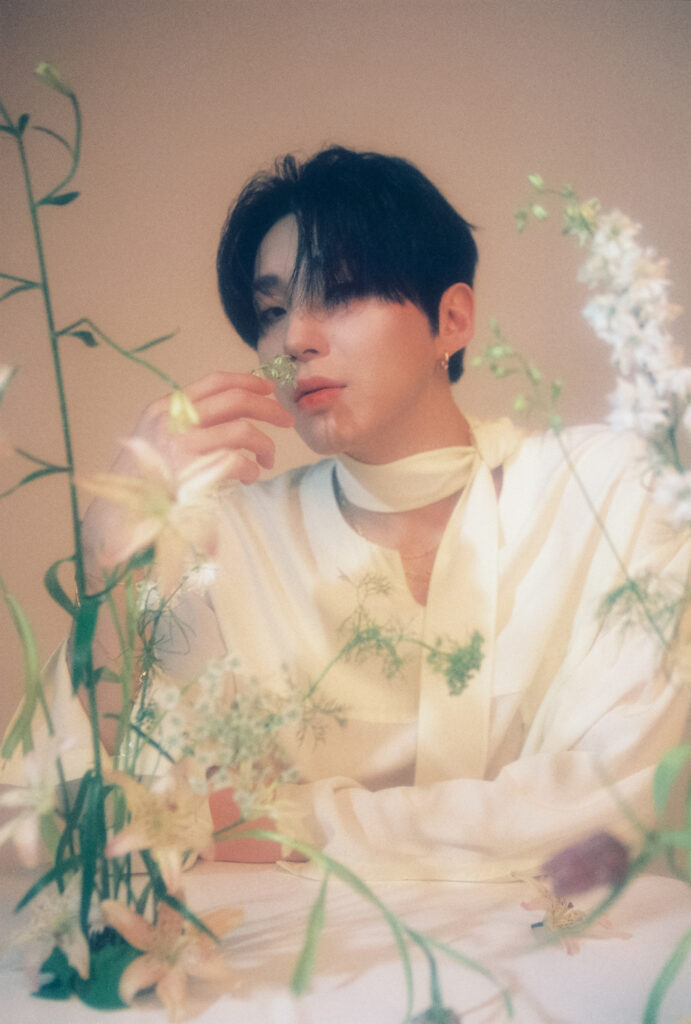 Jongup is now back with his first mini-album titled ‘US‘ which released earlier today. The album has five tracks starting with the title song ‘US’, ‘Photo’ featuring Bang Yonguk, pre-release single – ‘Find’ featuring Moon Su-jin, ‘GOUP’ featuring EK from ‘Show Me the Money 8’, and his debut single, ‘HEADACHE’ featuring Yunhway.

Along with the featuring of such talented list of artists, Moon Jong-up also continues to explore his musical capabilities in this album, by participating in writing and composing lyrics for ‘Photo’, ‘Find’, and ‘GOUP’. He further shows why he was the lead vocalist in his former group with ‘US’.

With strong vocals and dance as well as the vintage theme aesthetic music video, ‘US’ has quickly jumped into our playlist and we cannot stop singing to it. 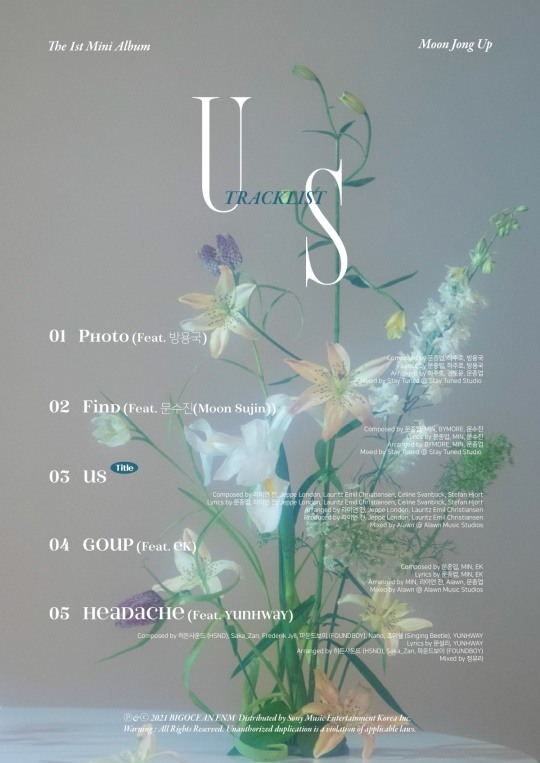 Ahead of his comeback, Jongup spoke with us about his latest album, his growth, B.A.P, Indian fans & more. As 2nd Generation fans, this was a wonderful opportunity to be able to speak with an artist who gained so much fame and made waves, even before internet took over the way it has right now.

From his debut in 2012 as part of B.A.P to now, Jongup believes that among all things, his thoughts have changed the most. He shares that the more he learn and know, the more he need to know and thus, he has a mindset, to live by learning for the rest of his life. He believes that the biggest difference of promoting as a group and as a soloist is that,  “Now I have to bear the burden which I shared with the members when I was in a group but at times, it’s also good to have that much love alone.”

The shift from group to solo, along with years of working as an idol has brought about a process of change and growth and opened new perspectives and views for the talented soloist, “Through many experiences, I have learned and felt that a person cannot live alone in the world. So, I want to say ‘thank you’ to the people who work for me and work with me.”

His former group B.A.P brought about a bad-boy image which was loved by fans across the world and their debut ep ‘Warrior’ landed at Billboard’s World Albums Chart at #10. The group then continuously made waves with their music and topped charts across the world hence showing their global status. Although the members parted ways with their previous company, the boys remain good friends as they continue on their own individual paths while cheering for each other for their solo activities. The boys are also often seen hanging out together hence making their fandom, ‘Baby’ very happy.

While talking about how former B.A.P leader Bang Yong-Guk has participated in his song “PHOTO” as a featuring, Jongup gives hope to the fandom as he assures,

“If the timing is right, I think a reunion of B.A.P is possible at any time.”

The day may not be far off, as along with Yongguk’s featuring, other B.A.P members Zelo and Youngjae also participated in his Listeners; Listen “US” and in the video, one could see how they truly enjoyed being with each other.  The members shared their honest thought on his comeback as they gave their opinions about how they loved the comeback, Jongup’s growth as an artist and that, the fans had lot to expect hence making the fandom anticipate more. This was also the first video in a very long time where the members had appeared together so for B.A.P fans, this was a blessing. The members were definitely right though as with ‘US’ we see a mature side of Jongup in terms of music, vocals or even style.

Jong-up was also recently cast in “Idol Recipe” and  he gave a sneak peak of his character, “My cast is ‘Jang Jun’, a member of a mixed group. He gets caught while dating at work and gets scolded”, thus building more anticipation for his upcoming appearance.

He shares that in terms of his style of music, over the years, the thing that has changed the most is that, he now listens to all genres and he particularly likes R&B dance hip-hop the most. When it comes to incorporating it to his music, he admits that there are so many genres he want to challenge himself with, but the one that comes to his mind right now is EDM.

For Jongup, the process of creating music/songwriting is mostly done with his friend, Min – “We usually start with the track. Sometimes when a track comes out first, we write melodies and lyrics together.” He further says that he has a lot of influence when it comes to his music but ever since his younger days, he admires Chris Brown and he still loves his music. This however doesn’t come as a surprise to his fans, after all, Jongup’s dancing and vocal skills have always been on point. 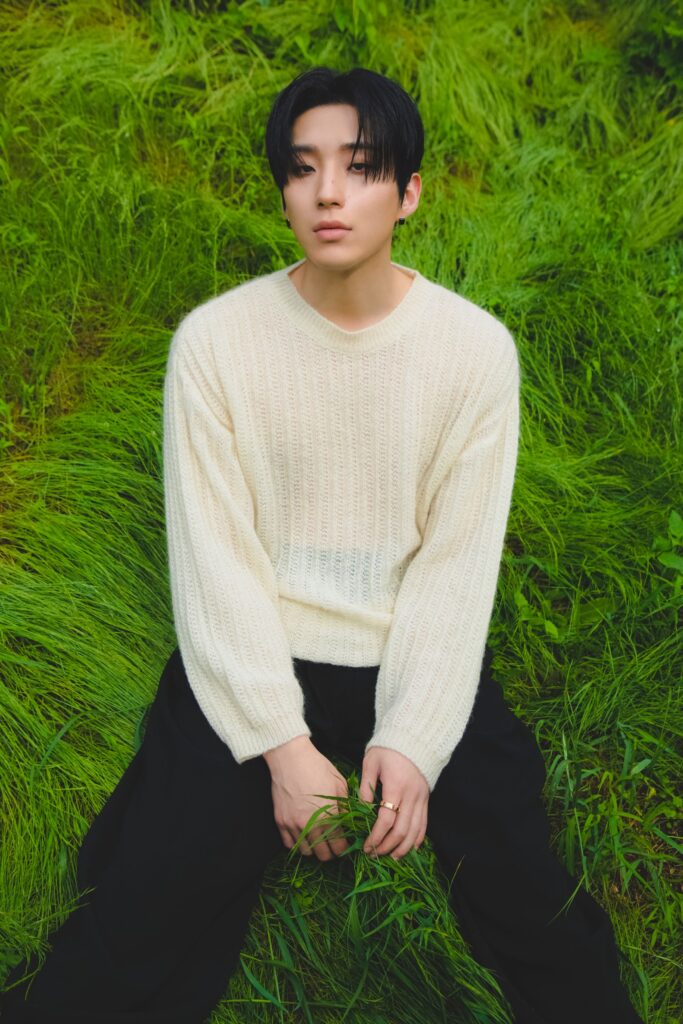 With ‘US’, the title track of this album, Jongup shares that, he liked it as soon as he heard the guide.

“I wanted each track to be different from genre to mood. I had a lot of meetings to go in the direction that I wanted. There were some disappointing parts in the process, but all the processes can’t always go perfectly in the direction I want, so those parts were difficult but overall, this was a great experience. ” – Jongup on the process of making ‘US’

Jongup agrees that he has gotten used to the life of an idol, after all, its been nearly 10 years since he debuted as an idol and if he had a chance to do any special activities with his fans, he would want to go camping with them. He further adds that if he could go back and give an advice to his former self, he would tell himself, “Be nice to Baby”.

‘Baby’ is the fandom name for B.A.P but now, Jongup also has another fandom name created by the fans themselves, ‘MOONW4LK.’  He shared his thoughts on his fandom name and also sent a messages for his fans across the world especially in India.

“‘MOONW4LK’ is such a cute name. I love you always. You know that, all this is done thinking only of ‘MOONW4LK’, right? As soon as Covid-19 calms down, I will fly to you.”

And while we await for him to come visit us, let ‘US’ be on your playlist.

MV Review: Hopes are Up with Beomhan ft. Roda’s New Single ‘Sun’s Up!’

Idol Group Members From Straykids, Ateez, Block B, Wanna One, AB6IX, The Boyz, Set To Appear On ‘The Fishermen And The City’

Idol Group Members From Straykids, Ateez, Block B, Wanna One, AB6IX, The Boyz, Set To Appear On 'The Fishermen And The City'