"EVERGLOW is a group that always shows powerful performances"

If you’re a K-POP fan, chances are you have already heard ‘Bon Bon Chocolat’! With powerful choreography, vocals, addictive beats and signature steps, this song made sure the K-World knew about ‘EVERGLOW’; a girl group under Yuehua Entertainment.

EVERGLOW consists of E:U, Sihyeon, Mia, Onda, Aisha, and Yiren. They debuted on March 18, 2019 and started with a bang as their debut single ‘Bon Bon Chocolat’ landed in Billboard’s top five World Digital Song Sales hit and with each comeback they have continued to dominate the music scene. ‘Dun Dun’ charted on the World Digital Song Sales chart, and ‘Reminiscence’ entered the World Albums chart at number 14. In 2021, their songs ‘First’, ‘Don’t Ask Don’t Tell’, and ‘Please, Please’ peaked at positions 5, 20, and 21, respectively but that’s only the beginning.

Ever since their debut, the group has carved out a name for themselves and have racked up hundreds of millions of views on their MVs and enjoy a lot of popularity. They are also the 4th generation girl group with the most monthly listeners on Spotify and recently, ‘Bon Bon Chocolat’ reached 100M views on YouTube. For the 4th generation group, this is their 4th music video to reach this milestone. EVERGLOW leader, Sihyeon expressed their gratefulness to their fans and spoke about their dream, “Thank you all so much for your interest in our music videos. Through our music videos, we want to give you all healing when you watch it, as much as the high number of views. Our dream is to become a group that is recognised all over the world.”

The girl group recently released ‘Promise’ in collaboration with UNICEF’s Promise Campaign, that aims to spread hope for the younger generation and also bring to light the issues faced by the youth.  EVERGLOW even organized a dance challenge for the same and the members shared what the song and the campaign meant to them.

“Ever since I was little, I thought a lot about wanting to be helpful while watching UNICEF’s videos. At that time I didn’t know how to help or how to find ways to help. It’s very meaningful to be able to give hope to young people all over the world under the name of EVERGLOW. I’m grateful! I would like to thank UNICEF for giving us a great opportunity like this.”  – E:U:

“I think it was a very meaningful work since it was a campaign for children all around the world. As the song is about hope, I wish that it can be a song that gives strength to children when they hear the lyrics. I also want to do many projects that can give this kind of good influence in the future.” – Sihyeon

“The Promise Challenge is very meaningful to us. I hope that many people around the world can pay at least some attention to children through us. We are really grateful to be able to work with UNICEF at the centre of the project! We request you all to show a lot of interest and participate.” – Mia 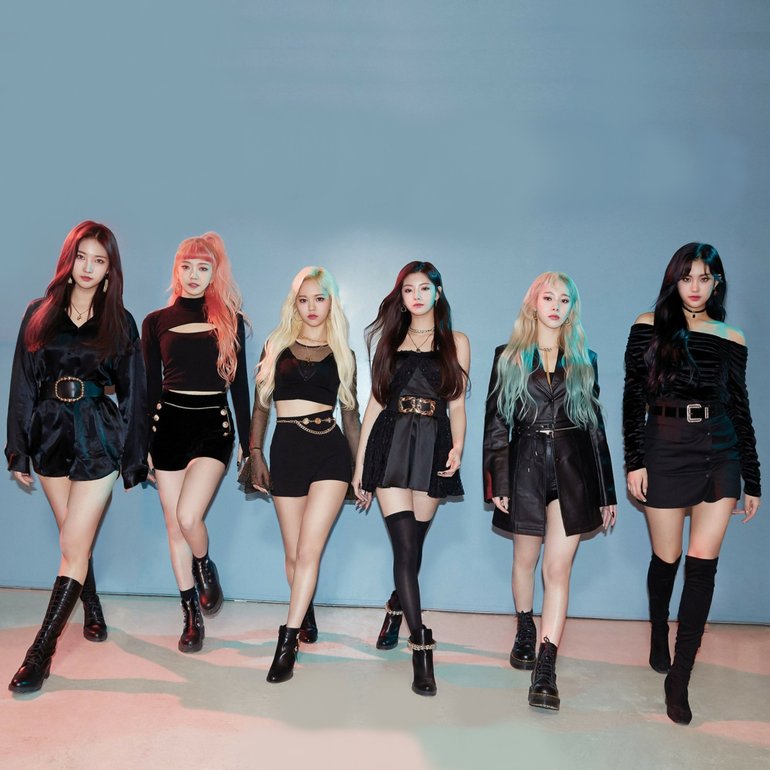 It’s been two years since their debut but it is only the beginning for the girl group as they continuously prove that they are here to stay.  With every comeback EVERGLOW sets a new mark and Onda shared the process and what happened behind the scene of their last comeback ‘Last Melody’. “First of all, since the performance is really tough, we paid a lot of attention when we practiced the choreography. Also, it was very hard because physically we needed a lot of energy. However, as hard as it was, it was also fun to take on new challenges. Also, we really enjoyed and we are happy to keep on progressing in the area.”

The sextet has become synonymous with powerful performances and is well known for delivering hard-hitting songs with fierce choreographies and hooks that stay with you. Wielding the power of charisma and charm on stage, they own the ‘girl crush’ concept. The members discussed their current concept and the kind of concept that they would perhaps like to try in future as E:U confesses, “Honestly, EVERGLOW has shown strong and powerful performances till now, so in the future I want to show you more diverse sides of us.” Aisha shares that she really likes their current concept and adds on, “I wish that EVERGLOW becomes a top unique genre and I hope that we can show you a lot of different sides of us through our B-side tracks.” The members also shared about where they wish to see EVERGLOW in the next 5 years as Aisha continued, “After 5 years, I hope that we can become an artist that can give good influence to many people.” Adding on to Aisha’s point, E:U also expresses her wish, “I want to show you all a stage with songs that have a bright feeling or are a bit heavy.”

With catchy beats and powerful tracks, EVERGLOW made a comeback earlier in May with the title MV ‘First.’ This was also comparatively the most difficult choreography done by the group and they aced it, as usual. The group opened up about their first reactions when they first saw the choreography and also shared their thoughts on who among them is the fastest to learn the choreography. E:U reaffirms her previous statement as she shares, “I think EVERGLOW is a group that always shows powerful performances. To be honest, as soon as we received the draft/plan of the choreography I was really surprised. It was a choreography that required a combination of physical strength in a genre that we had never done before. So I was very worried but I was really happy that FOREVER liked it when it came out. Personally, I think I am slow at learning choreography and Aisha is really fast. I’m really jealous of her.” Yiren agrees to E:U and adds on, “Initially when we received the draft of the choreography, I was really shocked. How could they come up with such an awesome choreography! Will we be able to do as well as the draft? I worried a lot but fortunately while practicing, I realised that the choreography was definitely made for EVERGLOW so I don’t have any regrets.” But when it comes to choreography, Yiren has a different insight as she shares, “I think all the EVERGLOW members are usually fast in learning choreographies. If there is anything that is difficult, we tend to clear it up while practicing together.” With power packed performances, there is no doubt that EVERGLOW as a group, definitely owns every dance routine.

Although their next comeback plan is still a secret, Aisha shared how they spend their time on their off days and what has kept them motivated especially during this pandemic, “During our days off, rather than doing active work, I draw, watch movies or have a healing time at home!” 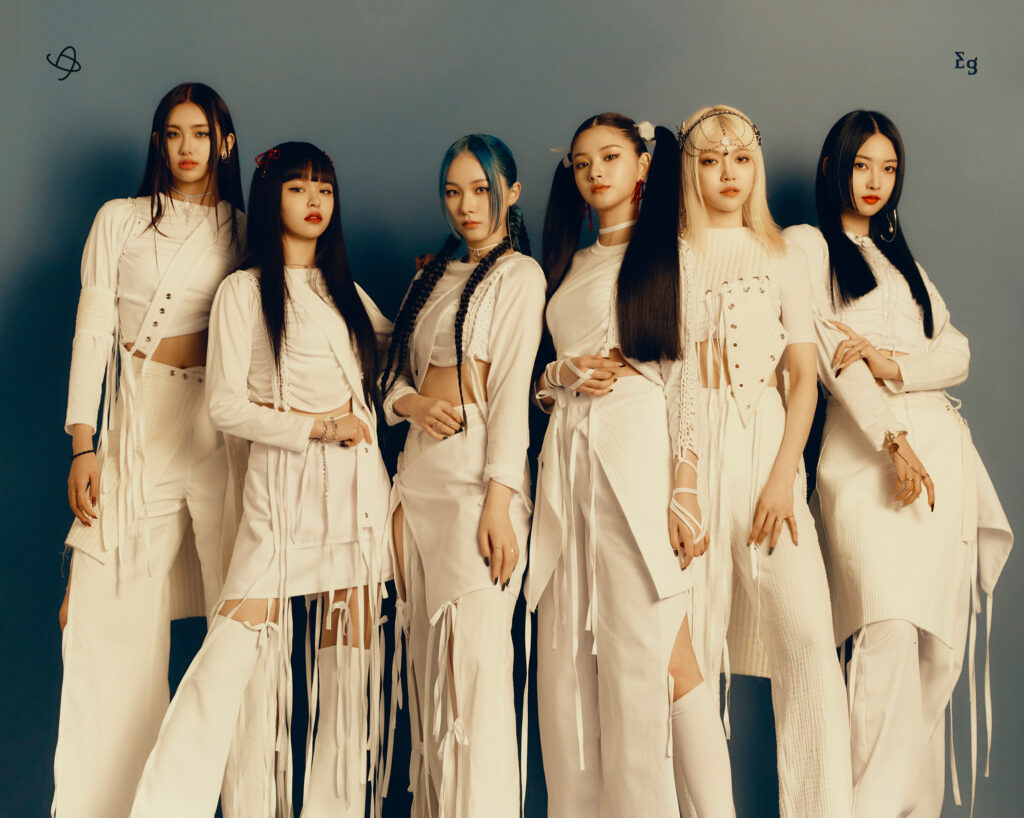 As we discussed about their transition from their trainee days to now, Mia expressed what she has learnt throughout the years and how she has evolved as an artist, “I try to learn ways to get used to things. I think words that can hurt one’s feelings are feedbacks and I learned how to make it mine because that’s how I will keep growing.”

Within two years in an industry that is fiercely growing, the girl group has managed to create quite a mark and have a fandom base all over the world. Fans also try to cover their songs and in India as well, there are a lot of ‘Forever’ who make sure that their presence and dominance is known even in cover contests. Sihyeon spoke about how it feels to get so much love and affection from all over the world, “You have all given us so much love that we are grateful beyond words. Rather than us expecting anything, I think we should continue showing and giving you all our improved and cool image.”

For a fan as well as an artist, the experience of an online concert is quite different to an offline concerts and although EVERGLOW would love to meet their fans in person they have moved to online concerts like KPOP Superfest and ‘THE FIRST’ to connect with their fans, Yire thus shared their experience and expressed her wish for the future , “Since ‘THE FIRST’ was our first concert, I was really nervous. However, thanks to the reaction and comments of FOREVER, I became relaxed while performing. I think we had a lot of fun creating our own happy space! I really want to do an offline concert with FOREVER. I want to sing and make our own memories together soon!”

The sextet has released quite a number of songs ever since their debut and to pick one song among all the tracks is quite a task but when we asked them to pick a song that the members relate to the most, Onda shared, “I think I can relate to D+1 the most because it is a song that best expresses the feelings of our first beginning, when we debuted. Whenever I listen to this song, I still remember the excitement of our debut.” She further adds that if she had to pick one song to introduce someone to EVERGLOW it would be DunDun; “I think a lot of people like this song and our unique performance with strong addictive points expresses EVERGLOW.”

When we look at the Google trends, there is no doubt that EVERGLOW is one of the most favorite 4th Gen K-Pop Group and in India as well, they have a very strong presence and hence, we wanted to know the first word that comes to Mia’s mind when she hears ‘India.’ Mia warms our heart as she shares, “When I hear the word ‘India’ I get the feeling of warmth. I don’t know why but it feels like everyone lives together in peace? That’s the feeling I get.”  As the interview reaches towards the end, the sextet sends a message to their ‘FOREVER’, “To our FOREVERs in India and to our FOREVERs all over the world, thank you all for cherishing and thinking about us a lot. We will also do our best so let’s be happy together forever.”

EVERGLOW emits powerful charisma and honestly, every concept seems to fit them well as their music not only portrays strong power and energy but also, great vocals and choreography. Although the sextet claim that their strength lies in their performance but on or off the stage, along with it, they also radiate confidence, power and the talent to excel. Seeing how they always deliver powerful performances, one can be assured that EVERGLOW’s next comeback is going to be strong, powerful and confident, just like them.

Want more? Do look forward to ‘Chai Time with EVERGLOW’, where the sextet answers some fun questions and more!