The New Summer Queens, 'Brave Girls' are back and they are 'Rollin' again into people's heart! Get to hear all about it in our exclusive interview!

Brave Girls debuted on April 8th 2011 with their single ‘The Difference’ and ever since then, they were seen performing at various music shows and they soon released their first mini album ‘Back to the Future’ on July 29th 2011. The music video of the title track ‘Easily’ was released on the same day which all started their history that’s known until today. Initially a 5 member group, the group went through multiple member changes and currently consists of Minyoung, Yujeong, Eunji, and Yuna, with no original members remaining in the lineup.

A historic moment in the Korean music industry was marked when their song, ‘Rollin’ which is a song released in 2017 topped the charts in 2021 and even set the record for perfect All Kills beating many new popular groups. It all began when a compilation video featuring Brave Girls song ‘Rollin’ started to gain lots of attention in Korea, so much so that in 2 days, the video has already garnered almost 1 Million views and currently has more than 22 Million views.

Netizens said it was a miracle how their popularity had suddenly skyrocketed in the matter of months that was never witnessed throughout their long journey in the industry, but we believe it’s something more than that, after all their music has always been great. Member Eunji explains how they felt about the sudden attention, “Initially we said amongst ourselves, ‘It might not last~ lets not anticipate too much’, but slowly the people who supported us kept increasing. And after we were called back to the music shows, the most memorable moment for me was when we first won No. 1 for it. I never thought that we’d be No. 1 that day. We are really grateful to our fans.”

Just few days before ‘Rollin’ began to take off, the group was talking about disbanding and what jobs they should be doing next, but the success of ‘Rollin’ not only brought them All Kills, it also made sure that the group stays together. The 4 member Brave Girls returned with a bang on June 7th, 2021 at 6 PM KST when they took twitter by storm by unveiling their teaser images for their latest comeback. Their schedule announcement followed right after and on 10th June, 2021 their 5th Mini Album Summer Queen’s track list was revealed. 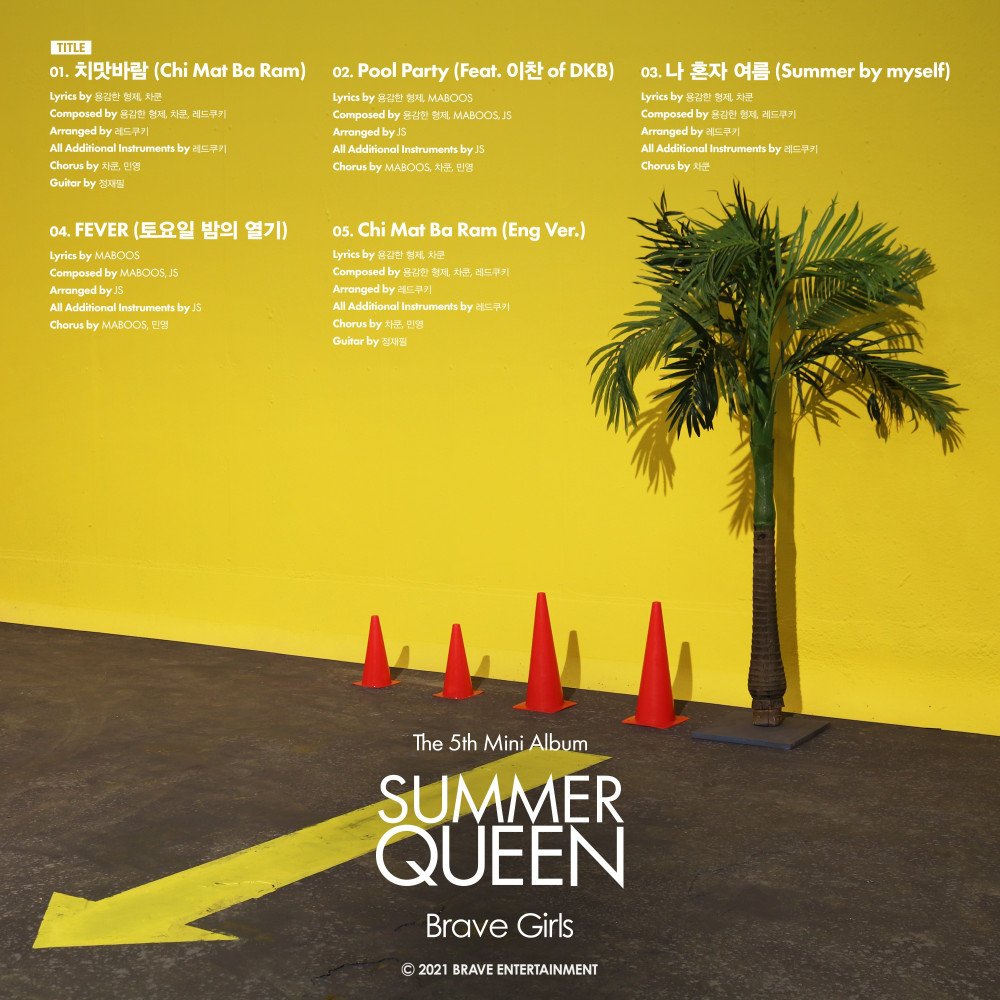 The title track ‘Chi Mat Ba Ram’ is an unusual title and Minyoung explains their reaction on what they thought when they first heard it, as she says, “When I first heard the title, I was a bit flustered. However it wasn’t a literal dictionary meaning and instead it meant Brave Girls’s new wind is blowing. We worked really hard on the song while we waited for the new wind to be created.”

For Brave Girls, this is their first comeback after they went viral earlier this year with their 2017 single ‘Rollin’ and there were a lot of expectations. With almost no schedules to multiple schedules at once, the members definitely faced the pressure to prepare for an album this fast while simultaneously promoting their viral track as well. While talking about the difference between their last comeback and this time, Minyoung shared, “This time, along with managing the schedule, we also prepared during our free time. After climbing up the charts, it was the first album that we made, so there was a pressure to show you all a perfect side of us.” She further added, “As lot of people were anticipating our summer album, it motivated us and so, we really worked hard preparing for it.”

With the sound of Saxophone in the first verse and the sweet vocals, one can easily say that Chi Mat Ba Ram is perfect for summer with its summery energy, tropical beats, addictive hooks and has Brave Sound written all over it. With this comeback, the pressure was on and the girls made sure they delivered.  When asked to compare ‘Rollin’ to ‘Chi Mat Ba Ram’, Yoojeong shares that, ‘Rollin’ is a song that climbed up the charts and ‘Chi Mat Ba Ram’ is a song that you would want to binge listen to. She also picked her favourite song from the album ‘Summer Queen’, “I like the song FEVER. It’s the first song where I challenged myself with rap and I feel like the mood of the song really matches the summer nights. I hope everyone listens to it often.”

Brave Girls have been through everything that the industry had to offer. They bagged various awards like Rookie of the Year at the 19th Korea Culture Entertainment Awards in 2011 and Popular Singer award at the 2021, 9th Korea Arts & Culture Awards. After charting on various positions on numerous music charts, multiple member changes, having a period of time where they even spoke about disbanding, bouncing back again and creating history, Brave Girls have experienced both sides of an Idol world and fans have seen it all along.  The members collectively agree that the reason why the group was able to overcome all hurdles was because of each other. Minyoung shares that the thing that keeps the spirit of Brave Girls alive is not them but their family, company staffs and fans who had faith in them that they would do well. Yuna further adds, “Whenever I have a hard time, my eonnis (other members) comfort me a lot. Whenever they tell me, ‘Yuna, we’re here’ it becomes a big source of comfort for me and I feel reassured. We rely on each other and whenever we have a hard time, we pull each other back up so I think we are able to maintain it because of that.” Eunji also adds on to it as she says, “I think the support and trust from family is a big source of strength.”

It has been 10 years since their debut and the group has been part of the older generation K-POP groups and now, they are competing with the newer generation as well. Yuna shares her insights on the advantages of being a group with many years of experiences,  “First of all, since we have a lot of experience, I think a more confident image comes out. Also since the members have stayed together for a long time, there is nothing we don’t know about each other so it’s natural when we are together. Whenever we do shows, I think a comfortable side of us is shown and the fans also like this side of us more.” For Bravegirls, this is only the beginning as  Minyoung shares their vision on where Brave Girls would be in future, “5 years later, after Covid-19 settles down, ‘I wish I could perform as much as I want in front of the fans’ is what I think often.”

Brave Girls then sends a message to their Indian Fearless, “To our all our Fearless in India~ We are really grateful that you support us and love our songs. When Covid-19 settles down, let us meet for sure~~”

Get to know more about them in our ‘Chai Time with Brave Girls’ segment!

For Brave Girls, Music is the one that connects them and Fearless. Yuna further adds that the favourite words to motivate herself is FEAR.LESS and when asked to describe ‘Brave Girls’, Yujeong uses the words, ‘Courage, Friendly’ and rightly so. The girls may have achieved so much unexpectedly in a very short time but this was long deserved. ‘Rollin’ may have been a late realisation for the fans but ‘Chi Mat Ba Ram’ isn’t. With their comeback charting, multiple wins at music shows and their MV hitting 33 Million views plus counting, they have already proved once again their talent and Brave Girls are truly the ‘Summer Queens.’