The members are gearing up their eventful year ahead!

BLACKPINK has announced dates for their world tour!

On August 9, KST, the girl group released official details for the first batch of their “BORN PINK” world tour. The tour will start in Seoul on October 15 and 16, after which they will head to North America for 10 shows.

For November end and December, BLACKPINK will tour in Europe in six cities. In 2023 between January and March, they will visit the Middle East and Asia. The next summer they will tour Australia and New Zealand. 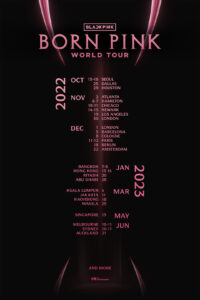 That is not all. BLACKPINK has promised more dates!

The much awaited anticipated world tour will commence after the release for their new album “BORN PINK” in September. A pre-release track named “PINK VENOM” is slated for release on August 19.

Are you excited? Let us know in the comments!