A fan had commissioned the billboard to celebrate the singer’s birthday but it was unfortunately removed hours later.

The year is 2021 and if you haven’t heard of BTS yet, you are probably living under a rock considering how the Bangtan Boys regularly hit the headlines for some reason or the other.

BTS, is undoubtedly the global phenomena and has a dedicated fanbase called ARMY. The amount of love and respect BTS and ARMYS have towards each other is commendable. 1st September is an important date for the BTS army as it is the birthday of the youngest member, Jungkook. Fans around the world prepare numerous events and projects and go an extra mile to celebrate his birthday and wish him all the love, luck and success.

Like every year, this year too, Pakistani ARMYs decided to pour their love and shower extra efforts and celebrated their beloved idol Jungkook’s birthday by putting up a billboard at GT Road, near Sheranwala Bagh in Gujranwala (Pakistan) which was shared by various profiles.

The billboard bore a picture of Jungkook along with the phrases “Happy 24th Birthday”, “Jungkook BTS Gujranwala Army” and with the name of an army. This billboard brought about a lot of attention among the Pakistani BTS Army and rest as well. 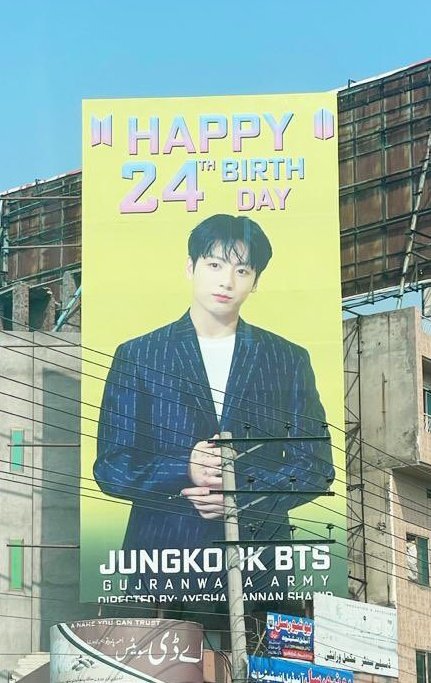 Where the fans were overjoyed with the growing popularity and recognition of their favorite group, BTS, it only lasted few hours as the billboard was removed after claims rose that the ad was promoting homosexuality. 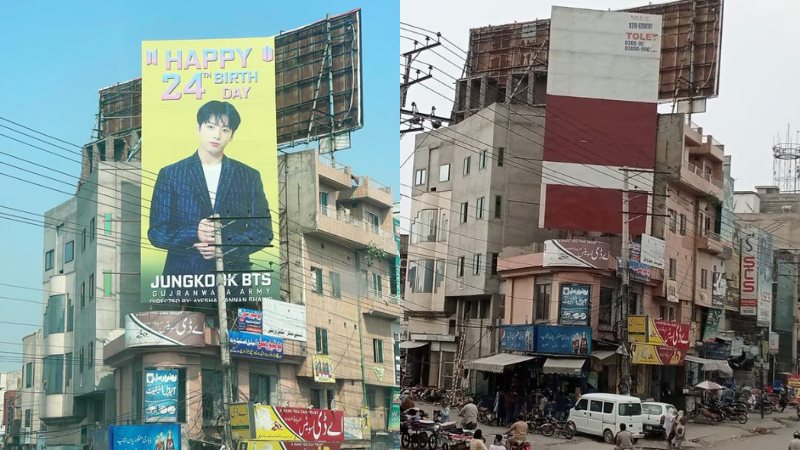 According to sources, this didn’t go well with the community and Furqaan Aziz Butt from Jamaat -e – Islaam. Younus Mughal, the advertiser owner stated that a person from Lahore had asked to put up this billboard for BTS Jungkook’s birthday for 2 days and had paid approx. INR 100000 for the same, but it was taken down within few hours under the order of Punjab Assembly candidate of Jamaat-e-Islaam Furqaan Aziz Butt, which left Younus Mughal shocked as to why was he asked to do the same.

A report published in Vice said Furqan Aziz Butt received a “lot of complaints from people” about the ad on his Facebook. He said the Korean band had a harmful influence on the youth of Gujranwala and promoted ‘homosexuality’. “There are young people in this city. This group (BTS) has a negative influence on them and encourages them to behave in wrong activities. They promote homosexuality,” Butt grumbled while defending the removal of Jungkook’s poster. He further added,  “Why was this put up here? They don’t have a brand name here nor do they sell products here. The people who put it up call themselves the Gujranwala army. There’s only the Pakistan army here.”

Fans took to twitter to show their disappointment at the removal of the billboard and comments made by Butt, and began to trend hashtags like “#PakBTSARMYsAreStrong” and “#PakistanLovesBTS”.

the billboard in pakistan of jungkook for his 24th bday was just removed by force by a political party for 'promoting homosexuality' this makes me so sick. The girl who paid for the billboard has to pay for putting it up ??? + pic.twitter.com/oXv5CGIcD7

It maybe mentioned that this is not the first time a billboard ad has been put up in Pakistan by BTS fans. Earlier in March, Pakistani BTS Army celebrated Suga’s birthday with an LED ad as well.

Here’s our LED ad for celebrating our Yoongi’s 28th birthday!
Islamabad and Rawalpindi ARMYs can go and see it at Ammar Chowk, Rawalpindi today!
The ad will be up until 12am at night..

Credits for the ad: @_diorsguk (Instagram)
HAPPY YOONGI DAY TO YOU ALL pic.twitter.com/oH4ksXPsbX

Thus, this is not a new thing yet and the sudden comment and the removal of the billboard did not sit well with the fans. Some Army also began to use these hashtags to shine light on the various charity drives that have been organised by Pakistani BTS fans in the past years.

Though Pakistan is a majorly an Islamic state, it has a growing audience for all kind of content, few of the best shows, films and specially music comes from Pakistan. It may be mentioned that BTS enjoys a very strong popularity in Pakistan as they are one of the most streamed artist.

Although it is unfortunate that Jungkook’s Birthday billboard was taken off in Pakistan, ARMYS across the globe as always united and put in their extra effort to make that day memorable and celebrated Jungkook’s birthday to the fullest, be it India or Pakistan or elsewhere.

BTS has always spread the message of self-love, humanity and respect through their music and various platforms. Likewise, their fans ensure that they carry on the message as well. In other news, BTS recently entered the Guinness World Records 2022 Hall of Fame with 23 records! Their record breaking hit song ‘Butter’ now has a remix version featuring Megan Thee Stallion. Fan or not, BTS is here to stay and the bond that they share with their fandom will always be special.