For K-POP and K-Drama fans, fandom projects, especially to mark an artist’s birthday or debut anniversary, are customary. Indian fans of K-idols and K-actors have been stepping up over the years and they are not far behind as we see fans from all over the country coming together as one, despite the geographical and language barriers, to celebrate their favourite artists’ birthday in the most meaningful way possible.

For Jungkook’s 24th birthday on 1st September, ARMYs from all around the world celebrated the special day through various birthday projects, fundraisers, and events. Indian ARMYs made sure they weren’t far behind and went all out to celebrate his birthday in a grand style.

Indian ARMYs rent a billboard in different parts of the country

The first birthday project included posters of Jungkook at a bus stop located in PK Road, Mulund, Mumbai. These posters not only wished him Happy Birthday but also highlighted his versatility as an idol. It included QR codes to four of his songs, ‘Euphoria’, ‘Still With You’, ‘Begin’, and ‘My Time’. This project garnered a lot of attention for being the first of its kind in the country because Indian fans usually sent gifts, trend hashtags, or set up fundraisers on their idols’ birthdays.

Fans also spotted a few other billboards in Delhi, Sonipat, Aizwal, and Indore.

September brings one the best gift to ARMY.
JK's birthday poster at the biggest mall in Aizawl,Mizoram,India.#ARMY #mizo_army#JungkookBirthday pic.twitter.com/q5IVKWF2HT

One of my army friend arranged it 🐾🥀🍀💜😭
location – indore (mp) pic.twitter.com/RHVmataEx2

Nishita** this is in North campus, near DSE, they apparently put hoardings in indore and sonipat also (below) pic.twitter.com/Wegr0yiBpi

Fans undertake three fan projects to donate to a good cause

In addition to the Billboard in Mulund, the admins of Jungkook India on Twitter hosted three other fan projects. For part two of the project, fans sponsored three abandoned dogs under Jungkook’s name. This part of the project was dedicated to his dog, Geureum. Money was raised and donated to Sightsavers to support four sight-restoring surgeries. For the fourth part of the project, Happiness Kits were donated for twelve children through Akshaya Patra. These kits include nutritious food items, hygiene products, stationery items, and immunity boosters. Check out more details of the other project below.

In honor of Jungkook’s upcoming birthday, we are sponsored three abondoned dogs in India under Jungkook's name. pic.twitter.com/rlz5ANPsrQ

For Jungkook's birthday, we have donated to sightsavers to support 4 sight restoring surgeries in India under Jungkook's name pic.twitter.com/AxHLyr5mT1

Event on Jungkook’s Birthday in Navi Mumbai and Mira Road 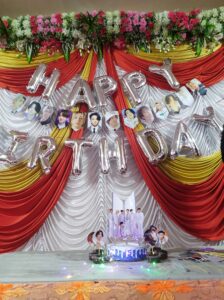 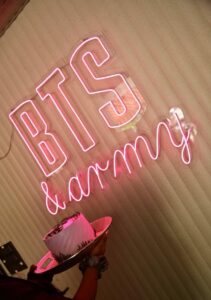 ARMYs set up a fundraiser to mark Jungkook, Namjoon, and Jimin’s birthdays

Meanwhile, a BTS Fanbase in India, ‘Bangtan India’, is raising funds for Project MI CASA in support of Habitat For Humanity’s Disaster Risk Reduction and Response program. The fundraiser began on 24th August and will end on 10th October. This fundraiser aims to gather resources and funds for people affected by Natural Disasters.

It is heartwarming to see thoughtful deeds like fundraisers and donations hosted by fandoms. If you are an ARMY and wish to donate to Project MI CASA, you can reach out to them. The list doesn’t end here and there are many other fans who have celebrated the golden maknaes birthday in their own way. The BTS star also made sure to celebrate his birthday with his fans as he began his birthday celebrations by creating a song out of the birthday notes sent by the fans him prior to his birthday when he asked his fans to send birthday notes to him in the form of lyrics. He also made sure he gave a mini concert for his fans. The bond of BTS and their fandom is truly amazing!

In our YOUR STAGE segment we cover everything from charity works, donations, and fundraising events organized by Hallyu fans, to your performances, fandom achievements, artworks, and more!  Want to be a part of ‘Your Stage’? Send us your/fandom stories and achievements to admin@namastehallyu.com with ‘Your Stage’ as the subject line.

A.C.E Are The “CHANGER” In Their Latest Comeback