Here's everything that went down at TREASURE's first-ever private stage which engaged both online and offline fans!

The global rising K-POP group, TREASURE had its first-ever private stage TEU-DAY on the 2nd of October to celebrate the act’s first year.

Being the first-ever fan event, it was obvious that both TREASURE and TEUME were greatly anticipating this day to come. Though the stage was geographically limited to Korean TEUME, Venewlive streaming platform helped the international fans experience the stage live from South Korea and we got to watch the concert as well. As this is the group’s first-ever live performance before fans since their debut, it made ‘TEU-DAY’ even more special. As expected, the group and fans shared an auspicious time together and left-back with great contentment.

Bonding with the Members

The event began as the members made their entrance from backstage in school uniforms with huge smiles and excitement while singing, ‘Going Crazy,’ the song that marked the beginning. The snippet of the song automatically pulled us back to the days of Treasure Box and made us realise how far we have come. After the short performance, the members started introducing themselves while commenting on how grateful they are to finally be able to perform before their fans. Following the introduction, the members settled on their respective seats and made individual pledges while taking up different roles in treasuring and protecting their beloved TEUME.

Despite a year of being TREASURE, the members and fans experienced their first-ever 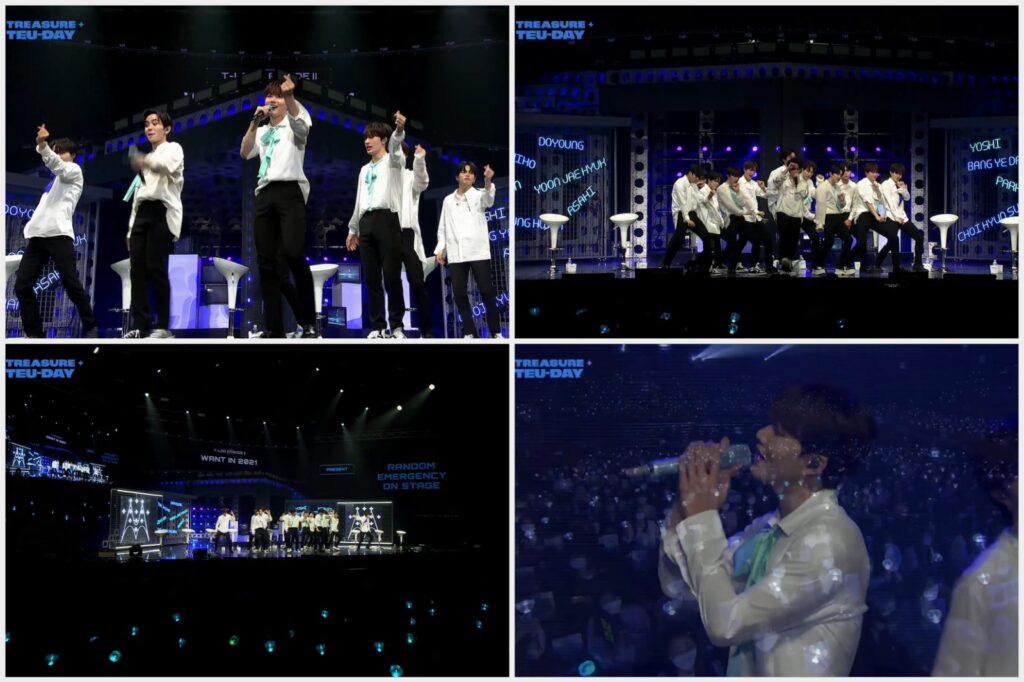 Sticking to the promise, the members continued to delight fans with back to back performances and games. The members kick-started their performance with their iconic single, ‘I Love You’ still in their uniforms making the experience surreal to every individual who was watching. The energy and enthusiasm during the performance emitted the sincere joy of the members. The act continued with ‘My Treasure,’ their latest single and a comforting track that every TEUME holds close to their hearts. Fans got to participate along with the members hyping them with their new fan chants.

After a zestful performance, a pre-recorded VCR engaged the audience while the members got changed to their second outfits. The VCR was more of a teaser to their upcoming comeback and concepts as the videos were categorised in parts revealing 7 new chapters with different mottos.

CHAPTER 1 RENAITRÉ: TO BE REVIVE

CHAPTER 4 DONNER: TO GIVE

CHAPTER 7 VOUS: YOU ARE

The video ended with the title RENDEZVOUS which means meeting at an agreed time and place. In the context of the group, it can mean the agreement between TREASURE and TEUME to meet each other at an agreed place and time. After a sneak peek into the act’s upcoming theories, the members got back on stage with an ethereal look in silky white shirts, black pants and ribbons to sing ‘Slow Motion.’ “A big jump towards the front/ Look at this, you can trust me/ Slower, more slower, slower,” goes the lyrics as the soothing melody is one of the songs TEUME have been eagerly waiting to be performed live. The bristling energy settled down for the artists and fans to connect through the lyrics.

TREASURE was quite taken aback with a surprise video of a number of fans singing ‘Slow Motion’ in unison. The video quickly moved the group to tears and still in disbelief, the members thanked their fans. The sweet interaction was definitely one of the best segments of the stage for both members and fans alike.

The next segment T-LOG was about looking back at some of the most memorable days from the past. The group reminisce their journey as TREASURE by looking at some of their firsts. The set of pictures included their first debut photo, Inkigayo debut stage and their appearance in Asian Artist Awards and Mnet Asian Music Awards. Looking back at the pictures, the members couldn’t stop expressing their gratitude for how far they have come while sharing some of their favourite memories during the events. After a reflective session, the group entertained the audience by playing games. The members had two missions to complete – a memory test and a dance challenge with two mics. The group was asked to greet and confess ‘I Love You’ in different languages to which Mashiho delighted the Indian fans by greeting “Namaste.” The sportive and lively energy of the members instantly reminded us of the days of Treasure Map.

On to the future, the members’ final activity was to film a video message to the future addressing one of their fellow members. The segment was another heart-warming experience as the members fondly addressed one another and thanked them for being part of TREASURE. The sweet sharing session came to an end with a banger with members getting back to their performances. The dozen performed ‘BOY,’ the song that marked the beginning of their journey and with high energy, the act showcased their charismatic flower boy energy. The boys didn’t go easy on the fans and decided to surprise them with a mega performance of ‘MMM (Rock version).’ The track itself is a banger and with flashy red lights and intense choreography, the act became a gang of heart-throbbers elevating the visual experience.

With the event coming to the end, the members clicked pictures along with the fans and shared their sincere gratitude. Though the international fans’ experiences were limited to the screen, the members made sure to make them feel involved by giving regular shout-outs and also assured to meet them in person sooner. And, yes, these little gestures of love and some close-up shots of members made online fans experience the stage on a more personal level. Feeling hard to say goodbye, the act performed their recent single ‘Everyday’ as the finale of the stage. The members in huge smiles and teary eyes finally bid their goodbyes and gave an unexpected tease for their comeback.

In a solid 2 hours stage, the act wrapped their one year journey with their performances and mini segments. The stage is indeed a showcase of how the members are talented and passionate in what they do and is only the beginning of what lies ahead. TEU-DAY has definitely been a dream for both TREASURE and TEUME and would always remain special.