Review: The Great Shaman Ga Doo Shim Is A Must-Watch

If you haven't watched this drama yet, you need to add this in your watchlist!

‘The Great Shaman Ga Doo Shim’ (우수무당 가두심) or also known as ‘Shaman Girl Ga Doo Shim’ is an original fantasy mystery series on Kakao TV starring Kim Sae Ron and Nam Da Reum. The series was broadcast from July 30 to October 8, 2021, and each episode was of 20 minutes. 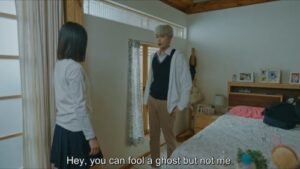 The story is a fantasy mystery romance about two high school students who become embroiled in a sequence of dramatic occurrences. Ga Doo Shim (Kim Sae Ron), an 18-year-old who wishes to live a regular life, is born with the unfavourable fate of becoming a shaman. Her grandmother, who is also a shaman, informs Doo Shim that if she survives until she was 18, she will be able to live a regular life. Doo Shim is a bold and powerful character who will fight evil spirits while investigating unusual incidents. She is sent to a school where the lowest-ranking student committed suicide by jumping from the school’s building.
In her new school, Doo Shim meets Na Woo Soo (Nam Da Reum), a perfect high school student with an affluent upbringing, attractive appearance, and excellent grades. When Doo Shim arrives out of nowhere, he acquires the power to see evil spirits, and the two become engaged in a series of mysterious cases. The duo goes on a journey to overcome the evil spirit who is responsible for the mysterious happenings of the school. 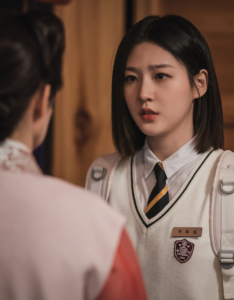 A teenager with the capacity to sense ghosts. Her grandma died while attempting to capture an evil spirit that rendered her cold and insensitive to spirits. She develops feelings for Woo Soo while working with him to exorcise the evil ghost. 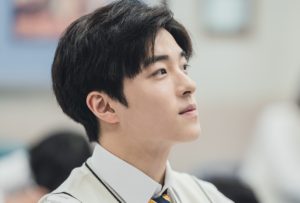 Doo Shim’s classmate and the best student in the class. He comes from a wealthy family. After a minor incident, he can see ghosts, falls in love with Doo-shim, and aids in the rescue of his friend Kim Il-Nam from an evil spirit. 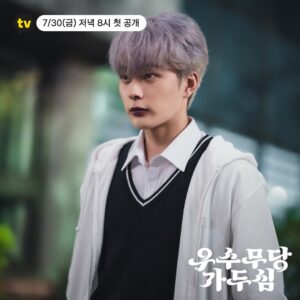 A good-willed student who died and became a spirit. He has been waiting to meet his mother and frequently bothers Doo Shim while assisting her in the battle against the evil spirit. 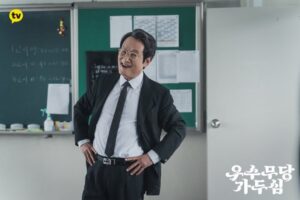 Doo Shim and Woo Soo’s principal at the school where they study. He has a dark secret. He is the one who wants students to study hard without having fun by murdering the lowest-ranking exam student to terrify them into studying hard.

Why should you watch this?

This drama is recommended if you enjoy a blend of youthful love and mystery. The story touches on all types of genres such as mystery, horror, love, and friendship. Kim Sae Ron and Nam Da- Reum’s chemistry is very strong and realistic and viewers will really be pleased with the pairing. With a youthful cast, strong chemistry and good pot, the drama is a must-watch.