As the Online Round ends, the Regionals commence!

With the increasing enthusiasm and talent, k-pop fans in the country took part in the K-POP India contents 2022 organized by Korean Culture Center India.

Ever since its beginning in the year 2013, the contest has gained popularity among the nation as people with interest in K-pop, whether it be Vocal or Dance, have participated to show their skills and talent. It was the same this year too, the first round of the contest also known as the Online Round commenced on 4th of April and ended on 28th of April.

The regions participating in the contest are as follows: 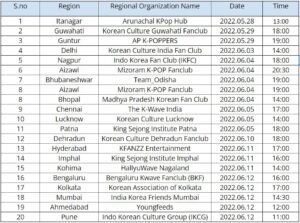 So far the results for Itanagar, Guwahati, Guntur, Delhi, Bhopal, Chennai, Dehradun, Mumbai, Ahmedabad and Pune have been announced on their Instagram channel, as for the rest they shall be announced soon.

Along with the end of the Online Round, the contest now proceeds to the Regional Rounds, where the qualified participants will be competing with the winners from their respective regions. There are in all 20 regions participating in the contest and the dates for the next round have already been announced.

The next round would be broadcasted live on the KCCI’s official YouTube channel. KCCI has also instructed all participants to make sure that they follow the rules of the respective states with respect to the COVID-19 situation.

For the detailed rules and regulations, the participants can refer to their respective regional organizers.

Namaste Hallyu congratulates all the winners and wishes all the best to them for the Regional Rounds.