The final round is just around the corner!

Hosted by the Korean Cultural Center India and was organized by the Korean Culture Fan Community of Guwahati, Assam, the event was held on October 22. This is the first time that a regional round of the K-Pop India Contest is held in Guwahati. To promote the essence of Hallyu, the event was accompanied by various small contests like Essay Competition, Art Competition, Journaling Competitions, and a few giveaways which helped to reach out to the audience in the state. 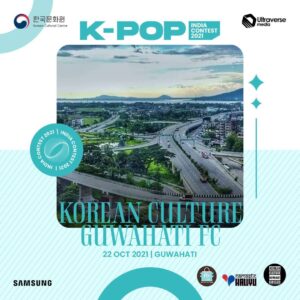 Due to the pandemic, all the regional rounds were live-streamed on the Korean Cultural Center India’s Official YouTube Channel. The event was divided into two Categories Vocal and Dance. Among thousands of contestants in the online round, 20 participants were selected for the Guwahati Regionals. 10 participants were qualified for the Vocal category, and 8 individuals and 2 teams were qualified for the Dance category.

The organizers of the Guwahati regional round also surprised participants by announcing an exclusive award – ‘The Popularity Award.’ The most popular participants of each category were awarded based on the audience’s vote in the live chat section during the premier and the number of likes on the official Instagram account of the Korean Culture Guwahati Fan Club.

For the official event, the contestants were evaluated by a panel of judges based on various criteria.

Regional Round Selection Criteria for Vocal:

Regional Round Selection Criteria for Dance:

1st Place: HOT ISSUE: It was not the first time that HOT ISSUE made it to the finals. Established in 2016, the group consists of 5 members who have been interested in dancing and performing since they were kids and brought together by their love for Hallyu and dance. The girl group have been an active participant of the event since 2016 and their first win was in K-Pop India Contest 2017, Assam regional round. They went ahead for the finale and were the second runner-ups in the K-Pop India Contest 2017 Finale. Their second win was K-Pop India Contest 2018, Manipur Regional Round.  They are a bit anxious, but also happy that they made it to the final this year and they stated they will work very hard for it. HOT ISSUE will be competing in the final round of the contest and they seem to be excited to give their best. 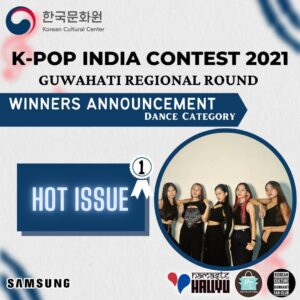 1st Place: Shraddha Sinha: This isn’t the first time that Shraddha has participated in the K-Pop India Contest. However, her constant dedication has enabled her to grab the win for the Guwahati regionals. Shraddha’s Hallyu journey was an accidental find when she watched PSY’s Gangnam Style on TV when she was a teenager. She was immediately hooked to the colourful visuals and soon discovered her ultimate bias groups, Big Bang and EXO. She’s a little nervous about the finale but she said she will challenge herself and is looking forward to it. 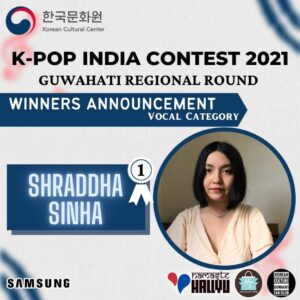 HOT ISSUE and Shraddha Sinha will be representing the Guwahati region in the finals along with the representatives and winners from the 19 other regions. The final round will be held on November 27, 5 PM IST, and will be live-streamed on the Korean Cultural Centre India’s YouTube channel. The winner in each category will get a chance to go on a free trip to Korea.

Team NH congratulates every contestant, for they all are the winners and wishes all the best for the contestants competing in the finals.

Mark Tuan Dives Into His Emotions With 'Last Breath'