Indian Minoz spare no effort and continue to strive to show their love and support. This time they took a step ahead and sent Lee Min Ho's name to the Red planet via a NASA Mission

South Korean Actor Lee Min-ho who became the cover model of the Esquire September issue recently had an interview with Esquire Korea in which he answered questions asked by his fans.

Among many of these questions, one includes, ‘Where do you want to live other than Korea?’ Replying to the question, the actor answered “Mars”, leading to the interviewers asking in a joking manner. “With whom…Elon Musk?” Although it may sound like a joke, it was not so for the Minoz in India. When they heard his wish, Lee Min Ho Lovers India could not stop themselves from trying to make it true, so they did. Recently NASA’s Mars Exploration Program launched an event in which they would be etching the names of the participants onto a microchip attached to a satellite en route to Mars. This enabled Minoz’s in India to send the name of the actor far across space to Mars. They shared this on their official fan club page on Instagram along with the photo of a boarding space flight ticket. 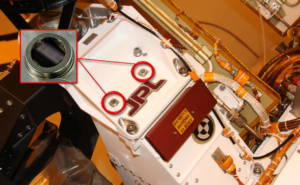 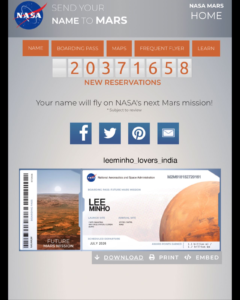 This isn’t the first time the Indian Minoz’s have displayed their affection, love, and loyalty towards the actor. From sending Coffee Truck to arranging a banner on behalf of the fandom at the press conference of his drama ‘Legend of the Blue Sea’, Plantation Project for his 32nd birthday and even adopting a Giant Panda as a gift for the actor’s comeback from the military.

If this does not surprise you, then this surely will. The Minoz India fandom gifted a star to the actor named ‘LeeMinHo’. This led to the actor and his agency noticing the fandom and finally acknowledging them.

The actor even included the Hindi quotes in his Promiz (Lee Min Ho’s charity organization) video and sent them his autograph signing with a special message saying ‘Always Be Happy’. 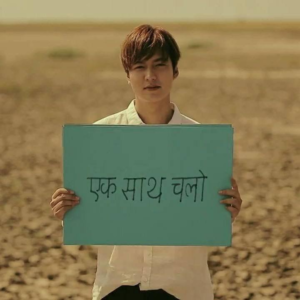 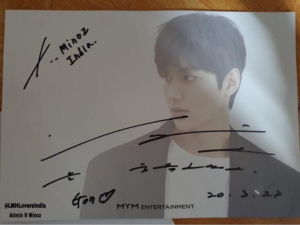 Rajita from Andhra Pradesh started this fan club on 2nd September 2011. This year marks the 10th anniversary of the fan club. The fan mentioned that everyone is anticipating the actor’s visit to India. They also added that they wanted to fulfill the wish of Lee Minho and prove the fact that distance does not matter, as long as love exists!