Choa’s New Single Album To Be Released This April

Choa is back and has joined the April lineup!

Soloist Choa is gearing up for a new comeback!

On March 31, her agency, Great M Entertainment announced her return through a teaser image that reveals the D-Day and time. The new album is her first one under Great M. Entertainment. 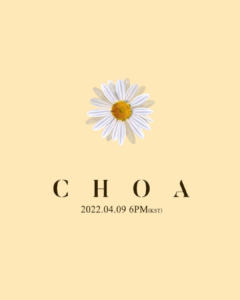 The teaser image is warm coloured and fans are expecting a mellow and sweet themed album. Further, the daisy in the picture has increased curiosity about Choa’s concept for this comeback, as it’s title is yet to be revealed. But the agency did announce that the filming of the MV is completed.

Choa debuted as a member of girl group AOA in 2012 and sub-unit ‘AOA Black’ in 2013. She has also participated in singing various OSTs for dramas, with her most recent being ‘Thorn’ for the K-Drama ‘Lovestruck In The City.’

Are you looking forward to the drop of her album? Let us know!

THE BOYZ Have Announced World Tour For 2022