by Ranjini
in K-POP, News
0

Kim Taehyung aka V from BTS adds another ‘FIRST AND ONLY’ record to his vast list of accomplishments.

V’s solo OST ‘Christmas Tree,’ for the K-Drama ‘Our Beloved Summer’ which was released four months ago, has topped 100 million streams on Spotify, one of the world’s major music streaming sites and it has since smashed numerous domestic and international music records. 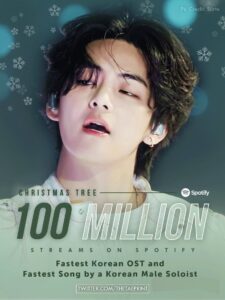 Music director Nam Hyeseung, who penned ‘Christmas Tree,’ with V in mind from the beginning, also expressed her joy at the achievement on her Instagram account.

The song is also V’s second OST to surpass 100 million streams, following ‘Sweet Night,’ making him the second Korean male act after BTS to reach the feat with multiple OSTs.

Furthermore, V is the first and only K-Pop idol to have five solo songs surpassing 100 million streams, including his BTS hits ‘Singularity,’ ‘Stigma,’ and ‘Inner Child.’

Wishing the artists a hearty congratulations.

Check out ‘Christmas Tree’ MV below.