BTS  will attend a meeting in the White House with President Joe Biden to discuss anti-Asian hate crimes and to commemorate Asian American and Native Hawaiian/Pacific Islander Heritage Month.

Biden has returned from his first trip to Asia as president, which included a three-day stay in Seoul and discussions with newly-elected South Korean President Yoon Suk Yeol. 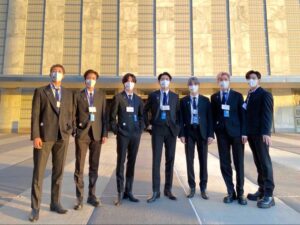 According to the White House, the group will briefly discuss Asian inclusion and representation, as well as anti-Asian hate crimes and prejudice, which have been on the rise. The press release has stated that,

“President Biden and BTS will also discuss the importance of diversity and inclusion and BTS’ platform as youth ambassadors who spread a message of hope and positivity across the globe.” 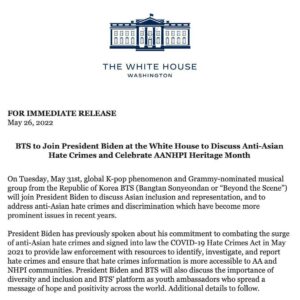 During the COVID-19 outbreak, there has been an increase in anti-Asian crime and animosity toward Asian Americans and Pacific Islanders (AAPI). Between March 19, 2020, and December 31, 2021, more than 10,000 hate incidents against AAPI people were reported to the advocacy group Stop AAPI Hate. During the wave of anti-Asian hate crimes in the United States last year, including shootings at three Atlanta-area spas, BTS came out about their mistreatment. They stated,

“We recall moments when we faced discrimination as Asians. We have endured expletives without reason and were mocked for the way we look. We were even asked why Asians spoke in English,”

“We cannot put into words the pain of becoming the subject of hatred and violence for such a reason.”

A confessed K-POP fan, President Biden had earlier stated that ‘K-pop fans are universal,’ in a meeting with the former South Korean President Moon Jae-In at the White House in May 2021. 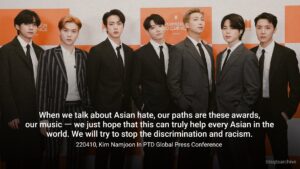 The White House has reported that Biden and BTS will also address the significance of diversity and inclusion, as well as BTS’ platform as young ambassadors who carry a message of hope and optimism throughout the world.

🚨 NEW: On Tuesday, May 31st, global K-pop phenomenon and Grammy-nominated musical group from the Republic of Korea BTS (Bangtan Sonyeondan or “Beyond the Scene”) will join @POTUS at the White House to discuss anti-Asian hate crimes and celebrate AA and NHPI Heritage Month.

BTS leader Kim Namjoon aka RM has shared a heartfelt letter with the ARMY on Weverse regarding this news.

“So it happened.
Many interesting things happen in my life
Since I’m going for a good cause, I’ll go and come back well.
Last time, during my trip to the US, I looked at it from afar, hmm now I get to go inside of It’s not always but I know, hear, and see all the messages you tell us so I wanted to tell you don’t worry too much
Whatever that might be about…
I’ll go and come back well and see you in June with a smile.”

This letter made ARMYS extremely excited and proud of the group’s appearance in the special place.

BTS is scheduled to pay a visit to the White House on Tuesday, May 31 KST.