by Ranjini
in Featured, K-POP, News
0

BTS will be going on hiatus after nearly a decade as one of the most popular and well-known groups on the planet, with the seven members working on separate projects shortly.

On June 14 KST, the group announced in a special pre-recorded video that was released as part of FESTA, an annual event celebrating the group’s 9th anniversary. In the video, they talked about their whole journey and shared emotional moments with the Army. In the end, they thanked the fans wholeheartedly by stating,

“We’re each going to take some time to have fun and experience lots of things, We promise we will return someday, even more, mature than we are now.”

Each member discussed their solo debut plans. J-Hope and Suga, who have both produced solo mixtapes in the past, are expected to make solo albums. J-Hope is the first member of BTS to undertake full-fledged solo promotions and is expected to release his first official solo album sometime in mid-July. Jungkook also revealed that he plans to release a solo album. 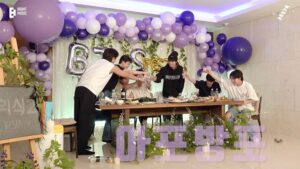 “BTS will start a new chapter that combines team and individual activities. It will be a time for each member to grow through various activities, and BTS will become a long-running team in the future. We expect that it will become a source of nourishment for us. For this, we will actively support at the label level.”

BigHit Music also stated that BTS plans to announce ‘Chapter 2’ through the release of solo albums and collaborations with various artists. Their activities will be revealed soon, and the 1st will be J-Hope.

While the group didn’t note how long the break will last, they expressed their desire to explore solo projects. They heartfully thanked the fans for being with them throughout and promised that they will return soon with something special. Member V shared a heart-felt letter for fans on Weverse after the announcement,

“We are happy
the things that the seven of us like, and dislike, our personalities, tendencies and tempos/paces are all different but because our one thought of ARMYs are the same, we had to continue Run! BTS.

For 10 years, we continued going forward while always looking upwards. we were scared and had to give up ourselves for the team and there were countless exhaustion and hardships that always came after the happiness within it.”

now is the beginning of our healthy footsteps that is an effort to stay as bangtan for a long time so I believe that ARMYs will love that side < of us > as well.

ARMY and bangtan are connected by a purple string so look at us for a long long time so that the string doesn’t break and that the colour’s richness lasts a long time.

we love ARMYs a lot.

We wish them the very best for their solo venture!

Check out the FESTA video here.

Seo In Guk Unveils A Sentimental Music Video For ‘My Love’