12 Korean artists to set the stage on fire!

2022 K-Pop Masterz has announced its lineup for concerts in Manila, Philippines and Bangkok, Thailand!

This music festival is scheduled on July 29 in Manila, at SM Mos Arena. PULP unveiled the current lineup that includes YG Entertainment’s boy group TREASURE, Bam Bam and Jackson Wang from GOT7 who are also pursuing solo careers. 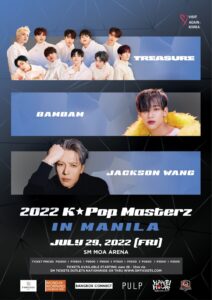 2022 K-Pop Masterz festival will also be held on 31 July in Bangkok, Thailand, at Impact Exhibition Hall. Pamee249 announced that TREASURE has been confirmed as part of the lineup. 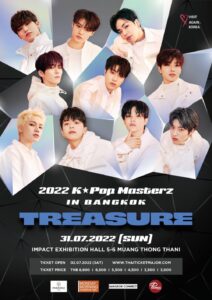 Both Pamee249 and PULP released teaser videos in which they mention that 12 K-Pop idols will be part of their respective lineup.

Eager to know more? Stay tuned with us for more details!

KARD Drops Teaser For ‘Ring The Alarm’ As Fans Await Their ‘RE:Turn’

MAMAMOO Announces Comeback + Gears Up For A Concert

MAMAMOO Announces Comeback + Gears Up For A Concert