Popular K-Dramas Based On Webtoons That You Need To Watch

K-Dramas are spreading like wildfire these days. Trending worldwide for the edgy content they offer, even platforms like Netflix and Viki have realized the influence and started investing heavily in the Kdrama industry. A new trend that has picked up since 2016 and doesn’t seem to die any time soon in the K-Drama industry is the adaptation of popular webtoons.

A Webtoon natively referred to as Manhwa, is a type of digital comic with illustrations meant to be read on computers, and smartphones. Webtoons are already popular phenomena in South Korea. Also, given the immense popularity of dramas that are formulated from such a format, the frequency of webtoon-adapted K-dramas has surged. However, it comes with both pros and cons. Pro being the drama will already have a fanbase in the form of an audience that loves the webtoon. Con is that the drama will have to deliver on expectations already set by the webtoon.

Today, we are dropping down a list of K-Dramas based on equally popular Webtoons that recorded groundbreaking numbers/popularity. If you haven’t watched any of them yet (Spoiler Alert!), it’s time to make some notes here! Also, this article isn’t sponsored by Netflix! 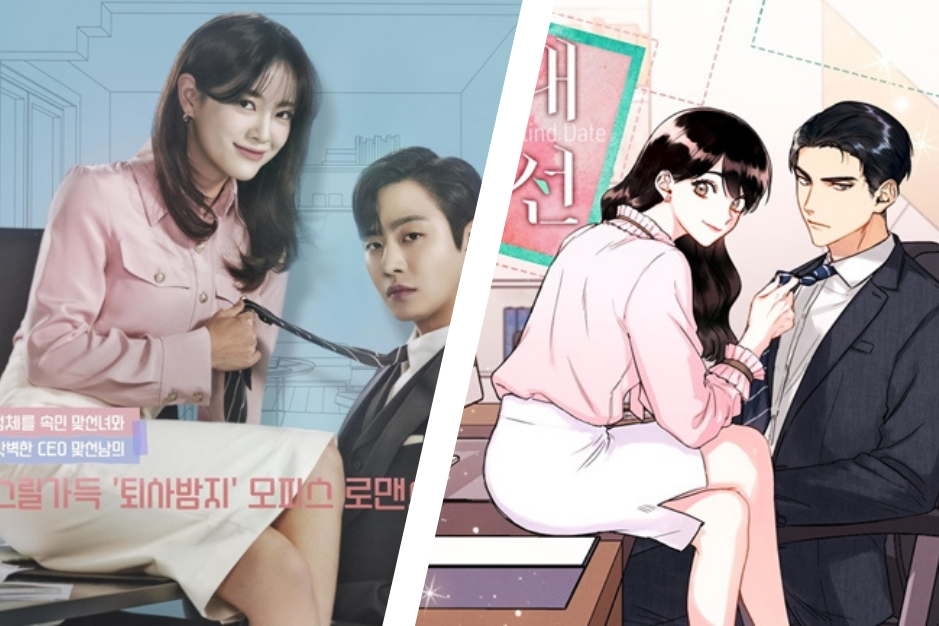 The most recent drama that took the internet by storm is ‘Business Proposal’. Based on the same-name webtoon by HaeHwa, it tells the story of Shin Hari, an employee at Go Food. At her friends’ behest, she goes on a blind date to ruin it. Things don’t go as planned when she finds out the date is her boss, who is unaware of her identity. Her boss, a workaholic, is seemingly impressed and decided to marry her. When she refuses due to her position, he proposes a plan to date. This is so he can get his grandfather to stop discussing his settling down.

The story is filled with hard-to-miss K-Drama clichés. Unlike most K-Dramas, the series doesn’t have a climax. It’s mostly sweet, smooth sailing, and perfect for someone who doesn’t like unnecessary tensions in the drama. And has interesting second leads. Feel like you have no chinggu? Business Proposal will be your friend for the 12 hours you spend watching the drama. A typical rich boy-poor girl drama, Business Proposal will make you laugh and go aww. 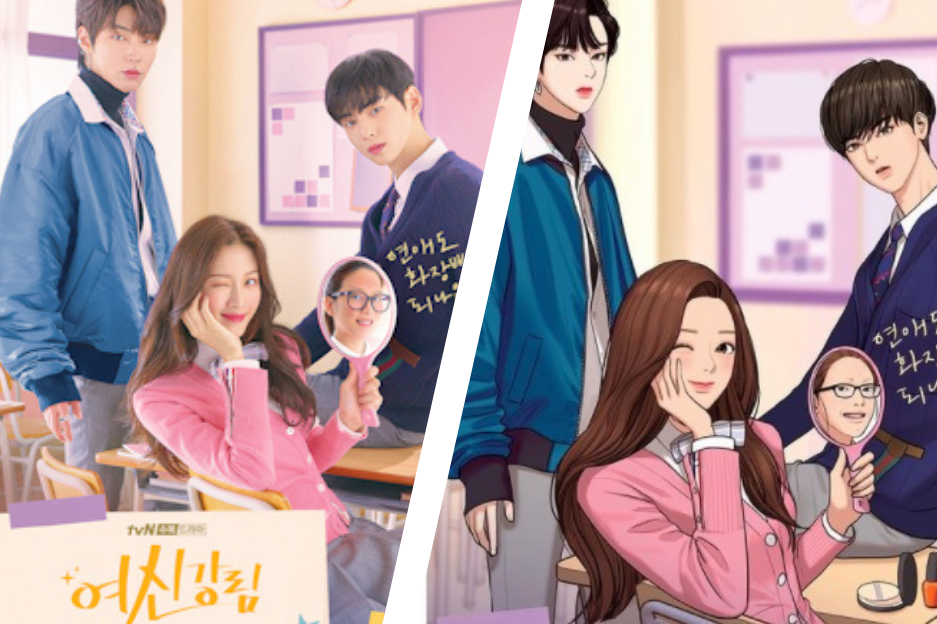 ‘True Beauty’ was a drama that instantly became well-known internationally. A few reasons include the casting, the romance and comical scenes and definitely a good OST lineup. This high school rom-com is based on the webtoon True Beauty by Yaongyi. It tells the story of a girl named Ju-Kyoung who is bullied for seemingly being ugly looking. Heartbroken by her crush and constantly bullied by her classmates, she decides to transfer school. At her new school, through the use of makeup, she becomes a gorgeous goddess and is liked by everyone. At first, only the handsome president of the class, Lee Suho knows the secret and accepts Ju-Kyoung the way she is. Eventually, all her friends and even bullies discover her secret which she tried hard to hide all along. Slowly, she realizes the true beauty lies within.

The drama further elevated the popularity of the main cast, Moon Ga-young and Cha Eun-woo, and it became a breakthrough role for Hwang In-yeop. If you like to watch love triangles and swoon-over-second leads, this drama is for you. 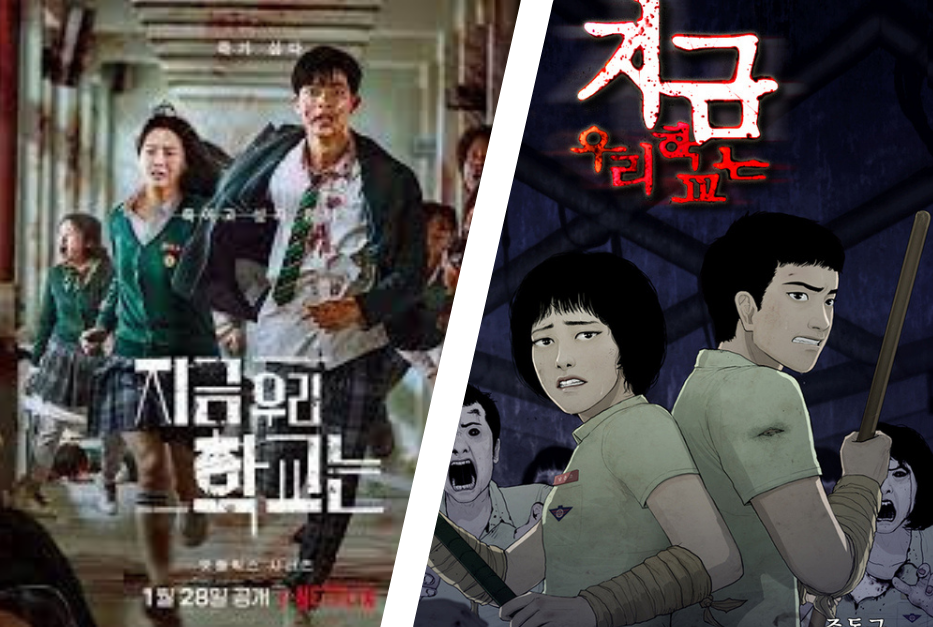 Based on the webtoon ‘Now at Our School’ by Joo Dong-geun, ‘All of Us Are Dead’ quickly became a top drama on Netflix worldwide. The story is about a bunch of high school friends fighting a zombie outbreak. With no basic amenities, they must use school equipment to survive. The story also focuses on friends’ relationships with each other. This 12-episode Netflix drama is gripping enough attention that will make you want to binge watch for the next 12 hours. If you indulge in the “Zombies and Aliens” genre, you should definitely watch it. 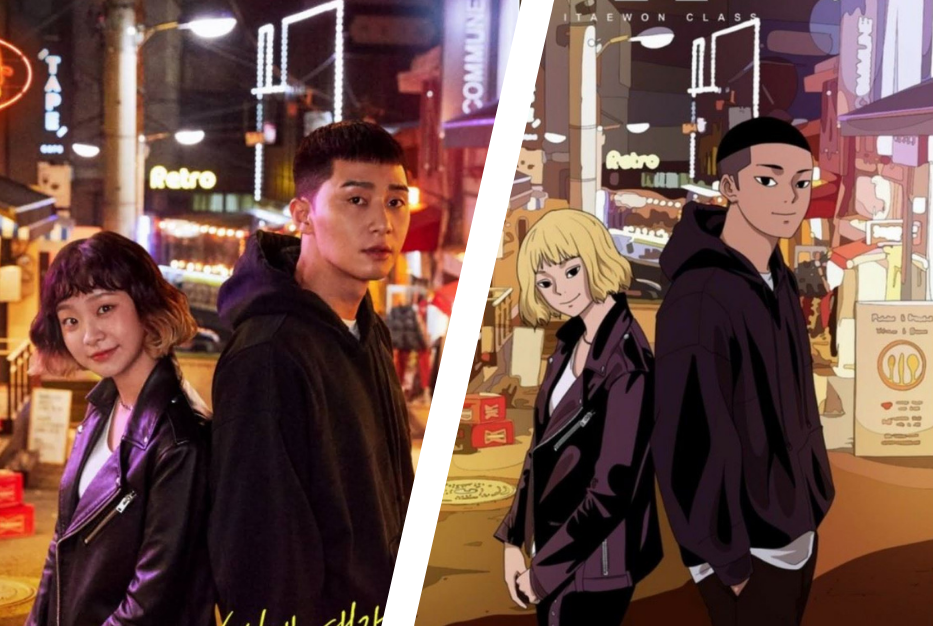 One of the most popular K-Drama of 2020, Itaewon Class portrayed the acting stretch of Park Seo-Joon. It also introduced the masses to adorable and amazing Kim Da-mi. Itaewon Class is about a man named Park Saeroyi who loses his father in an accident. The one who kills his father in the accident, Jang Geun-won, is the son of rich CEO under whose company Saeroyi’s father was employed. Saeroyi attacks Jang Geun-won to avenge his father but is prisoned instead. Fed up with how the rich try to alter the reality, he plans to avenge his father by defeating the Jang Corporation. He plans meticulously throughout the years. After a lot of ups and downs, he eventually becomes the CEO of a company called Itaewon Class.

This series is a personal favorite. The great story and acting are the essence of the drama. If you are feeling down in life and need a boost of motivation, start with the first episode today! 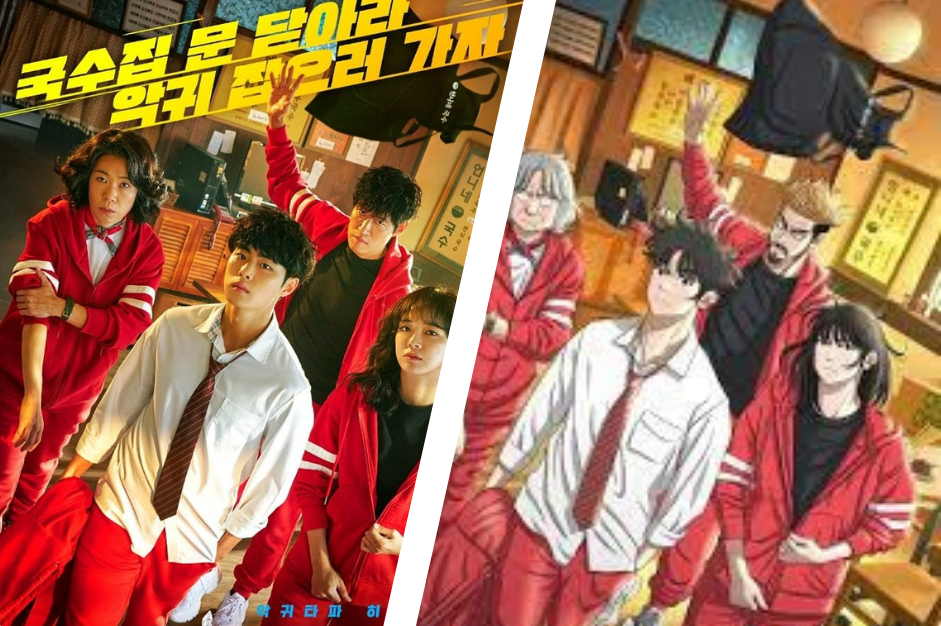 ‘The Uncanny Counter’ is a well-made package and one of the most celebrated K-drama of 2020. It offers the story of So Mun, a high schooler with a disability, who joins the Counters, a group of people fighting evil spirits that prey on humans. Based on the webtoon, Amazing Rumor by Jang Yi, the drama also depicts how the Counters help each other to deal with their pasts. You should definitely watch this drama, if horror mysteries are your thing. 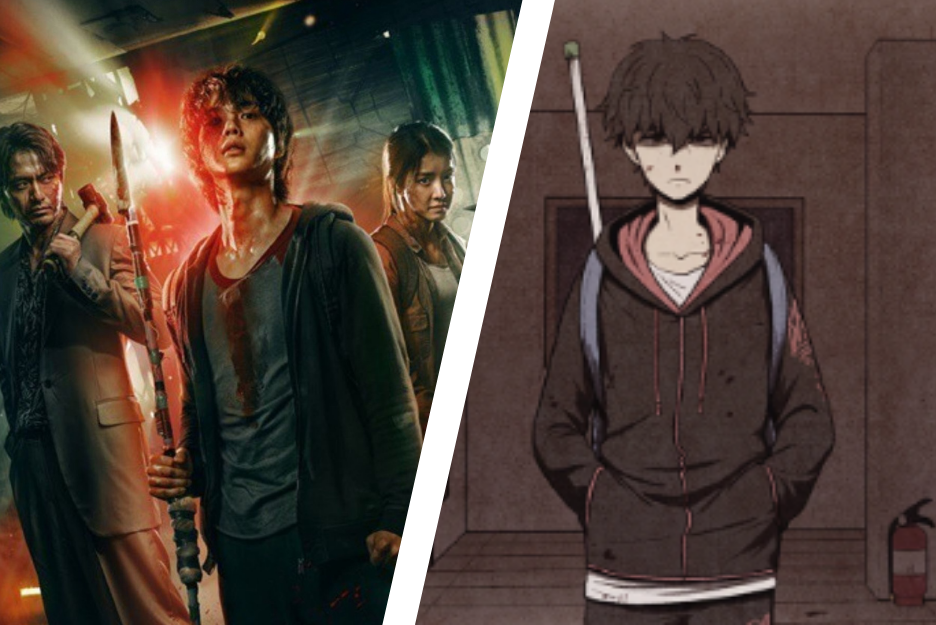 Another Netflix hit of 2020, Sweet Home is a 10-episode long Kdrama based on the webtoon of the same name, created by Kim Kan-Bi and Hwang Young-Chan. The story focuses on Cha Hyun-soo who moves into a complex called Green Home. Soon after, people inside the apartment complex are trapped because monsters are trying to wipe the humanity. Hyun-soo along with other tenants tries to survive through the apocalypse. Another Monster/Alien/Zombies genre drama that is chilling and gripping for its theme and life stories of the complex residents. 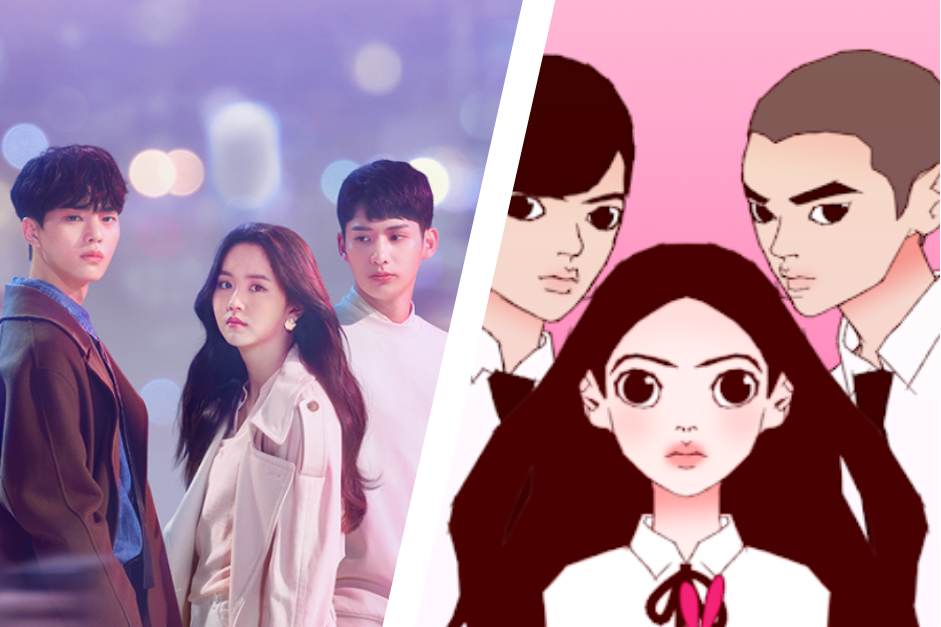 The only show on this list that has a second installment yet, it’s safe to say Love Alarm is a fairly popular drama.

Based on a webtoon of the same name by Chon Kye-young, the drama follows the life of high schoolers Kim Jo-jo, Lee Hye-Yeong and Hwang Sun-Oh. Kim Jo-jo uses an app called ‘Love Alarm’ that signals her someone who likes her is within a 10-meter radius. It’s a hooking love triangle also depicting a society greatly influenced by social media apps. In this drama, you will relive the K-Drama classic combinations of the rich boy-poor girl as well as romance blooming between two people struggling financially. It’s a clear call for people interested in K-Drama with Love triangle as a theme. Curious who Kim Jo-jo eventually choose? Watch and find out! 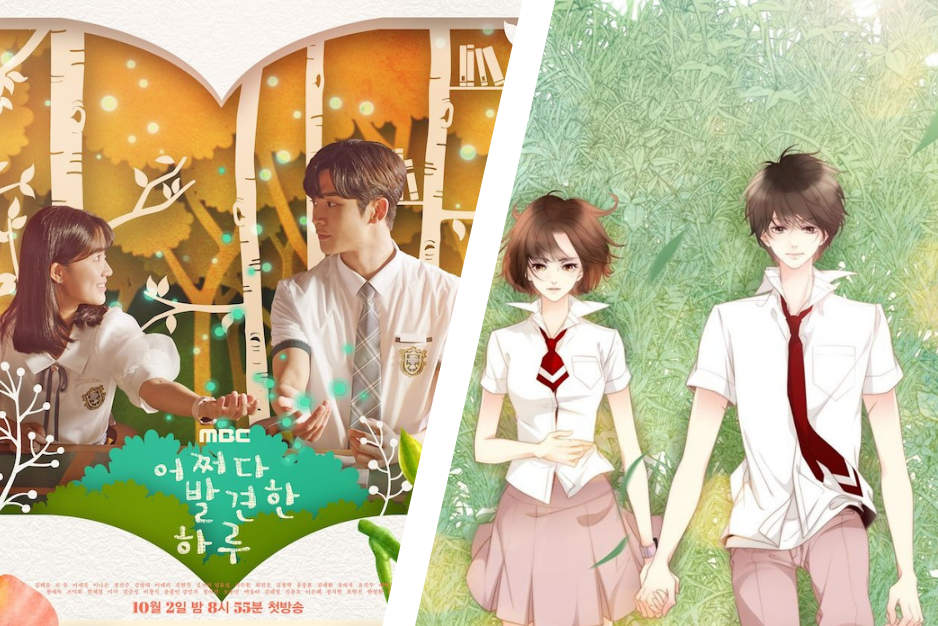 ‘Extraordinary You’ is a webtoon-based drama inside a webtoon. Confused? We felt the same when we first saw it but we swear you will get the hang of it! Based on the webtoon July Found by Chance by Muryu, the drama tells the story of Eun Dan-oh who discovers that she is actually not real but a character inside a comic. What’s more? she isn’t even the main lead, just an extra (Get it? Extra-ordinary?). Eun Dan-oh takes her destiny into her hands by trying to change her character’s limited role. Along the way, she even encounters a nameless student Number 13 who she names Haru and eventually develops feelings for him. However, writing her own story has consequences that Dan-oh soon realizes. The essence of this drama is its story. It’s highly creative and a personal recommendation simply on the basis of the story. Kim Hye-yoon emerged as a star in the series with a strong performance. If you are looking for that “something different”, Extraordinary You is your tea.

9. My ID is Gangnam Beauty 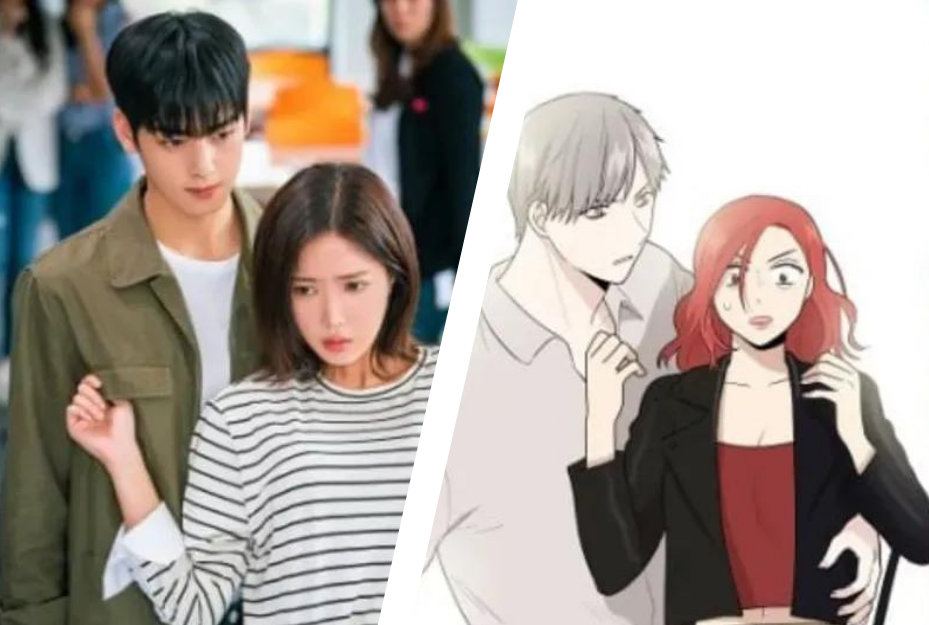 My ID is Gangnam Beauty depicts the story of Kang Mi-rae who goes under plastic surgery before starting college to escape her bullies and start afresh. However, it backfires when she is mocked for her artificial look and she is called by the name Gangnam Beauty. Based on the webtoon of the same name by Gi Meng-Gi, the drama name is drawn from the term ‘Gangnam Beauty’. Gangnam Beauty isn’t a compliment in Korea. It’s used for someone who altered their looks (face, body or both) heavily via plastic surgery. Although plastic surgeries are common and acceptable in South Korea, they are frowned upon if people go beyond certain extents. Why Gangnam? Because it’s a very popular and posh locality with about 36% of plastic surgery clinics in entire South Korea located there. She meets a classmate, Do Kyung-seok, from her elementary school who recognizes her from her dance moves, despite the change in her appearance. Because she made him laugh in his tough times, he grows a liking for her regardless of her looks. Yeon Woo-young, a chemistry lab assistant popular for his looks grows a liking to Mi-rae, first for her appearance and eventually for her personality. The drama offers a captivating love triangle and deals with issues of self-esteem and obsession with outer appearance. The biggest MVP in this drama is its daring theme. 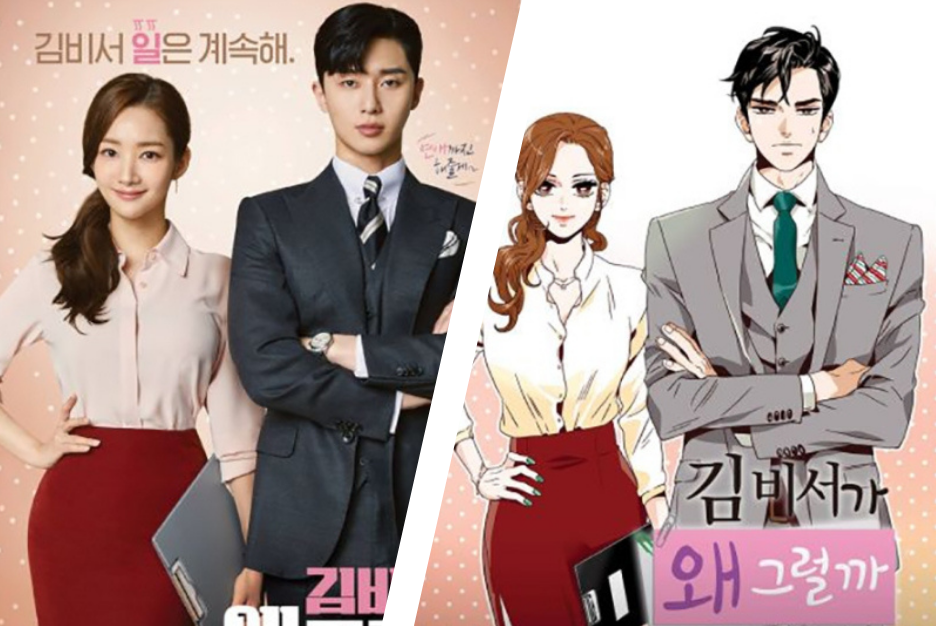 ‘What’s Wrong With Secretary Kim?’ traveled a lot before becoming a cult K-Drama. Originally, it was a novel of the same name by Jung Kyung-Yoo. Later, it was adapted into a webtoon and eventually a hit drama. ‘What’s Wrong With Secretary Kim?’ is a story about Lee Young-Joon, a rich CEO, and his secretary Kim Mi-so. After working for Young-Joon for 9 years, Mi-so decides to quit. This bothers the CEO who is used to her presence and unwillingly lets her go. He tries to make her stay and guess what? They fall in love! Well, there’s more to the story that’s best left for readers to discover on their own. The drama is a perfect example of a rom-com. I feel even the supporting characters developed a fanbase of their own. There are lots of nit-picks that make the drama a must-watch, like how to eat ramyeon properly and how to propose cutely. If you are looking for office romances, look no further friend. 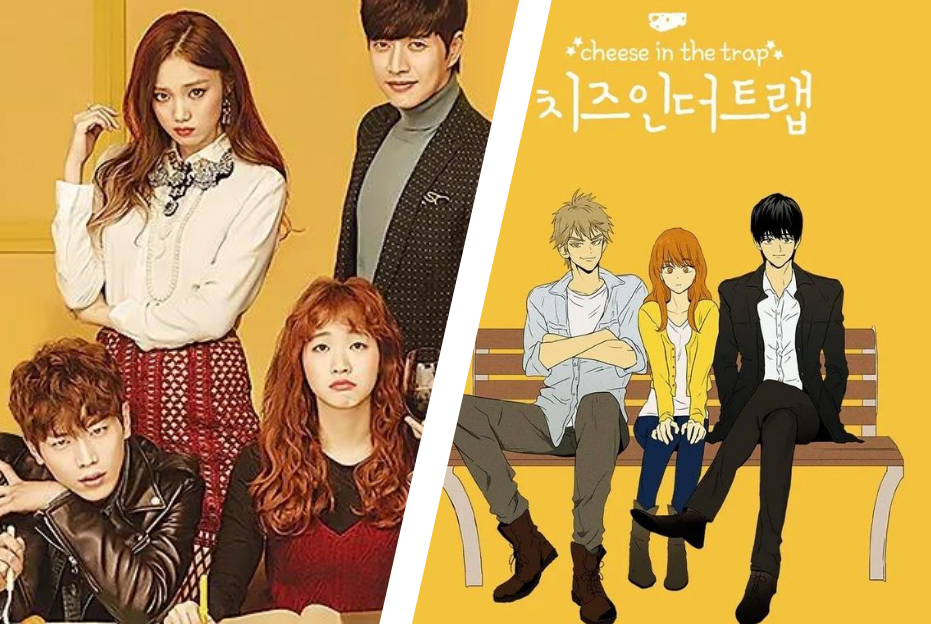 Cheese in the Trap is the only drama on the list to have both a drama and movie in its name. That in itself speaks for its popularity. The story is about Hong Seol, a hard-working college student embroiled between Yoo Jung and In-ho Baek. Yoo Jung is the “Mr. Perfect” of college: good looks, good scores, rich lifestyle. He is quiet but manipulative towards those he dislikes. In-ho Baek and Yoo Jung were childhood friends and had a fallout which makes the situation between Hong Seol and Yoo Jung quite awkward. Their relationship gets further complicated by the various schemes of Yoo Jung. Unlike most K-Drama the lead isn’t crafted as entirely black or white. He lurks in the grey for the majority of the drama, you will have to work to find if he wears horns or a halo. If you are looking for a love triangle to keep you on your toes, ‘Cheese in the Trap‘ is the best bet.

Which one is your favorite? Which one are you yet to watch? Comment below!

Meet The Winners Of The ‘THE FACT MUSIC AWARDS 2022’

Meet The Winners Of The 'THE FACT MUSIC AWARDS 2022'