Movie Review: Peninsula Is A Perfect Movie For Zombie Lovers

Starting the Halloween hype with Train to Busan's sequel!

Train to Busan is one of the best zombie apocalypse movies ever made. Peninsula being its much-awaited sequel was more than enough of a reason for me to watch it. Here’s what I think about it.

Train to Busan was released in 2016 and became the highest-grossing movie in Hong Kong, Malaysia, and Singapore and further has a global gross of $98.5 million. The plot moves around Seok Woo and his daughter who are on a train that travels from Seoul to Busan in order to meet the daughter’s mother. Unfortunately South Korea faces a massive zombie virus outbreak and the passenger on this train to Busan fight for their lives to escape the zombie bites.

Peninsula is a sequel but also a stand alone starring Gang Dong Won, who appeared in Train to Busan as well. The film was directed by Yeon Sang Ho. The film dropped in 2020 and grossed $42.7 million internationally. The film received mixed reviews but definitely did well among the fans. 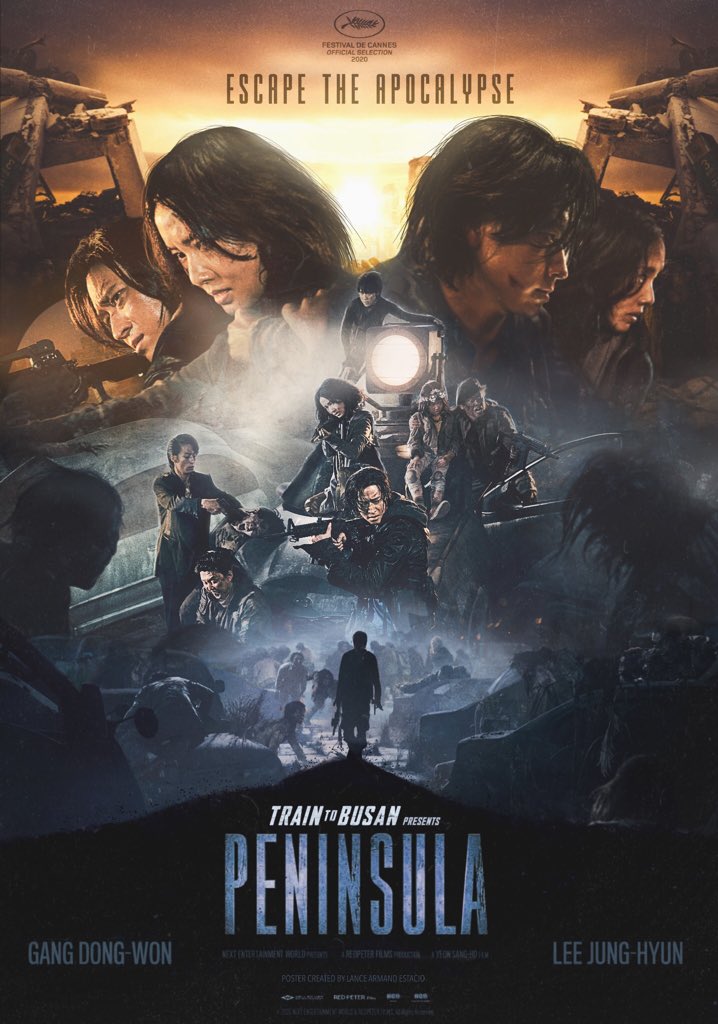 The first scene was set the during the zombie outbreak’s initial period, which was around the same timeline as Train to Busan, but the story revolves around Captain Jeong Seok and his family. He is a soldier and with his family consisting of his older sister, brother-in-law, and her nephew, are on their way to the refugee ship that will soon sail away from South Korea.

On their way a family pleads for help as their car has crashed. Jeong Seok is reluctant, though he wants to help. But after noticing the blood on the man’s shirt, he decides to not take any chances. The injured man’s wife begs them to take at least their daughter along but Jeong Seok can’t just trust them and abandons the family with a heavy heart, for he has a family of his own to take care of.

An infected man who ends up on the ship happens to be in the same room as Jeong Seok’s family. The infected man is fully mutated and attacks the people in his room and Jeong Seok’s nephew becomes one of his victims. His mother wraps her arms around her little boy and choses death, irrespective of Jeong Seok attempts to pull her out. With no choice left, Jeong Seok shuts the door and restrains his devastated brother-in-law, Chul Min, from making a terrible move and causing harm to the rest of the survivors in the ship.

From there the story jumps four years in to the future where both these men have survived as refugees in Hong Kong, facing bullying and slurs for being South Koreans, the land God has forsaken. These two men get acquainted with some Chinese thugs, whose chief is an American man. The American, without delay, gets right into the matter and presents huge prize money for a Herculean task.

Rumour has it that some people are going back down to the peninsula (Korea) to retrieve a huge sum of money that was stranded in the trucks. The thug leader puts together a team of South Korean refugees to get back the money in return for a huge share of 2.5 million dollars per head. Jeong Seok feels compelled to since his brother-in-law wants to take up the offer and he just cannot watch his only family walk in to the den of zombies.

They don’t take much time to find the truck that has the money, but what they do not know is that humans have survived and are still living there. This human population is mostly comprised of ruthless savages looking for ways to survive. These callous men aka Unit 631 murder the survivors with much hostility, especially if they are not a part of their unit.

Unit 631 begins to attack the refugees having no knowledge about the truck or the money. They just assume that the food is being taken. The refugees are attacked with fire crackers in order to lure a swarm of zombies towards them. This causes an accident that ends up killing the driver. For Unit 631, watching humans fight and get killed by mutants is a sport. Another of Jeong Seok’s teammate is heartlessly murdered by the sergeant of the unit, while the brother-in-law gets kidnapped unintentionally, leaving our main lead under the false impression that his brother-in-law is dead.

Jeong Seok is saved by a young girl, Joon, who is talented in car racing. Rash driving and car racing are present throughout the film that heavily gave a Fast and the Furious vibes. She can easily beat Dominic Toretto, given her experience driving away from zombies for so long.

In their safe haven, Jeong Seok met someone whom he never thought he would ever see again. It was the mother, Min Jung, the same woman he abandoned four years back! What a twist of fate?

When enquired, he confesses the truth to them about the money and life outside this zombie land. He also confesses that he is the same person who left them behind four years back, as guilt takes over him when he got to know that little Yu Jin wanted to save him from the zombies. Min Jung who is desperate to get her children out of this forbidden land, foresees his abandonment and agrees to help him steal the truck and escape this fate. Meanwhile Captain, whom they consider their grandfather, gets in touch with Major Jane who promises to rescue them. Stealing the truck wouldn’t be so hard. The only catch is that Jeong Seok learns about Chul Min.

In the mean time Caption Seo, the head of the entire unit and his close apprentice find out the truth about the money and make a deal with the American thugs through the satellite phone lying in one of the bags. This deal is kept completely hidden from the unit.

With two parties fighting for freedom from the peninsula, Unit 631 behind the Jeong Seok & team, and with zombies in every nook and corner, will Jeong Seok and team make it out alive?

I really enjoyed the film. My zombie film cravings were very well satisfied. It was definitely a good watch and was super emotional in some scenes. Many zombie films show loved one’s sacrificing themselves to save others, and yes Peninsula certainly has some of these scenes as well. Some might find it cliché, but I believe that clichés play an integral roles in movies, especially to create impact.

Apart from the plot, one of the favorite things about the movie is that it had very strong female characters. The mother gives her all to protect her family. Joon is talented and is also super determined to protect her family and saves people from danger. These women can handle guns like pros and are badass drivers. Many instances in the movie show their strong, fierce characters with hearts of gold. I love how well the characters were portrayed.

I hope I’ve convinced you to watch the movie. If not, then check out the trailer and the next thing you’ll be doing is getting ready to watch it.

Have you watched this movie? Let us know in the comment section!