'EPIK HIGH IS HERE' with the second part of the album plus a tour! 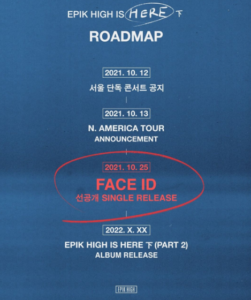 Next on the roadmap, the group would be releasing their single titled ‘FACE ID’ on October 25, whereas the actual album release date is yet to be announced, which will be released in the year 2022.

Epik High debuted on October 23, 2003 with their first album ‘Map of the Human Soul’. The group has garnered fame and success as they have received international acclaim and have several music awards in Korean. In April 2016, the group became the second ever Korean artist to perform at the Coachella music festival. They even made waves at the South by Southwest in 2015. The group has been known as one of the pioneers of Korean hip-hop ever since their formation in 2003.