BTS is gearing up to release a new song for the 2022 FIFA WORLD CUP.

The septet will take part in several events as the #7 representative of “Team Century,” the official ambassador team for Hyundai Motors’ environmental initiative, “Goal of the Century.”

This announcement was made as part of the Goal of the Century campaign. The Goal of the Century initiative, which will see people from all around the world united through soccer to achieve carbon neutrality at the 2022 World Cup, was launched by Hyundai Motor Company in April, together with the Federation Internationale de Football Association, Hyundai Motor Company ( FIFA ), according to a company announcement.

Anyone interested in taking part can access the FIFA app and make their sustainability pledge. Through a lottery among the applicants, Hyundai Motor Company and FIFA will choose 11 persons (each accompanied by one additional person), and the 11 winners will be given tickets for one of the three group stages of the national team they support (round of 32), as well as travel and lodging vouchers. It offers a package of intuition that contains various things to provide an opportunity to directly feel the heat of the World Cup in Qatar. 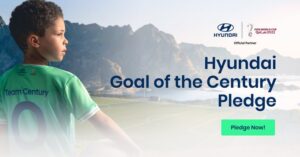 The #Hyundai Goal of the Century Pledge event is now LIVE!
Make an eco-friendly pledge and win tickets to see the FIFA World Cup 2022™ live.

The World Cup Song Collaboration Project will be carried out by BTS in addition to promoting the “Hyundai Goal Of The Century Pledge.” The song is scheduled for release in the second half of this year.