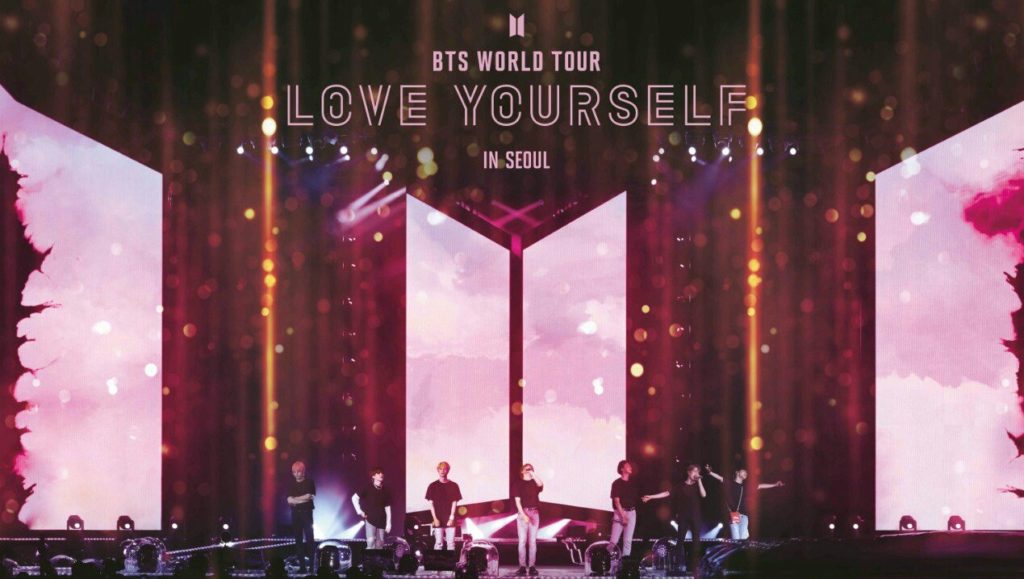 The one day event on 26th January was witnessed by Indian fans only on 2nd February, a week later than the rest of the world. It was announced today (20th February) that the concert movie was seen by 340,000 moviegoers in South Korea and 1.62 million overseas, bringing it to a total of 1.96 million viewers.

‘Love Yourself in Seoul‘ was screened in 108 regions and over 4,600 theaters making it the largest ever screening cinema event. Within the first day of the concert film’s screening, the movie was watched by 1.28 million people overseas in 4,100 theaters.

BTS announced yesterday (19th February) that they would be embarking on the ‘Love Yourself: Speak Yourself‘ World Tour on 4th May at the Rose Bowl Stadium in Los Angeles after their current ‘Love Yourself‘ tour concludes.

In hope that the commercial success of the BTS movies ‘Burn The Stage‘ and ‘Love Yourself in Seoul‘ in India might earn them a concert date, Indian ARMYs took to social media platform Twitter and trended the hashtag #BTSTourInIndia to #1 in India with over 50,000 tweets (at the time of writing).

Several major Indian BTS fanbases (national and regional) have also participated in the Twitter movement. The tweets range from offers to try delicious Indian food to visiting various monuments. Check out some of the #BTSTourInIndia tweets below!

Curry ? You like curry ?
We GOT unlimited curry and so many options to choose from. With best Buttter naan. Fresh fresh. Garaam garaam. Only when you guys come for #BTSTourInINDIA@BigHitEnt @BTS_twt #BTSIndianARMYs

We all know how @BTS_twt loves a good sauna day and they legit need a relaxing spa vacation. No worries , our incredible kerela got beautiful resorts with ayurvedic spas.💜💜💜💜💜💜 @BangtanINDIA #BTSTourInINDIA #BTSArmy (pc Google images) pic.twitter.com/Eykxkb4Pcr

#BTSTourInINDIA @BTS_twt
Among the most prominent heritage sites in India that have made an impact in the world is the Golden Temple.
The entire top of the temple is made of pure gold, adding to the beauty of the temple.
Continued- pic.twitter.com/ao1Aiypuvc